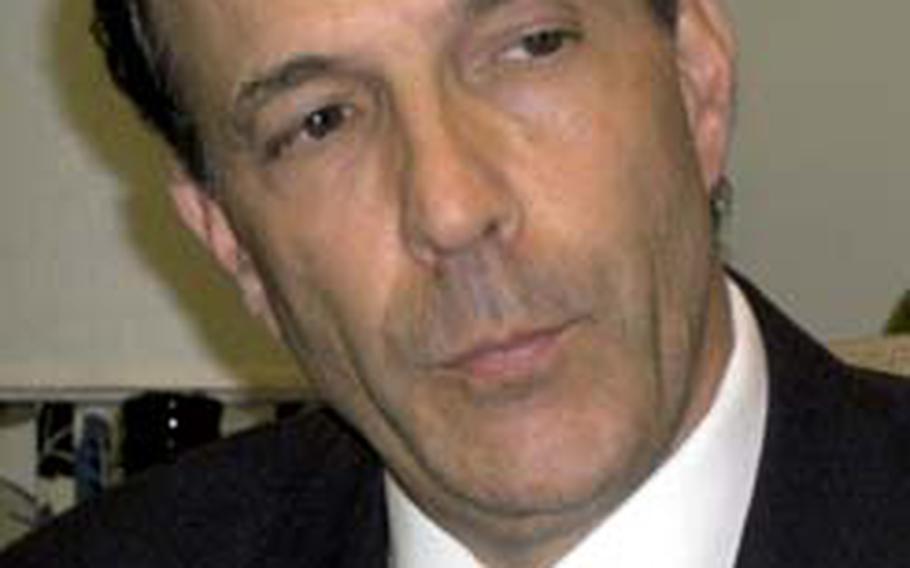 John Roos, U.S. ambassador to Japan, said Wednesday that moving Marine Corps air operations from Futenma to Camp Schwab is the only option to reduce the U.S. footprint on Okinawa. (Chiyomi Sumida / Stars and Stripes)

GINOWAN, Okinawa &#8212; There is no viable alternative to moving Marine air operations to a new air facility on Camp Schwab, the U.S. ambassador to Japan said Wednesday.

However, a minority party has announced it would consider pulling out of Japan&#8217;s new coalition government unless the Marine air units move somewhere else &#8212; preferably outside Japan.

During an interview with Stars and Stripes at the consul general&#8217;s residence in Ginowan, on a ridge overlooking Marine Corps Air Station Futenma, Ambassador John Roos said his three-day visit to Okinawa made him realize how important it is to reduce the U.S. military&#8217;s footprint on the island.

He said a visit to the island&#8217;s Peace Prayer Memorial Park, where the names of the 240,856 people who died during the Battle of Okinawa at the end of World War II are inscribed on black granite walls, was a moving moment.

&#8220;It&#8217;s a very powerful statement of the necessity to maintain peace and stability in this region of the world,&#8221; Roos said, adding that the Okinawa bases are important to accomplish the U.S. commitment to defend Japan and to deter aggression in the region.

The 2006 bilateral agreement to realign U.S. troops in Japan accomplishes those goals and reduces the U.S. presence on Okinawa, he added. Moving Marine air operations to Camp Schwab would lead to closing most of the U.S. bases south of Kadena Air Base and transferring more than 8,000 Marines and their families to Guam.

But it&#8217;s all interconnected with maintaining the region&#8217;s security, Roos stressed.

The 2006 agreement was reached with the more conservative Liberal Democratic Party, which ruled Japan almost unchecked for 54 years. The new more central-left government of Prime Minister Yukio Hatoyama took control in September and promptly called for a review of the agreement.

Roos said he understood the need for the review.

&#8220;When the Obama administration came into power, it very naturally reviewed a lot of policies,&#8221; he said. &#8220;They reviewed the realignment roadmap, and they pretty quickly came to the conclusion that it&#8217;s the best and only viable option.&#8221;

Meanwhile, in Tokyo on Thursday, Mizuho Fukushima, leader of the Social Democratic Party, a junior partner in Hatoyama&#8217;s government, threatened to break the coalition if the government goes along with the Camp Schwab option for MCAS Futenma.

&#8220;The SDP and I have a major decision to make if the Cabinet decides to keep the base within Okinawa,&#8221; she said at the beginning of a meeting of party officials Thursday, according to NHK radio news.

Hatoyama&#8217;s coalition needs the cooperation of the pacific SDP in order to smoothly proceed with its agenda.