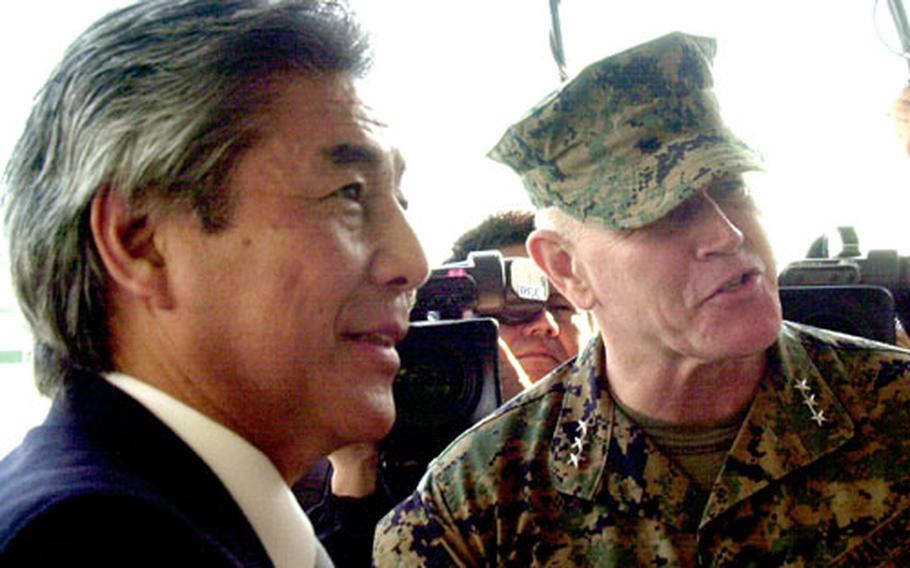 NAHA, Japan &#8212; There will be no change under the Obama administration in a plan to realign U.S. forces in Japan, Japan&#8217;s minister of foreign affairs said Sunday before wrapping up a one-day trip to Okinawa.

Hirofumi Nakasone is one of Japan&#8217;s key players in carrying out the restructuring of the U.S. military in Japan, a plan that includes moving about 8,000 Marines and their families from Okinawa to Guam once a new Marine air facility is built on Camp Schwab to replace Marine Corps Air Station Futenma.

It was Nakasone&#8217;s first visit to Okinawa since taking office in September. His tour included meeting with Okinawan and U.S. military officials and visiting Camp Schwab.

During a news conference in Naha, the foreign minister said he spoke with his U.S. counterpart, Secretary of State Hillary Rodham Clinton, soon after she assumed office. He said they both agreed on the importance of carrying out the realignment plan the countries signed in May 2006. He added that both countries are presently working on a new agreement to pursue projects agreed to in what is being called the &#8220;Realignment Roadmap.&#8221;

In the roadmap, Japan agreed to allocate $6 billion of the estimated $10.3 billion needed to move Marines to Guam. The new agreement would ensure the money Japan spends would not be redirected to other projects.

Following the meeting, he visited a hill on the base overlooking the planned runway site, and could plainly hear the amplified chants of a dozen or so anti-base protesters gathered at the base&#8217;s main gate.

Later in the day, he visited Gov. Hirokazu Nakaima in his Naha office, where he reasserted his position to continue with the realignment plan without any changes.

For his part, Nakaima made his case for moving the airstrip farther from the shore to reduce the effect it would have on local residents and the environment. The new airstrip would replace Marine air operations at MCAS Futenma, located in an urban area. In 2004 a Marine helicopter crashed on a university campus next to the airfield.

At a press conference, Nakasone told reporters that altering the plan was not an option.

&#8220;The present plan was decided after giving thorough consideration from multilateral viewpoints,&#8221; he said. &#8220;Therefore, it would be difficult to change it without a convincing and rational reason.&#8221;

It also would &#8220;answer voices of Okinawa to reduce the burden&#8221; stemming from the island&#8217;s heavy U.S. military presence, he said. U.S. bases cover about 21 percent of the prefecture&#8217;s main island. The realignment plan would eventually close Camp Kinser, Camp Lester, part of Camp Foster and MCAS Futenma.

&#8220;I was convinced that carrying out the realignment projects will contribute to reduce the burden of Okinawa, therefore I strongly feel that it must be realized at any cost,&#8221; Nakasone said.