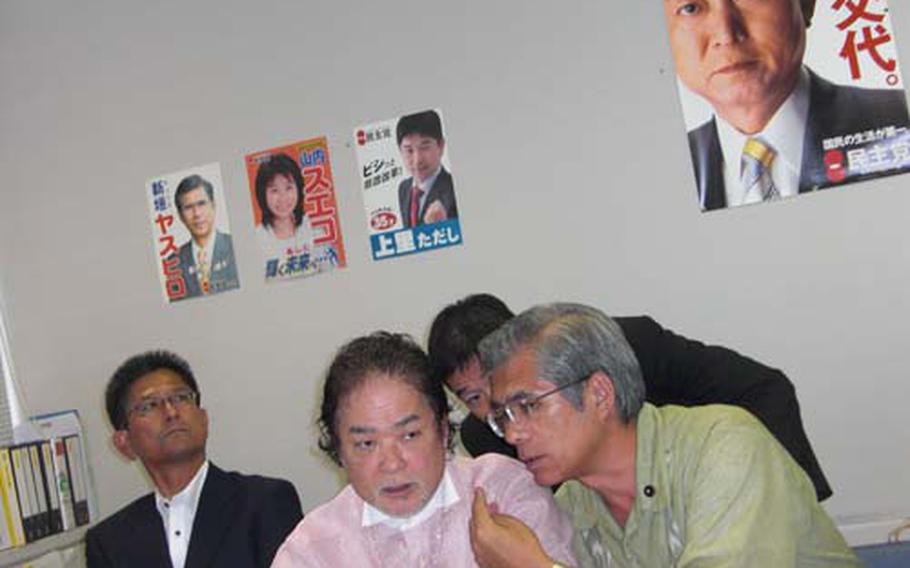 Shoukichi Kina, center, leader of the Okinawa chapter of the Democratic Party of Japan, consults with other party leaders prior to a news conference Tuesday after meeting with Okinawa Gov. Hirokazu Nakaima. The local chapter of the party that swept the Liberal Democratic Party out of power Sunday wants to quash the plan to build a new Marine air facility on Okinawa. (Chiyomi Sumida / S&S)

NAHA, Okinawa &#8212; Flexing their muscles after a landslide victory Sunday, Okinawa members of Japan&#8217;s new majority in the Lower House say they will push for a change in the 3-year-old bilateral agreement to realign U.S. troops in Japan.

In a meeting with Okinawa Gov. Hirokazu Nakaima on Tuesday, leaders of the local chapter of the Democratic Party of Japan said they will push the national DPJ &#8212; which won 308 of the 480 Lower House seats &#8212; to return to its activist opposition role to U.S. bases in Japan.

The DPJ and its allies won all four seats that were up for grabs on Okinawa. The party&#8217;s national victory ended 50 years of almost unbroken rule by the conservatives.

Meanwhile, the State Department said the U.S. will not renegotiate the so-called Roadmap to Realignment with Japan, a military pact the two countries signed in May 2006 and reaffirmed earlier this year.

&#8220;The United States has no intention to renegotiate the Futenma replacement facility or Guam relocation with the government of Japan,&#8221; Kelly told reporters.

During a news conference following his meeting with Nakaima, local DPJ leader Shoukichi Kina said the quick response from the State Department was actually a good sign.

&#8220;The fact that the U.S. government expressed its intention to not renegotiate means the start of renegotiation,&#8221; said Kina, member of the House of Councilors, Japan&#8217;s Upper House. &#8220;Now, it is our responsibility to gear the negotiation to a better direction.

&#8220;The consensus on Okinawa is to move operations at Futenma out of Okinawa and, preferably, outside Japan. ... Now is the time that our determination will be tested.&#8221;

DPJ leader Yukio Hatoyama, the presumptive new prime minister, has opposed the agreement, but a DPJ spokesman in Tokyo said Tuesday evening that no decision had been made whether to reopen negotiations on U.S. military realignment.

Under the roadmap plan, the Futenma air station, in the middle of a sprawling urban center on Okinawa, would close once a new air facility is built on Camp Schwab in the rural northeast of the island. Also, major Marine commands, involving about 8,000 personnel, would transfer to Guam. Japan has agreed to fund about 60 percent of the estimated $10 billion price tag for the Guam move.

During the run-up to the election, the DPJ toned down its opposition to military matters, such as the realignment plans and providing financial support for the U.S. bases, while focusing on domestic issues.

Kelly refused to go into details about what the U.S. expects of Japan, saying the U.S. will wait to see what direction the new government will take. He also declined to directly address the DPJ&#8217;s announcement that it will end Japan&#8217;s refueling operations in the Indian Ocean in support of NATO&#8217;s actions in Afghanistan at the end of the year.

&#8220;We will work closely with the new Japanese government in moving toward denuclearization of the Korean peninsula, addressing the threat of climate change and increasing the availability of renewable energy, bringing stability to Afghanistan and Pakistan, and addressing international humanitarian and health issues,&#8221; he said.

Kina and leaders of the party&#8217;s Okinawa chapter urged Nakaima to join their efforts to scrap the realignment project, but Nakaima maintained a cautious stance.

Nakaima personally opposes the Futenma project, but he said he had to abide by the agreement reached by the government in Tokyo.

He has pushed, instead, for moving the project&#8217;s runways farther out to sea to protect the village of Henoko, which is adjacent to Camp Schwab.

&#8220;Although it would be ideal to move the facilities outside Okinawa &#8212; in reality, to remove the immediate danger posed by the existing facility &#8212; we have long maintained that there would be no choice but to move them to Henoko,&#8221; Nakaima said.