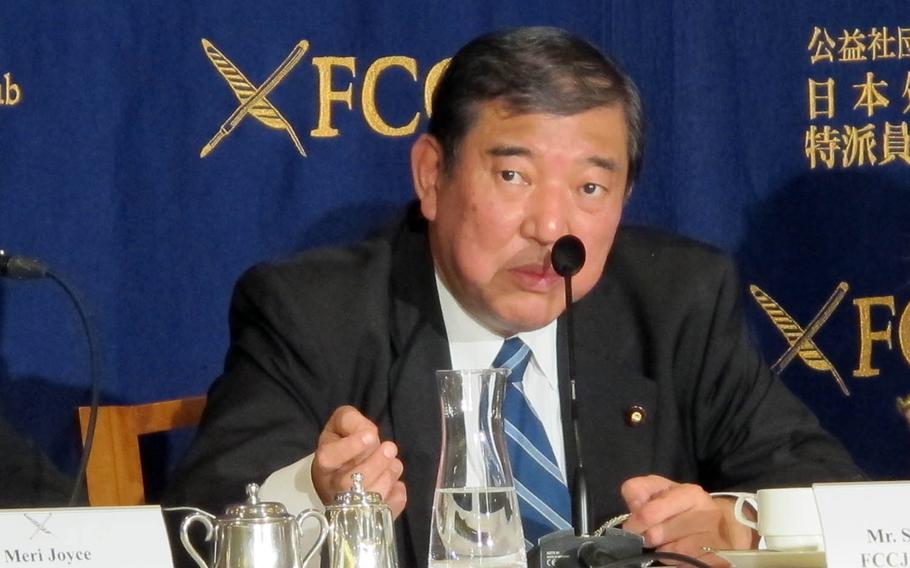 TOKYO — Japan should take a greater security role in advance of “hard negotiations” it might face with President-elect Donald Trump, a prominent member of Japan’s ruling party said Monday.

Diet member Shigeru Ishiba, a former defense minister and internal rival to Prime Minister Shinzo Abe, said that while the U.S.-Japan security alliance’s importance cannot be ignored, Tokyo’s policies should rely more on its needs and less on Washington.

“Japan needs to put forward its own diplomatic and security proposals ... this is necessary to go into these very hard negotiations with Mr. Trump,” Ishiba said. “If we look at the situation of the U.S.-Japan alliance, I believe it is very necessary to have an increase in the mutual capability of the two countries.”

Trump said during campaign speeches that Japan was not paying for the basing of about 50,000 U.S. troops in the country, then later said it was not paying enough.

Japan pays an average of 189.3 billion yen per year — which has fluctuated from $1.7 billion-$2 billion depending on the exchange rate — to support U.S. bases in the country as part of a five-year deal signed in 2015.

Japan also spent 176 billion yen in 2016 toward realignment of U.S. forces in the region, which includes transferring Marines to Guam in the 2020s.

U.S. bases in Japan cost $5.5 billion in 2016, a figure that doesn’t include $1 billion in Japan-provided labor, according to the Pentagon’s 2017 operation and maintenance overview. Half of the $5.5 billion went toward U.S. personnel paychecks and costs.

Ishiba said he doesn’t expect a direct request for cash once Trump gains a full understanding of the alliance, nor would Japan look upon it favorably.

“It would be very strange for Japan to say, ‘Oh, we’re very sorry, we’ll pay more,” said Ishiba, who added that he was speaking personally and not on behalf of the prime minister.

However, it would be equally strange for Japan not to offer anything more to the security relationship, he said.

Rather than look primarily at payments, the countries should examine whether the Japan Self-Defense Forces can capably take on some of the security duties that the U.S. assumes.

Japan’s payments for high-quality military repair facilities and storage of vast amounts of fuel provide the U.S. with strategic advantages that Trump will see once he assumes office, Ishiba added.

Ishiba shares something in common with Trump: a history of support at lower levels that hasn’t always been shared by lawmakers within his party.

In 2012, Ishiba won almost twice as many votes as Abe for his party’s leadership in a first round that included Liberal Democratic Party members and elected officials.

In the lawmaker-only second vote, Abe surpassed Ishiba and went on to become prime minister.

Ishiba quit Abe’s cabinet in August and is considered a potential challenger to Abe for the party’s leadership in 2018.

Ishiba added that Trump’s nominee for national security adviser, Michael Flynn, “has a very accurate understanding of the importance of the alliance between the U.S. and Japan.”

Ishiba called the discussion “one of the most impressive, meaningful meetings” he has had in recent times.

Flynn stated in a book published in August that his primary security focus is “radical Islamic terrorism.” Some analysts have criticized the looming appointment, citing a Twitter comment stating that “fear of Muslims is RATIONAL” as improper and beyond the goal of fighting terrorism.