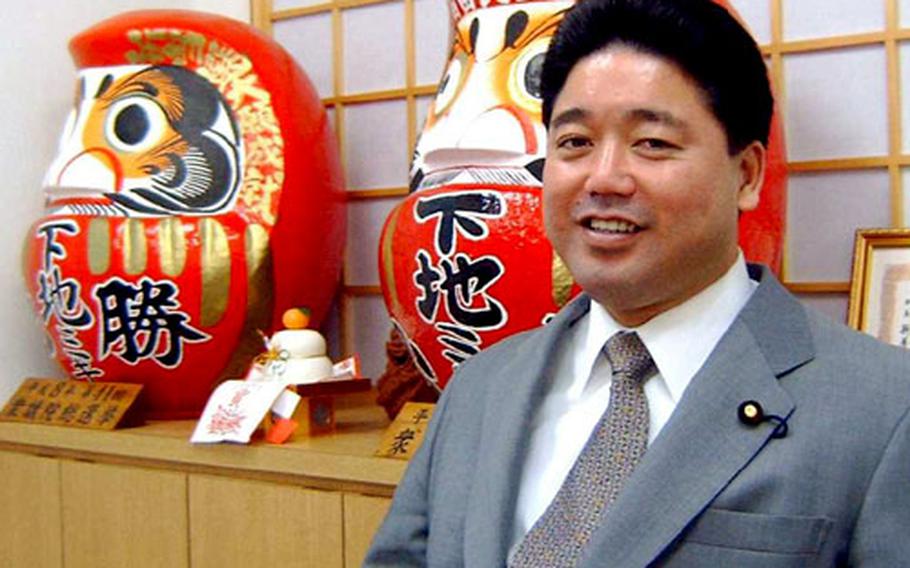 NAHA, Okinawa &#8212; An Okinawa representative to Japan&#8217;s Diet is hoping to get help from his South Korean counterparts in changing the U.S.-Japan status of forces agreement.

For years, Okinawans have insisted on making major changes to the SOFA but their pleas have fallen on mostly deaf ears in Tokyo.

But now, Mikio Shimoji said, he sees South Koreans&#8217; recent demands to revise the SOFA between the United States and that country as an opportunity to address the issue on a united front.

Shimoji, a member of the ruling Liberal Democratic Party, came away from a recent South Korean visit convinced the two countries could work together to draft a revised SOFA &#8220;for a better working relationship and more equal partnership&#8221; with the United States.

&#8220;I do not see any problem with Japan and South Korea having a common SOFA with the United States,&#8221; he said during a recent interview in his Naha office.

But the U.S. military in Japan has indicated it sees little need for revising the SOFA.

&#8220;It&#8217;s a living document that has served us well for almost 50 years,&#8221; said Col. Victor Warzinski, director of public affairs for U.S. Forces Japan. He said the U.S.-Japan Joint Committee meets every other week and always is open to fine-tuning the interpretation of the pact with new operational guidelines.

Shimoji said the current U.S.-Japan SOFA, signed in 1960, was devised in a climate in which Japan still was seen as much less of an equal partner.

&#8220;Especially the judicial arrangements,&#8221; Shimoji said. &#8220;People are now beginning to feel that portion of the pact is unfair.

&#8220;I understand the purpose of the agreement is to protect human rights of American citizens, but Japan is no longer what we were 40 years ago,&#8221; he said. &#8220;The agreement has not caught up with the changes that took place since then.

&#8220;The living standard has remarkably improved and the Japanese people&#8217;s awareness of human rights has greatly changed.&#8221;

The U.S.-Japan agreement stipulates that U.S. military personnel suspected of committing crimes remain in the custody of the U.S. military until indicted in a Japanese court, except where an arrest was made outside a military installation.

In the wake of the 1995 abduction and rape of a 12-year-old girl by three U.S. servicemen on Okinawa, the two sides agreed to allow an early turnover of custody in cases involving murder and grievous arson and rape.

Many Okinawans, however, have indicated they want a wholesale revision of the SOFA. The exception rule has been a source of frustration, Shimoji said. Two cases especially have raised concerns: the delay of turning over an Air Force staff sergeant charged with rape in June 2001 and the recent attempted rape case involving a Marine major.

Okinawa police presented an arrest warrant against Maj. Michael Brown on Dec. 3, but U.S. authorities refused to turn him over until he was indicted in Naha District Court on Dec. 19.

That prompted the Okinawa Prefectural Assembly to adopt a protest resolution demanding that the SOFA be revised.

The delay in turning over Brown was &#8220;unacceptable because it negates Japan&#8217;s legal system and infringes upon the sovereignty of Japan,&#8221; the Assembly&#8217;s resolution stated.

Some Assembly members complained that the U.S. military was using the SOFA to shield Brown.

U.S. military officials point out, however, that Brown was restricted to base in the interim and was made available for questioning by Japanese police whenever they requested. Brown also accompanied police to the alleged scene of the attempted rape to &#8220;re-create&#8221; what he claimed happened.

Shimoji, 41, says he supports the U.S.-Japan security alliance. Under the present global political climate, the security partnership with the United States is of utmost importance to Japan, he said.

&#8220;U.S. Forces in Japan play a vital role in maintaining the peace and stability of Japan as well as the rest of the region in Asia and the Pacific,&#8221; he said. &#8220;With that in mind, understanding and support by the people for the military presence is also essential.&#8221;

Warzinski said he has seen no specific proposals for changes in the SOFA in Japan. The SOFA with South Korea was renegotiated just two years ago, he said.

He called SOFAs convenient targets for politicians&#8217; and activists&#8217; anti-base campaigns, but said, &#8220;I wonder if they&#8217;ve really worked out the ramifications of wholesale changes in the agreements.&#8221;

Still, Stratfor, an independent intelligence company that provides its clients with geopolitical analysis, has reported that a united campaign to revise the SOFAs could worry officials in Washington.

&#8220;Were Japan and South Korea to exchange information while drafting new SOFA proposals, the United States likely would find it more difficult to tailor the agreements to its particular concerns in each country &#8212; any concession given to one would be requested by the other,&#8221; stated a recent Stratfor report.

&#8220;This could lead either to weaker SOFAs or to heightened tensions between Washington, Tokyo and Seoul as claims of inequality and unfair agreements abound,&#8221; the report concluded.

Shimoji said his four-day visit to South Korea during the New Year&#8217;s holiday convinced him of the need of a Japanese-South Korean effort to change their SOFAs with the United States. He said he plans to host symposiums in Japan and South Korea next month to gauge support for such a joint effort.

His visit to South Korea included a meeting with the families of two schoolgirls crushed to death last June by a U.S. armored vehicle. The acquittal of two U.S. soldiers at a subsequent court-martial spurred nationwide demands for changes in the existing SOFA and was a campaign issue of President-elect Roh Moo Hyun.

&#8220;Despite his daughter&#8217;s violent death, he told me that he had no bitter feeling towards Americans. He even said that it was truly regrettable that some activists used the death of the girls&#8221; to further their anti-American movement.

&#8220;My visit also made me realize again that for the Korean people, the threat from the north is imminent and prevalent, and co-existence with the U.S. military, therefore, is indispensable for the country,&#8221; he said.

Okinawa officials who have been trying, without much luck, to convince the national government to revise the SOFA welcomed Shimoji&#8217;s idea.

&#8220;It will greatly support our extended efforts to revise the SOFA,&#8221; said Choki Kuba, director of the Okinawa governor&#8217;s office. &#8220;There is no doubt that the SOFA needs a drastic review.

&#8220;Working together with the Korean people would be very helpful to widen the awareness throughout Japan to build a strong public consensus,&#8221; he said.