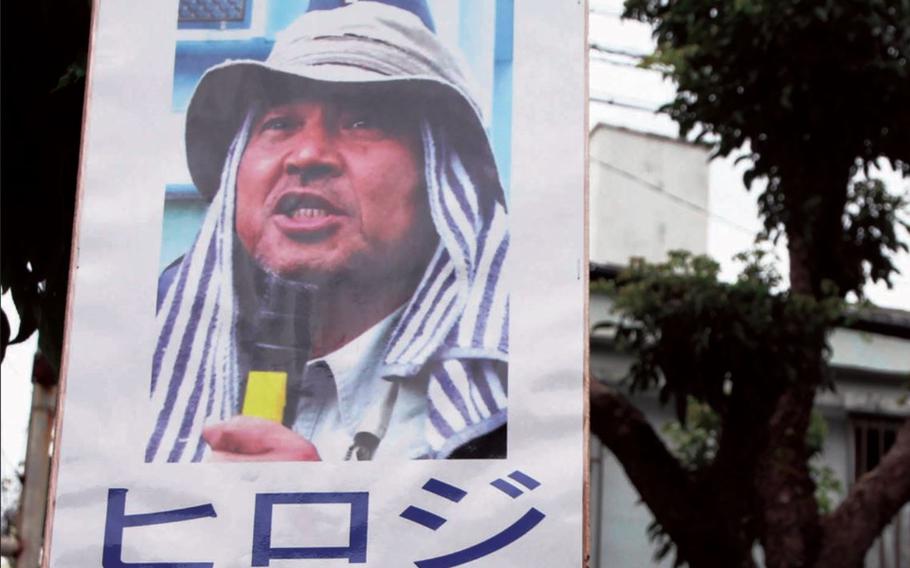 Hiroji Yamashiro, 66, chairman of the Okinawa Peace Activity Center, was convicted in March of a string of offenses that included cutting barbed wire on a fence surrounding a U.S. military installation. (Matt Burke/Stars and Stripes)

CAMP FOSTER, Okinawa — A Japanese high court has upheld a guilty verdict for an Okinawan protest leader convicted of anti-U.S. base activities on the southern island prefecture.

Hiroji Yamashiro, 66, chairman of the Okinawa Peace Activity Center, was convicted in March of a string of offenses that included cutting barbed wire on a fence surrounding a U.S. military installation. He has stood in fervent opposition to relocating Marine Corps Air Station Futenma operations to rural Camp Schwab and has become the de facto leader of Okinawa’s protest movement.

Yamashiro was sentenced to two years in prison with hard labor after trial in Naha District Court; however, that sentence was suspended for three years. An appeal was denied Thursday by Fukuoka High Court head judge Masamichi Ohkubo.

“The government kept ignoring the Okinawa people’s feelings and continuously disregarding Okinawa people and this should not happen in a democracy,” Yamashiro said after Thursday’s verdict, according to Okinawa Peace Activity Center spokesman Takashi Kishimoto.

Work landfilling a portion of Oura Bay at Schwab in Henoko continued Friday for a runway decades in the making. Its completion will facilitate the closure and relocation of Futenma’s air assets.

Yamashiro was detained in October 2016 after police said he cut a strand of barbed wire on a perimeter fence at Okinawa’s Northern Training Area while protesting the construction of helicopter landing pads. Three days later, police added additional charges — such as obstructing businesses and law enforcement — for incidents that happened months before.

His incarceration led to protests and his Okinawa Peace Activity Center collected more than 316,000 signatures demanding the court drop the charges.

He was released on $64,000 bail in March 2017 after the condemnation of human-rights groups such as Amnesty International and the U.S. anti-war group Veterans for Peace.

Yamashiro then spoke at the United Nations, toured Japan and continued his protest efforts.

In March, he pleaded not guilty to the charges except cutting the barbed wire. His lawyers argued that the lengthy sentence sought by prosecutors was unjust for what they called “minor offenses” and they argued it was a violation of Yamshiro’s right to freedom of expression.

“Freedom of speech is protected by the constitution, and by expressing our thoughts against the new base construction, we sat down by the gate,” Kishimoto said. “We don’t understand why this is a violation of obstructing business by force. This is such an unjust verdict.”

It remains to be seen what effect the verdict will have on Yamashiro’s protest activities. If he is arrested again, he could be forced to serve out his sentence.

Yamashiro and his supporters will meet with his lawyers next week to discuss appealing to the Japanese Supreme Court before the deadline in two weeks, Kishimoto said.