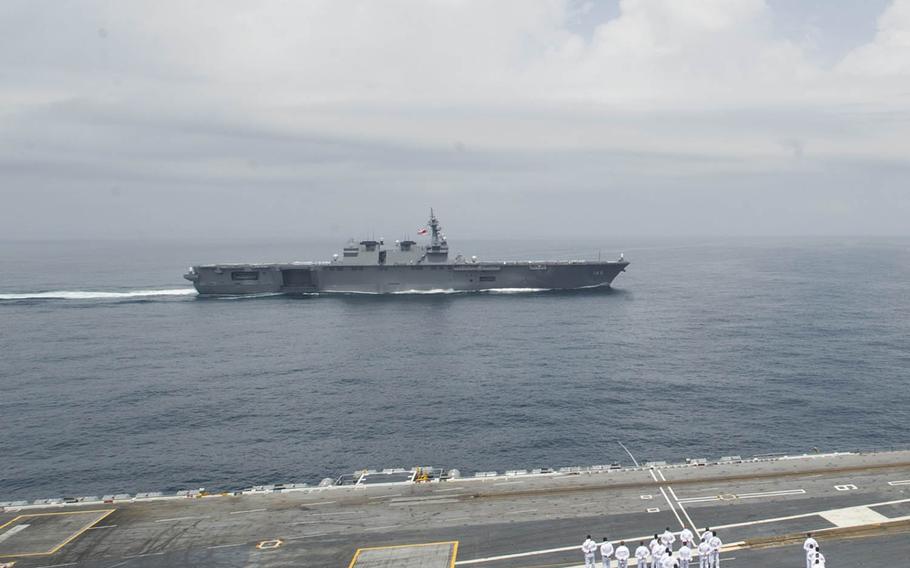 The ships will then head to the coast of Shikoku, one of Japan’s four major southern islands, where the Byrd will resupply an unnamed Navy warship helping defend against North Korean missiles, according to Asahi and Mainichi newspaper reports citing unnamed Japanese government sources.

7th Fleet officials confirmed the Izumo and Byrd are traveling together but would not confirm mission details.

“The U.S. Navy and JMSDF routinely operate together to include coordination or logistical operations at sea,” said Lt. Paul Newell, 7th Fleet spokesman.

Although not officially an aircraft carrier, which are banned under Japan’s constitution, the Izumo can launch helicopters and accommodate V-22 Osprey tilt-rotor aircraft.

JMSDF declined to comment on the Izumo deployment, which marks the first time a Japanese warship has protected an allied vessel since new legislation was enacted to increase Japan’s role in global security.

Before the 2015 legislation, Japanese warships were allowed to use force only when directly under fire and weren’t able to come to the aid of U.S. vessels under attack.

The allies, who are concerned about North Korean missiles, both have warships equipped with the Aegis Ballistic Missile Defense System, which is designed to intercept enemy ballistic missiles.

The Mainichi also reported that a small group of protestors staged a demonstration outside Yokosuka Naval Base after the Izumo’s departure, denouncing the deployment of the ship as a violation of Japan’s defense-only policy.