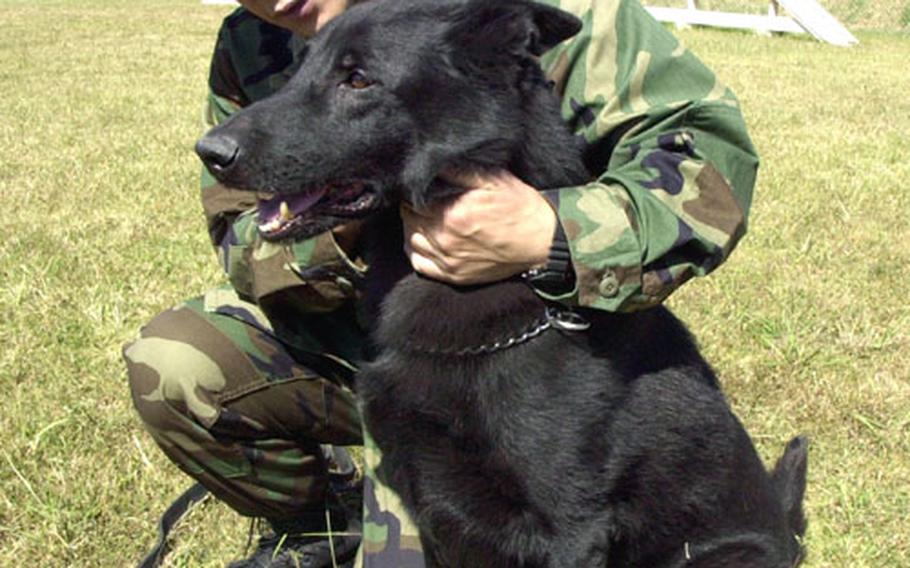 SASEBO NAVAL BASE, Japan &#8212; After years of unflinching service as a trained Navy working dog, Nero finally got to go home.

The 11-year-old German shepherd with the shiny jet-black coat and floppy-tongued smile sat blissfully next to his longtime handler, Sentaro Koda, on Friday afternoon at the K-9 detachment facility at Sasebo&#8217;s Maebata Ammunition Depot.

The adoption marks the first time a military working dog in Sasebo has been adopted by a local Japanese resident, Rodriguez said. Most are sent back to the United States, where they are adopted or, in some cases, euthanized.

Historically, animals working for the military have met less-than-glamorous ends upon retirement, according to articles linked to the Department of Defense Military Working Dog Center&#8217;s Internet site.

At the end of the American cavalry era, the Army disposed of its horses by machine-gunning them. As late as the Vietnam War, dogs were exterminated much the same way, according to the Web sites. In later years, trained dogs were simply &#8220;put down&#8221; via lethal injection.

But public protest prompted Congress to change the law to allow adoption of such animals. President Bill Clinton signed a bill in 2000 to facilitate adoptions by law enforcement agencies, the dogs&#8217; former handlers and other people capable of caring for them.

The DOD Military Working Dog Center at Lackland Air Force Base in San Antonio maintains a registry of retiring dogs up for adoption, as well as the guidelines for adopting one of the canines, at dodmwd.lackland.af.mil