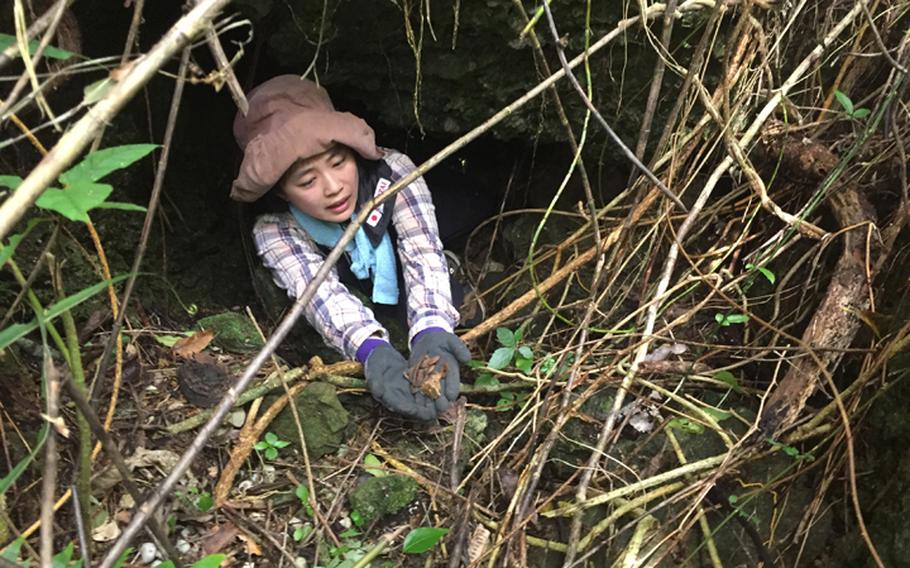 Buy Photo
Kuentai-USA secretary general Yukari Akatsuka emerges from a cave in the Okinawan jungle May 9, 2018 carrying unknown human remains and artifacts left over from the Battle of Okinawa. (Matthew M. Burke/Stars and Stripes)

Buy Photo
Kuentai-USA secretary general Yukari Akatsuka emerges from a cave in the Okinawan jungle May 9, 2018 carrying unknown human remains and artifacts left over from the Battle of Okinawa. (Matthew M. Burke/Stars and Stripes) 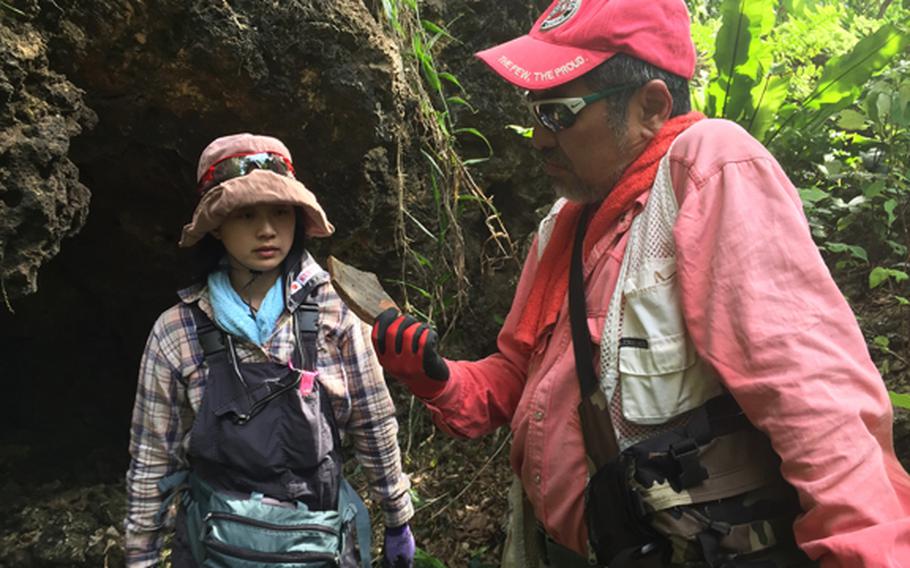 Buy Photo
Kuentai-USA secretary general Yukari Akatsuka, left, and founder Usan Kurata, study pottery fragments found in former Japanese fighting positions during the Battle of Okinawa in the Okinawan jungle May 9, 2018, while looking for the remains of a missing U.S. Marine. (Matthew M. Burke/Stars and Stripes) 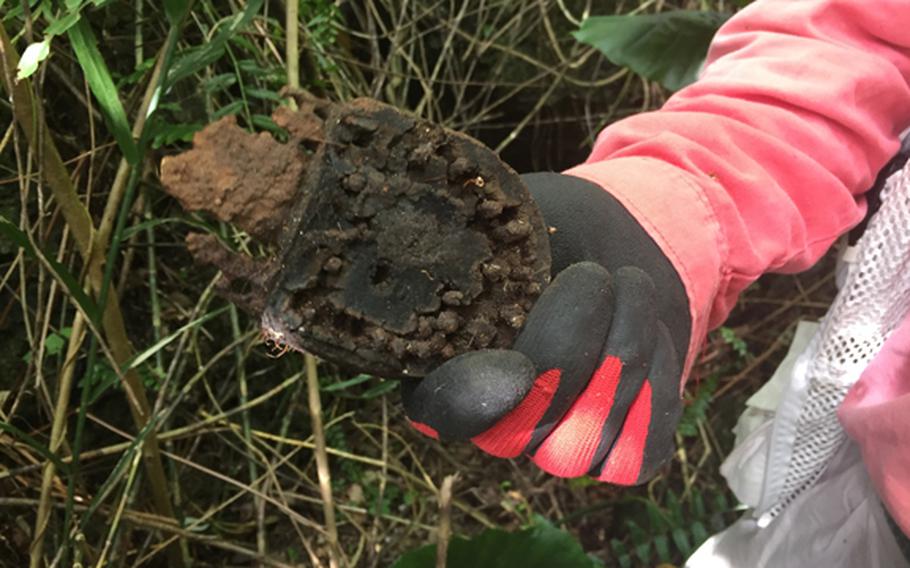 Buy Photo
Kuentai founder Usan Kurata, a Shinto priest, studies the sole of a boot found with unknown human remains in a former Japanese fighting position from the Battle of Okinawa, while searching for a Marine's remains in the Okinawan jungle on May 9, 2018. (Matthew M Burke/Stars and Stripes) 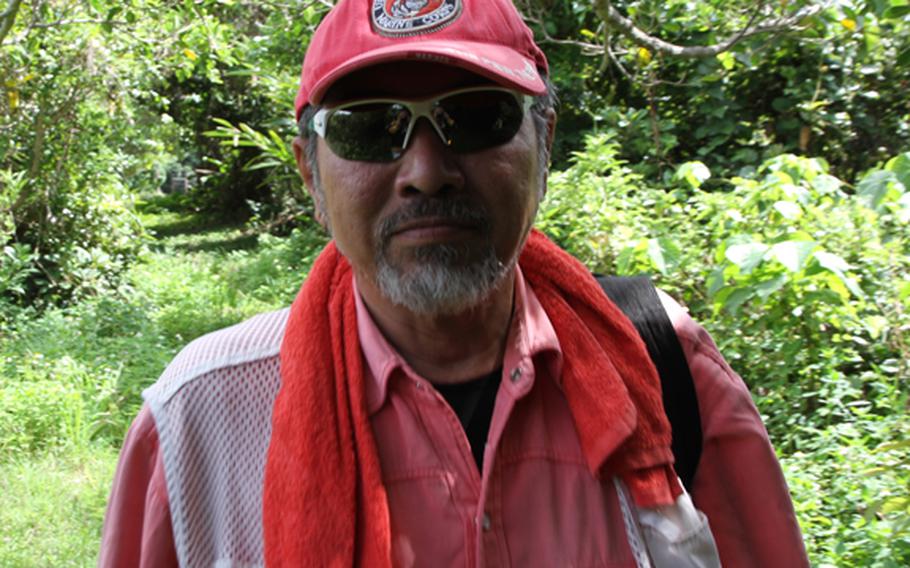 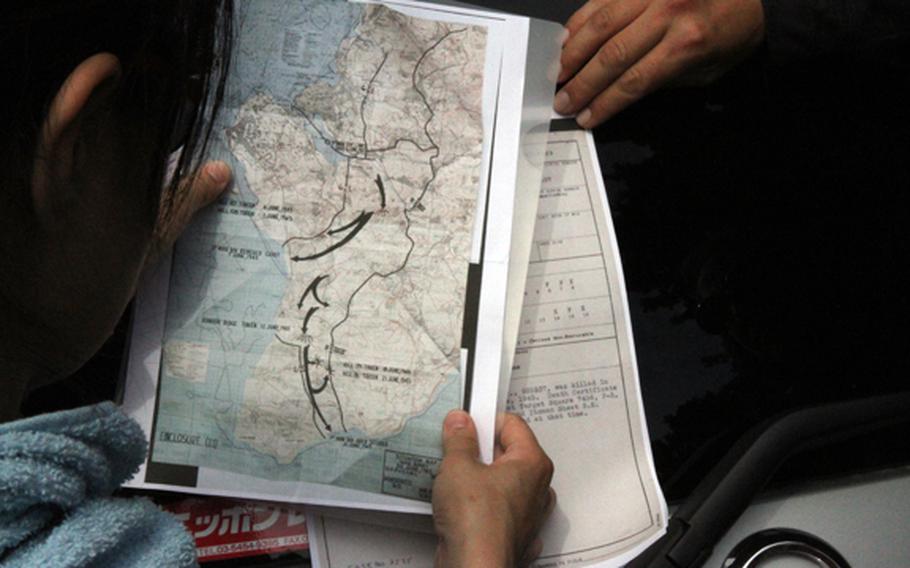 Buy Photo
Kuentai-USA secretary general Yukari Akatsuka studies U.S. military maps and personnel files on missing servicemembers from World War II before taking to the Okinawa jungle May 9, 2018, in an attempt to find a missing U.S. Marine lost during the Battle of Okinawa. (Matthew M. Burke/Stars and Stripes) 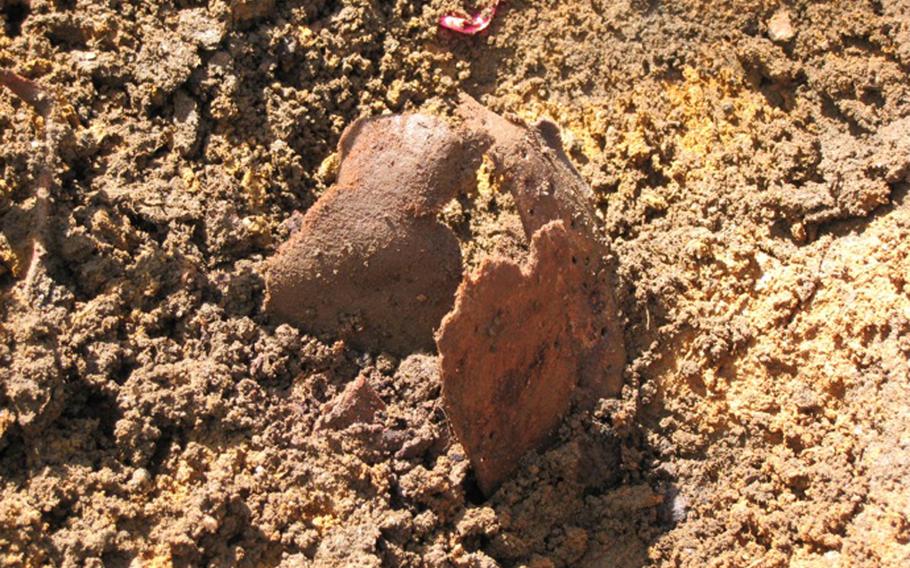 Kuentai-USA unearthed what they believe to be an American boot with human remains inside on the western Pacific island of Saipan in November 2015. (Courtesy of Kuentai-USA ) 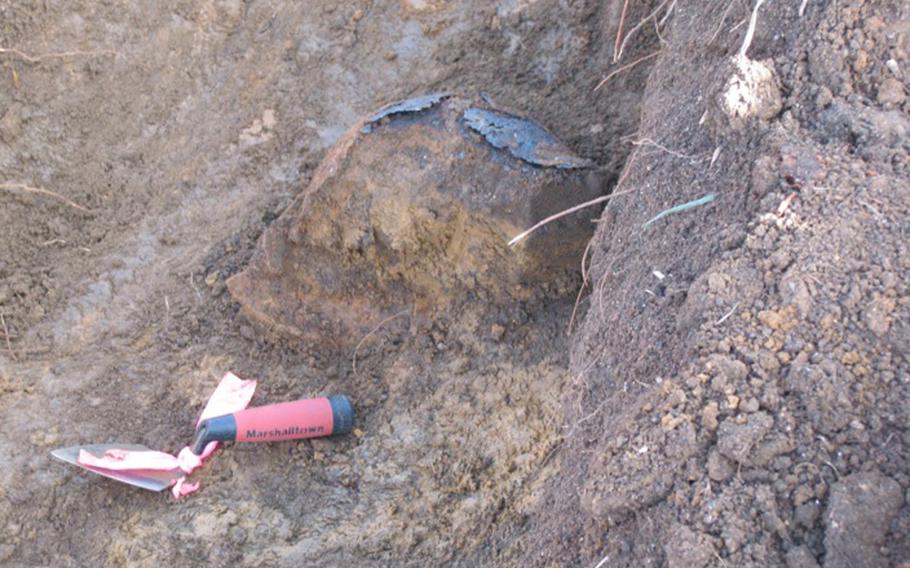 Kuentai-USA unearthed what they believe to be an American helmet with human remains on the western Pacific island of Saipan in November 2015. (Courtesy of Kuentai-USA) 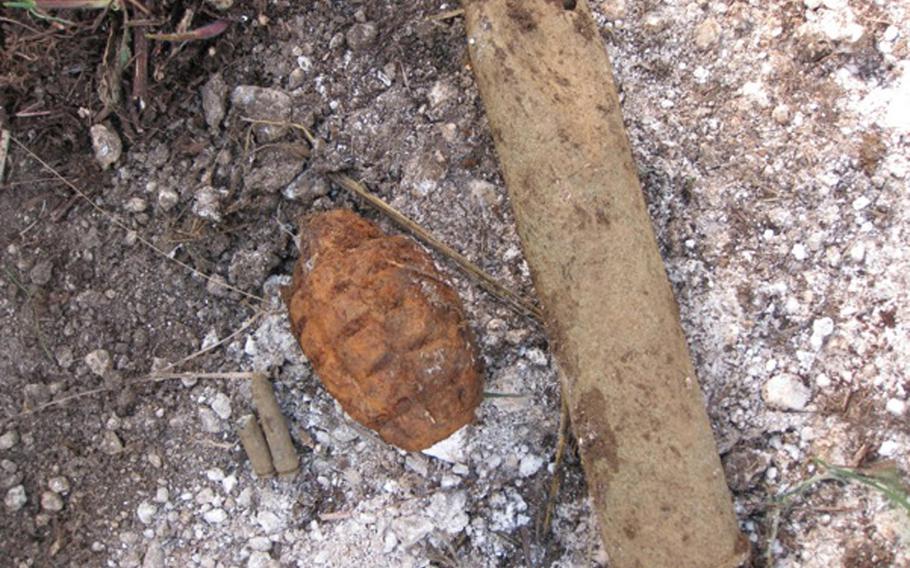 At the site where several sets of human remains were found on the western Pacific island of Saipan in November 2015, Kuentai-USA also unearthed unspent American ammunition and pineapple grenades. (Courtesy of Kuentai-USA ) 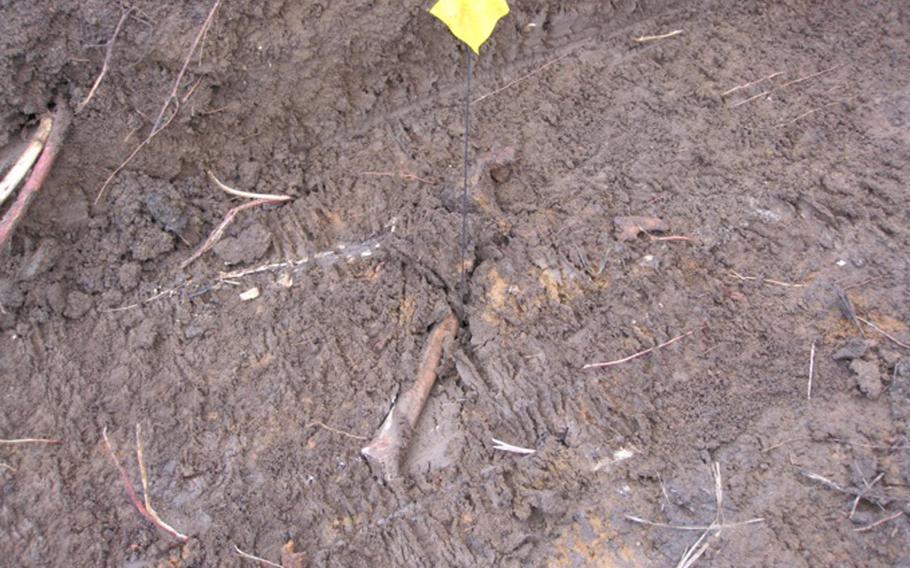 Kuentai-USA unearthed what they believe to be the remains of an American servicemember from World War II on the western Pacific island of Saipan in November 2015. (Courtesy of Kuentai-USA ) 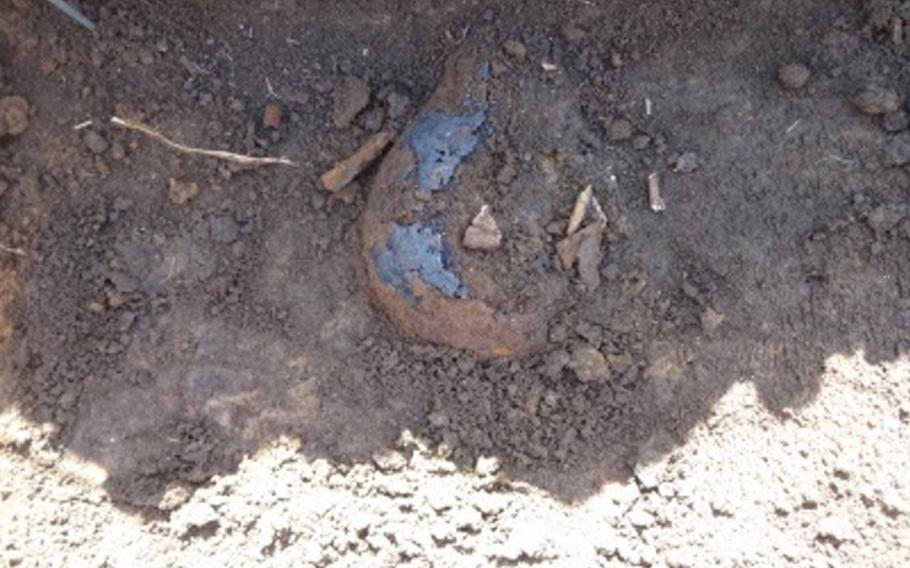 Kuentai-USA unearthed what they believe to be the remains of an American servicemember from World War II on the western Pacific island of Saipan in November 2015. (Courtesy of Kuentai-USA) 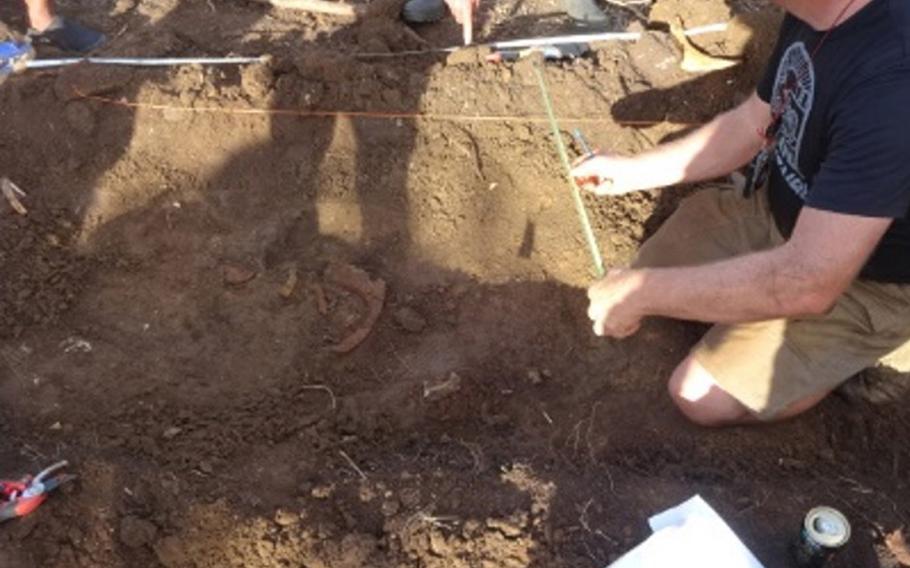 Kuentai-USA unearthed what they believe to be an American helmet with human remains on the western Pacific island of Saipan in November 2015. (Courtesy of Kuentai-USA)

Kuentai-USA of Potomac, Md., uncovered what it believes to be the remains of two or three American servicemembers in November 2015 in an area known as the July 7, 1944, position of the 27th Infantry Division, 105th Infantry Regiment, when it was devastated by a surprise Japanese banzai attack.

The attack killed and injured more than 900 U.S. servicemembers, according to the Defense POW/MIA Accounting Agency website. More than a dozen American soldiers remain missing in the vicinity of Kuentai-USA’s excavation, its officials said, citing U.S. government records.

Kuentai has reported the discovery to DPAA lab director John Byrd several times since 2015, officials said, with no response. DPAA officials have been to the island since the remains were found, but no efforts to investigate the discovery have been made and the bones remain in the ground.

Kuentai has also accused DPAA of providing inaccurate figures on the number of missing Americans on the island; taking more than five years to identify a set of remains when there is a presumptive ID; removing human remains that Kuentai recovered from Saipan without telling the group; and pressuring Saipan’s local officials to bar Kuentai from excavations.

“I don’t think they’re serious about repatriating remains,” said Kuentai founder Usan Kurata. “We do not want to leave them behind. We do not want to forget about them. If their remains are there, we should go out and search for them, no matter if they are Japanese or American.”

The Saipan Division of Historic Preservation “did not believe the remains found in 2015 and left in the site were American and neither did DPAA,” Air Force Lt. Col. Kenneth Hoffman, the agency’s spokesman, wrote in a statement to Stars and Stripes.

Kurata said neither agency inspected the remains, nor had they looked at Kuentai’s photographs of them until Stars and Stripes shared the photos while reporting this story. After seeing the photographs April 18, DPAA said its stance on the remains is unchanged.

Remains recoveredKurata and his two nonprofits, Kuentai-USA and Kuentai-NPO, which specializes in the search for Japanese remains and is based out of Kyoto, are responsible for the recovery of about 20,000 sets of Japanese remains and at least seven sets of American remains over the past 12 years. Four of those, which are from Saipan, have been positively identified by DPAA or its predecessor agency.

Kuentai, which has been recovering human remains on Saipan since 2011, says there are 505 missing Americans there, citing U.S. government records, with 367 missing on land.

Hoffman disagreed, saying “approximately 280” are missing on the island.

In October 2015, Kuentai began what would be its last expedition to the island. On Oct. 31, the remains of a U.S. Marine were discovered and handed over to Saipan’s Division of Historic Preservation.

As Kuentai prepared to leave the island Nov. 5, the last full day of work, it uncovered what appeared to be an American military helmet. Scraping away the densely packed clay of Lot 014B02 in Achugao, workers uncovered some bones. The discovery was made in the vicinity of the 105th’s night perimeter when it was hit from behind by the banzai attack, about 80 feet from the site where Kuentai found a set of American remains in 2013.

“The shape of the metal looks like the American helmet,” the group wrote in a blog post on its website at the time. “We have to wait for the analysis by the osteologists, but the possibility of American soldier cannot be denied.”

Expanding the trench, they found another helmet that appeared to be American, more bones and American artifacts, including an unspent American hand grenade and unfired ammunition.

The next day, they dug a parallel trench using a backhoe, where they found more bones, including a leg bone in what appeared to be an American boot.

Japanese foot soldiers did not wear boots, Kurata said — only officers did — so based on probability, it is far more likely to be American. He also said that the majority of the Japanese remains recovered have been in mass graves, while the Americans have been found buried individually. No Japanese artifacts were found in the trenches.

But Kuentai ran out of time and funds for the project.

It photographed the remains, covered and reburied them, and marked the site. In its reports, which were filed with the preservation division, the group recorded the discovery scientifically, but did not include its opinion that they were American. That was reported to Byrd, whom the group emailed several times over the next year, according to copies of the emails provided to Stars and Stripes.

Hearing nothing from DPAA, Kuentai began to plan to go back for the remains the following year.

In the meantime, the preservation division reported that the remains of the Marine handed over by Kuentai in 2015 were missing from its office.

In June 2016, Kuentai received an update to its permit requirements. It was told that to ensure “national and international interests” and “in light of recent problems with misidentification, misplacement, mislabeling, and sorting problems,” the Division of Historic Preservation was requiring the group to be under contract or partnership with DPAA before any more recoveries could be made on the island.

DPAA said it was unprepared at that time to pursue public-private partnerships “in a robust manner,” but vowed to get back to Kuentai within a few days. Months passed, so Kuentai officials reached back out to their contacts in DPAA’s office of strategic partnerships. They said they never received a reply.

Lost foreverThe Marine’s remains were found in the division’s offices in August 2016. DPAA picked them up from the island but never informed Kuentai. It would be inappropriate for DPAA to inform “any non-U.S. government or unassociated private foreign organization about DPAA operations or official business,” Hoffman said.

Yukari Akatsuka, Kuentai’s secretary general, believes that DPAA is controlling Saipan’s Division of Historic Preservation. “There must be some politics or agreement between them,” she said.

DPAA officials did not respond to questions about whether they had any input on the division’s new requirements for Kuentai, instead referring Stars and Stripes to the Division of Historic Preservation.

The division’s longtime head, Mertie Kani, was not available for comment. She was terminated June 2, said Robert Hunter, head of the preservation division’s supervisory agency, the Department of Community and Cultural Affairs in Saipan.

Hunter declined to provide details about what Kani’s termination, but said “generally, there were conflicts with [Division of Historic Preservation] personnel and grant-related issues that were the primary cause for this action.” She headed the division for more than 25 years.

Hoffman said DPAA can’t simply go to the island and dig up the area.

Akatsuka and Kurata said they have reached the peak of their frustration with DPAA, which they say won’t go to Saipan and get the remains and won’t let Kuentai do it either.

“The bones become very breakable once they are exposed to the air because they have sat in the soil for a long time,” Akatsuka said. “The remains will be lost forever if we don’t recover them.”