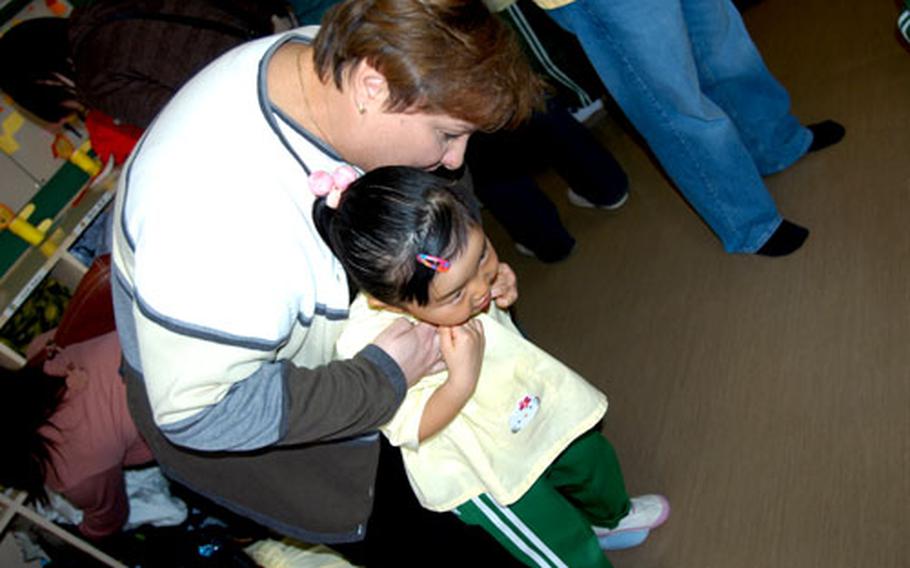 Japanese day care, or hoikuen, is divided into approved and unapproved centers; the primary difference is the level of government regulation. Approved facilities are sanctioned by local governments, can be public or private and typically are reserved for working parents, guardians or those who cannot look after their children for other reasons, such as an illness.

Approved centers in Japan and Okinawa must meet Ministry of Health, Labour and Welfare standards based on Japan&#8217;s Child Welfare Law. The regulations generally pertain to building size, space for play and crawling, kitchen areas, safety features, and training and number of teachers, according to a report on Japanese day care by Child Research Net. Approved centers undergo annual inspections.

Provider-to-child ratios at approved day-care centers are similar to Defense Department CDC requirements for infants and young children but diverge significantly for preschoolers.

In Misawa, for example, children whose parents are both SOFA members and do not pay taxes in Japan cannot receive care at approved centers, said a Misawa city official. &#8220;If one of the parents is Japanese or one works for a Japanese company and pays Japanese taxes, then they are eligible,&#8221; the official said.

But at day-care centers around Yokosuka Naval Base, about 50 children with either one or both parents who work at the Navy base near Tokyo attend off-base day-care centers, said Kenzo Honma of Yokosuka City Hall&#8217;s child support division.

Children of SOFA personnel are accepted just like any other Japanese applicant, he said.

If more applications are received than spaces available, government officials will interview parents to evaluate their need for day care, officials said.

Currently there are more than 20,000 children on day-care waiting lists throughout Japan, officials said.

Unlike in the States, mainland Japanese and Okinawan kindergarten, or yochien, is for children ages 3 to 5 and usually is no more than four hours a day. Kindergarten in Japan is &#8220;intended to (take) care (of) young children, to provide appropriate surroundings and encourage growth of their mind and body,&#8221; according to School Education Law, which lays down basics of Japan&#8217;s schooling system.

&#8220;It is the first group living for the children,&#8221; said Naoko Kadono, an official at the kindergarten management assistance division at the Ministry of Education, Culture, Sports, Science and Technology.

The average tuition for Japanese public kindergarten is about $700 per year; for private kindergarten, $2,400 per year. Many kindergartens offer before- and after-school child care.

Most day-care centers and kindergartens in Japan serve a hot lunch of fish, rice, vegetables and miso soup, though at some, parents may chose to provide their own.

Kindergarten officials advise parents to make an appointment to tour the kindergarten before applying. Some kindergartens accept applications throughout the year, others only once a year.