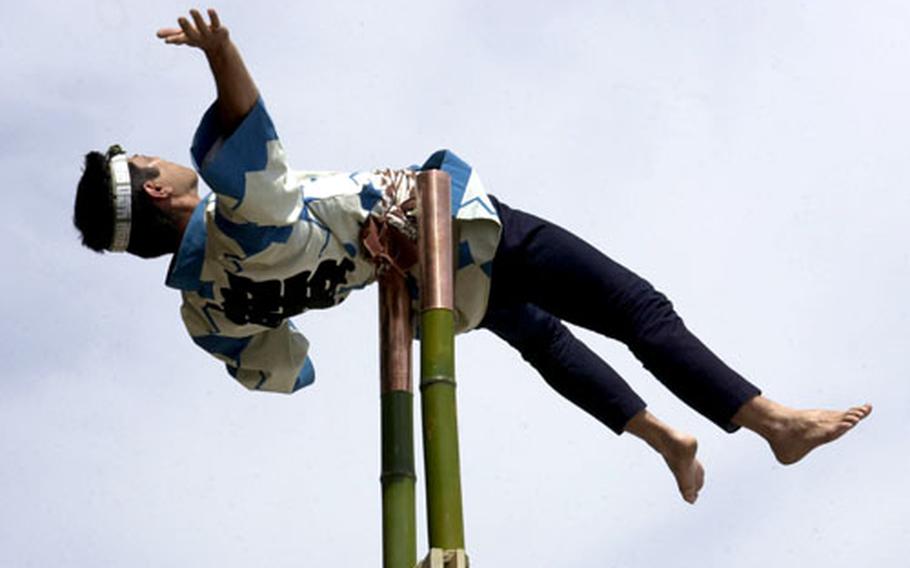 YOKOTA AIR BASE, Japan &#8212; Officials here are staging their 3rd annual Japanese Culture Day on Friday in Hangar 15 near the Yokota flight line.

Planners predicted a big turnout; about 4,000 base residents took part in last year&#8217;s event. Martial-arts demonstrations, classic Japanese dances and musical performances are among host-nation traditions to be showcased from 10 a.m. to 4:30 p.m.

Mayors from the six cities surrounding Yokota will be among VIPs to attend.

A huge attraction, in more ways than one, is to unfold on the outside stage at 2 p.m. when Yokota&#8217;s chief master sergeants square off against the base&#8217;s colonels in a &#8220;Chiefs vs. Eagles&#8221; sumo match. Each competitor will be fitted in a special suit designed to enhance girth.

Vendors in concession stands will sell food, gifts and other paraphernalia. Culture Day visitors also may take part in a kimono show.

All necessary security precautions have been taken for performers and vendors, he said; parking arrangements and bus transportation also are in place.

In case of bad weather, martial-arts demonstrations will be inside Hangar 15.

&#8220;This gives us as Americans the chance to make new friends and see the love (Japanese) have for their culture,&#8221; said lead project officer Maj. Ricardo Young, 374th Mission Support Squadron operations director. &#8220;I learn something every time I get to do something like this. You can see the love Japanese people have for others.

&#8220;Some Americans can learn patience, benevolence and things about just giving. When Americans give, they often expect something in return. I&#8217;ve never been able to out-give a Japanese friend. They&#8217;re really big on hospitality.&#8221;

Col. Ken Wavering, the former vice commander of the 374th Airlift Wing, launched Japanese Culture Day at Yokota in 2003. He took a cue from Yokota West Elementary School, which celebrates a Japanese festival, or Nihon Matsuri, each year.

In exchange for the free entertainment offered by the off-base friendship clubs, Yokota officials are throwing an American-style barbecue for the performers.

DISPLAY AND OTHER OUTSIDE EVENTS

UNIFORM OF THE DAY

Civilian attire for culture day visitors; battle-dress uniform for servicemembers who opt to remain at work.

HOW TO GET THERE

The event takes place in Hangar 15 near the Yokota flightline. Parking is extremely limited, so organizers recommend using the Kanto Express, which will run every 15 minutes along modified routes from 7 a.m. to 5:30 p.m.

Pickup points include the west housing parking lot next to Building 1296, the parking lot near the 730th Air Mobility Squadron&#8217;s maintenance facility, the Yokota Community Center&#8217;s Kanto Express bus stop and base theater parking lot on the east side. The base shuttle will resume normal operations at 6 p.m.