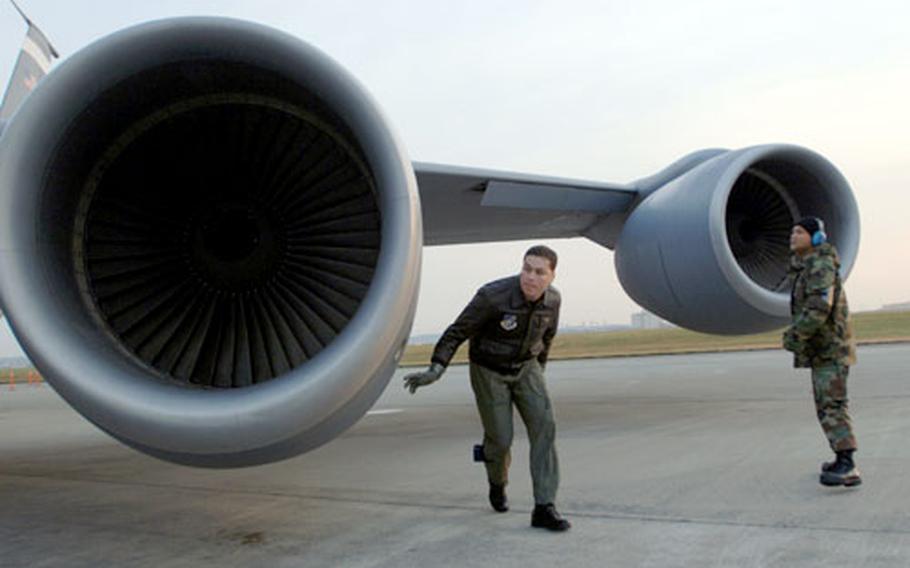 TOKYO &#8212; The Tokyo High Court on Wednesday rejected demands by Japanese residents in the Yokota Air Base area to extend no-flight hours at the base. But the high court granted more compensation than a lower court had to residents who have complained about noise.

&#8220;I felt regret,&#8221; said one plaintiff, Yoshiro Yamaguchi of Mizuho town, after the judge read the rulings in court. &#8220;We have been fighting to get quiet nights back.&#8221; But he said he saw some progress since the first ruling on the case, in 2002 by Tokyo District Court in Hachioji.

The High Court on Wednesday awarded a total of approximately 3.25 billion yen (about $27.2 million) to the residents for their past suffering, 850 million yen (about $7.1 million) more than in the previous ruling. The amount is the highest awarded in lawsuits involving U.S. military bases.

The Tokyo High Court threw out the 2002 ruling, which recognized the Japanese government&#8217;s claim that some residents moved to the area knowing about the noise. Wednesday&#8217;s ruling also allowed the residents to receive compensation for suffering through Wednesday, instead of cutting it off after the final High Court hearing almost a year ago, as the lower court ruling had mandated.

Minoru Dobashi, the plaintiffs&#8217; attorney and spokesman, praised the decision to extend the compensation, saying it recognized the residents&#8217; continued suffering.

Approximately 6,000 residents filed various lawsuits against the Japanese government from 1996-98 demanding flight suspension at Yokota from 9 p.m. to 7 a.m. rather than the 10 p.m. to 6 a.m. window agreed to by the U.S. and Japanese governments. They also demanded compensation for suffering caused by aircraft noise in the past and for the future.

Dobashi also said he was pleased the ruling pointed out that the Japanese government failed to take action after the Supreme Court, hearing a different case, suggested noise at Yokota was above the tolerable limit.

&#8220;That no system has been established (since) to compensate for noise damages and that there are plaintiffs who are forced to file lawsuits repeatedly to seek relief is abnormal,&#8221; the ruling read. &#8220;The legislative body deserves censure for negligence.&#8221;

However, Dobashi was disappointed that the court adopted the Japanese government&#8217;s new boundary for the area considered affected by noise, which is smaller than previous boundaries. Dobashi claimed that a full survey was not conducted before drawing the newer lines. Approximately 10 percent of plaintiffs were not awarded compensation.

&#8220;I praise that an appropriate decision was made by recognizing the Japanese government&#8217;s claims about a night-flight ban and future compensation,&#8221; Yoshiyuki Jibiki, Defense Facilities Administration Agency general affairs chief, was quoted as saying in a statement released Wednesday.

But he said he regretted that part of the past compensation claim was accepted by the court.

&#8220;Our agency will continue to make every effort, such as improving living environment, in order to gain understanding by residents near Yokota Air Base,&#8221; he said.

Both parties said Wednesday that they have not decided whether to appeal the High Court&#8217;s decision.

Yokota officials referred a request for comment to U.S. Forces Japan. A USFJ spokesman said his office is not in a position to comment on the matter because it involves legal actions against the Japanese government.