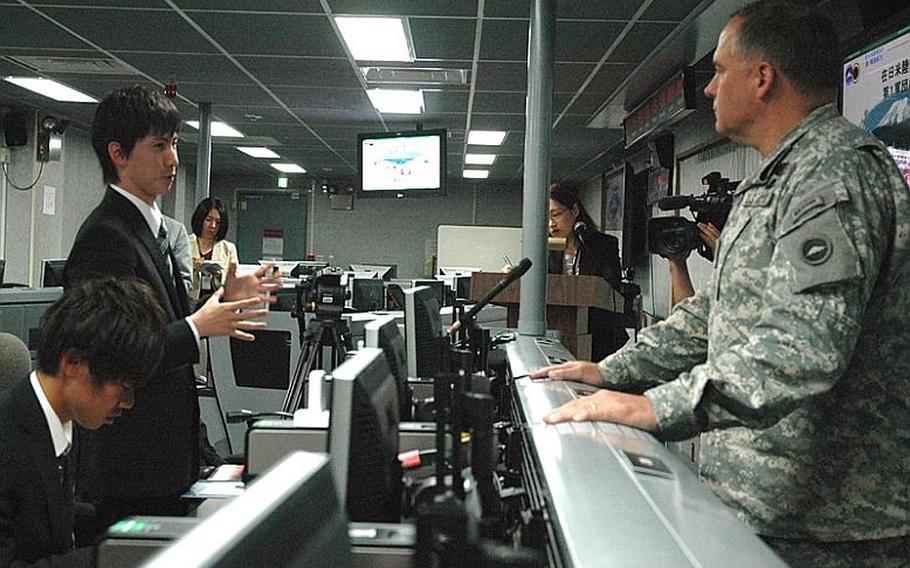 Buy Photo
A Heisei International University student talks Friday with Maj. Gen. Francis Wiercinski, the U.S. Army?s commander in Japan, inside the Army&#39;s command and control room at Camp Zama. The students toured the base Friday as part of their thesis seminar about the U.S.-Japan alliance. (Teri Weaver/Stars and Stripes)

Stories of World War II devastation can seem more like movie scripts than historical accounts, she said. Current security issues &mdash; such as reducing the number of U.S. troops on Okinawa or Japan&rsquo;s role in helping to defeat terrorism elsewhere in the world &mdash; sound too difficult to understand.

But the recent sinking of the South Korean warship Cheonan and South Korea&rsquo;s accusation that North Korea is to blame gave the Heisei International University senior some pause.

&ldquo;I didn&rsquo;t know what the U.S. military is doing here,&rdquo; she said Friday during a tour of Camp Zama, home to the headquarters for U.S. Army Japan and located just outside of Tokyo. &ldquo;I&rsquo;m concerned that if something were to happen, we wouldn&rsquo;t know what to do and we won&rsquo;t be able to respond.&rdquo;

On Friday, Uehara was one of a dozen Heisei students visiting this U.S. Army base as part of their thesis seminar on international relations. This year, they are focusing on the U.S.-Japan alliance, which marked its 50th anniversary in January, according to their professor, Shuichi Wada.

Maj. Gen. Francis Wiercinski, the U.S. Army&rsquo;s commander in Japan, welcomed the students and their interest in learning more about their nation&rsquo;s defense plans.

The students admitted they&rsquo;re at the beginning stages of their thinking about security issues facing Japan. On Friday, they were just as interested in climbing aboard Humvees, watching a Navy Seahawk helicopter practice approaches, and eating in the soldiers&rsquo; mess hall as they discussed their country&rsquo;s role in defending itself.

Most said that before entering the university classroom, they hadn&rsquo;t reflected much on Japan&rsquo;s military, its reliance on the United States, or its role in stabilizing security for its neighbors.

&ldquo;In high school and junior high school, you learn that peace is important,&rdquo; said Hiroyuki Yoshida, 22, a senior. &ldquo;Everyone knows it is important. But they don&rsquo;t teach what to do to keep peace.&rdquo;

Some of the students share the same concerns as do many vocal opponents to U.S. military bases.

Takanori Ono, 21, said the perception that U.S. servicemembers might commit crimes while stationed in mainland Japan and Okinawa leaves some people feeling unsafe.

But Ono supports the U.S.-Japan alliance, though he thinks there&rsquo;s room for changes. He suggested, for example, that harsher penalties for crimes committed by U.S. troops might build confidence among local residents and improve support for the alliance.

Wada, the professor, had asked the Army for permission to visit Zama so the students could appraise some of those perceptions.

&ldquo;Before they build their ideas, they should have a look (at the U.S. military) themselves,&rdquo; he said.

For Masafumi Shibata, 21, it worked. The seminar and the base visits &mdash; the group also has dropped in on nearby Yokota Air Base &mdash; help translate a written alliance into a tangible, real-world relationship.

&ldquo;It will be the foundation for understanding issues such as the current situation involving North Korea,&rdquo; he said.