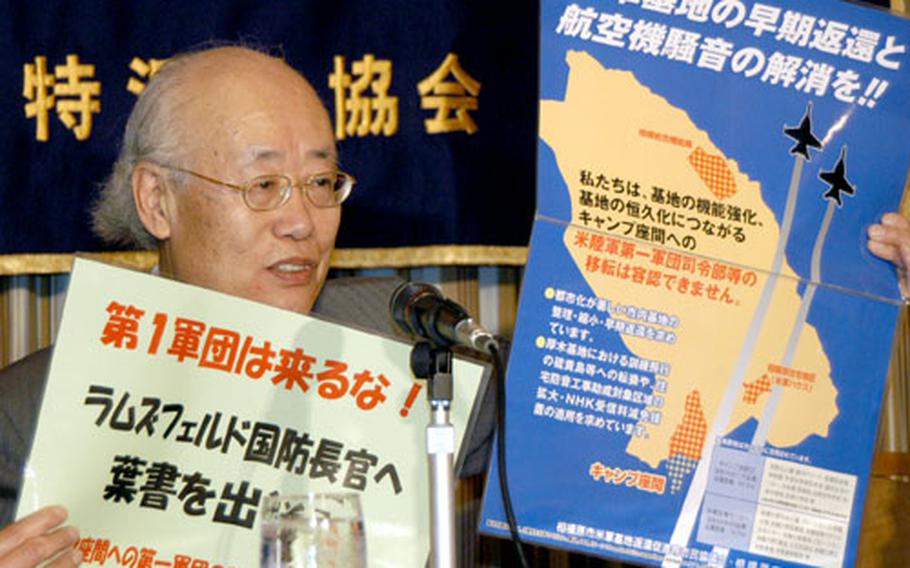 TOKYO &#8212; Five Japanese opponents to U.S. military realignment plans told reporters in Tokyo on Monday they would like to see fewer or even no U.S. troops in Japan and changes to elements of the interim realignment agreement announced in October.

&#8220;The only thing we can concede to is the withdrawal of the U.S. forces off the island of Okinawa,&#8221; said one speaker, Hiroshi Ashtomi, chairman of a citizens&#8217; group there.

Five speakers from communities across Japan visited the Foreign Correspondents Club on Monday, one day after two dozen civic and governmental groups from a new opposition coalition met in Tokyo.

Yokosuka lawyer Masahiko Goto criticized the recent Navy decision &#8212; accepted by the Japanese national government &#8212; to bring a nuclear-powered carrier to Yokosuka Naval Base after the conventionally powered USS Kitty Hawk is decommissioned in 2008. Goto leads a citizens&#8217; group opposed to a nuclear carrier&#8217;s presence.

Jungen Tamura, an Iwakuni city assembly member and head of a citizens&#8217; group that monitors the activities of U.S. bases, criticized the plan to move about 57 carrier aircraft from Naval Air Facility Atsugi to Marine Corps Air Station Iwakuni &#8212; doubling the number of aircraft at the Iwakuni base.

While the city generally supports the U.S. military in the area, he said, he believes a new runway project created by the national government, ostensibly to reduce noise and improve safety, now is being used as a pretense to move the Atsugi aircraft there.

Meanwhile, Seiya Okamoto, vice chairman of an Atsugi citizens&#8217; group, said despite the plan to move noisy aircraft away from the area, residents will continue to protest any exercises or training in the skies above some 1.5 million residents in the area.

Takio Izawa, representing a group near the Army&#8217;s Camp Zama, said a plan to move a new Army operational headquarters &#8212; believed to be I Corps headquarters in Fort Lewis, Wash. &#8212; from the United States to Zama is counter to a 1971 agreement between local officials and the national government to gradually remove troops from the area.

The speakers varied on their degree of opposition to the interim agreement. Japan and the U.S. still are in talks over some issues, including how much Japan will pay to move 8,000 Marines from Okinawa to Guam and mainland Japan.

Ashtomi, representing citizens from Nago on Okinawa, said his group won&#8217;t stop its fight until all U.S. forces on Okinawa are removed.

Ashtomi said he&#8217;s working with environmental groups to fight a proposal to build new offshore runways at Camp Schwab near Nago to accommodate air operations now conducted at MCAS Futenma. He said the plan would destroy the environment for dugongs, a local marine mammal.

Other speakers had more moderate goals than removing all U.S. forces. Goto from Yokosuka said if a nuclear carrier must be moved to the Navy base there, he would like the ship&#8217;s reactor to be open to Japanese inspectors, just as reactors at Japanese power plants are.