Japanese child of war speaks of sacrifices to today's youth 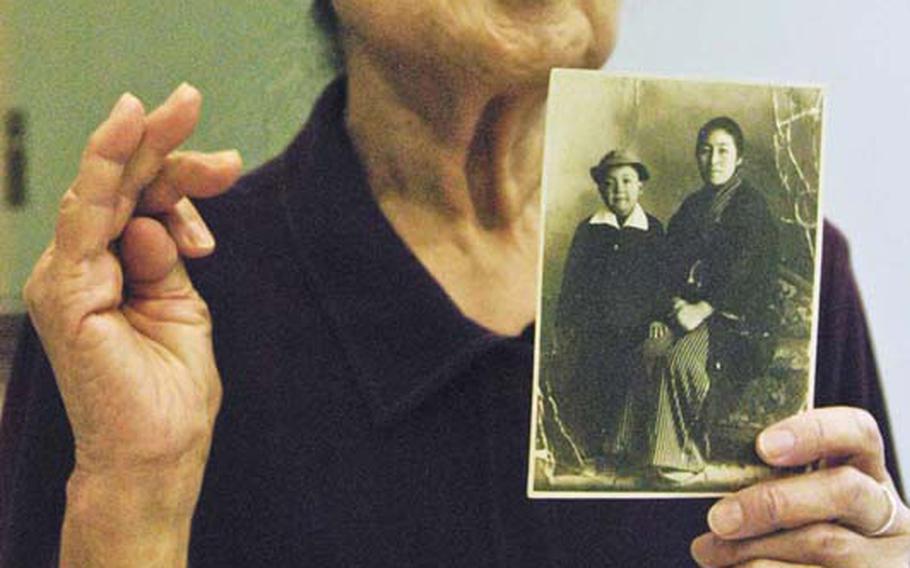 Buy Photo
Osaka resident Takao Iga, 79, displays a photo of her mother and her younger brother who were killed during one of several Allied firebombings of Osaka in 1945, while talking a group of American ex-POWs at Osaka International Peace Center on Oct. 18, 2012. Iga and the men recounted similar stories of the destruction that engulfed Osaka during the last few months of the war. (Charlie Reed/Stars and Stripes)

OSAKA, Japan &mdash; As a young girl, Takao Iga watched as American prisoners of war were forced to work in southern Osaka just after the war in the Pacific began in 1941.

&ldquo;I knew that Japan was fighting a war, but as I watched them, I wondered why the Americans were working for Japanese,&rdquo; she said during a meeting Thursday with American former POWs visiting Japan.

The POWs always seemed to be working as Iga passed by before and after school. The fourth-grader would stop at the wired fence that separated them.

&ldquo;I watched them, feeling sorry since they couldn&rsquo;t see their fathers, mothers and wives,&rdquo; she said.

She soon learned firsthand the pain that war brings, even to the bystanders.

When Osaka was firebombed for the first time on March 13, 1945, Iga and her family were among the first casualties.

Iga suffered burns on her face, hands and leg. She still has scars on the latter.

After the war ended, she thought back on her time watching the American prisoners, so far from their homes and families.

&ldquo;I&rsquo;ve always thought we can&rsquo;t fight wars since wars involve sacrifices for both countries that won and lost,&rdquo; she said.

Now, at 79, she continues to pass down that lesson to younger generations by talking to groups about her experiences.

&ldquo;I always close my speech with a message to the children that we can&rsquo;t fight wars since we are all the same human beings even though the colors of our eyes and skins are different,&rdquo; Iga said.