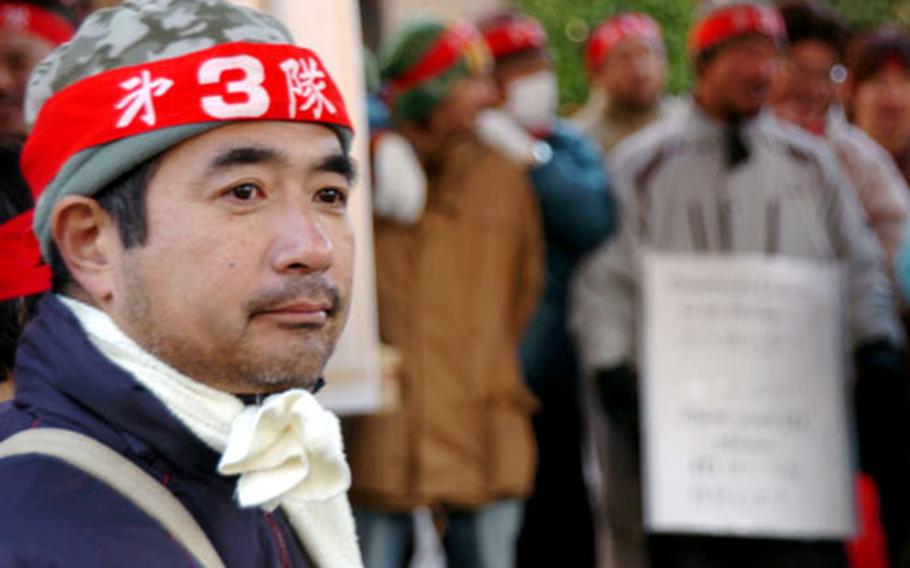 A Japanese national who preferred that his name not be used was one of approximately 450 Zenchuro labor union demonstrators who work at Yokosuka Naval Base to picket in front of the Yokosuka Main Gate on Wednesday. (Christopher B. Stoltz / S&S)

A Japanese national who preferred that his name not be used was one of approximately 450 Zenchuro labor union demonstrators who work at Yokosuka Naval Base to picket in front of the Yokosuka Main Gate on Wednesday. (Christopher B. Stoltz / S&S) 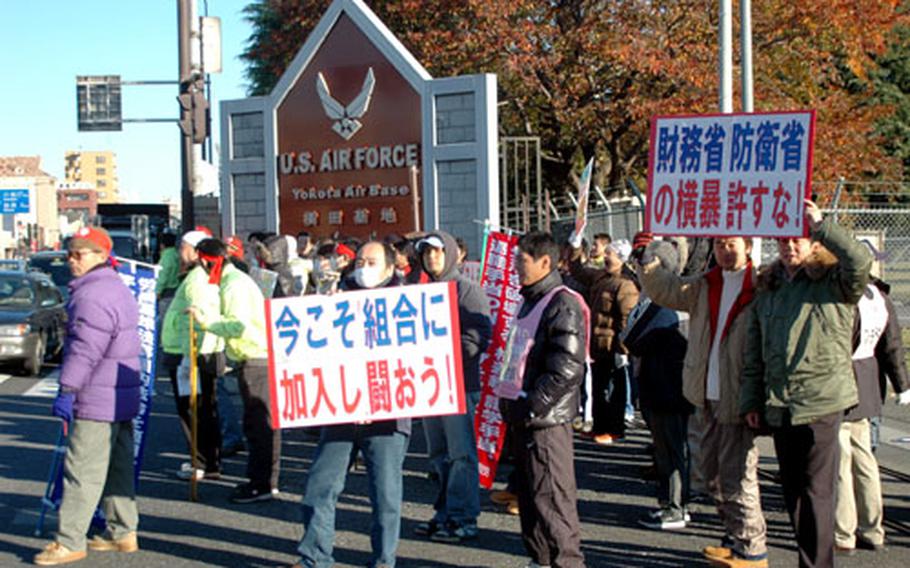 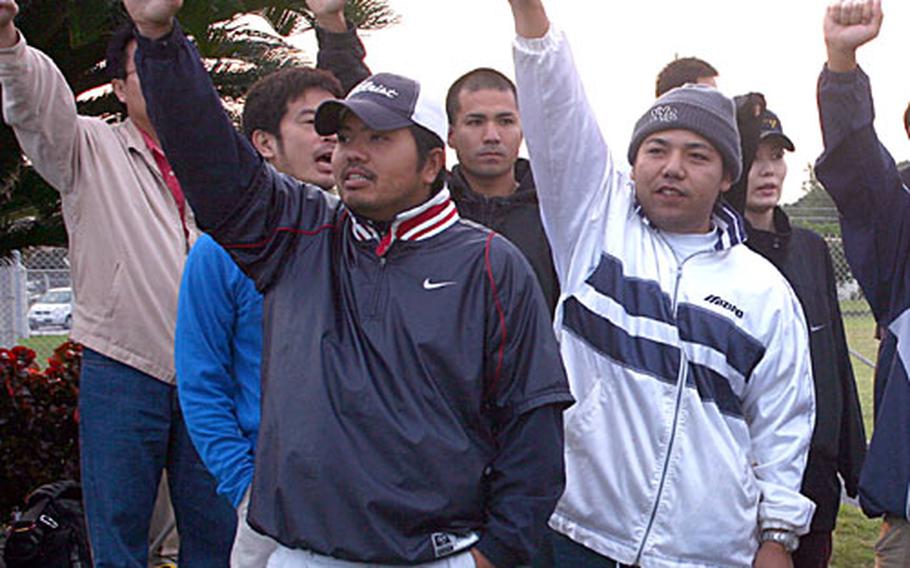 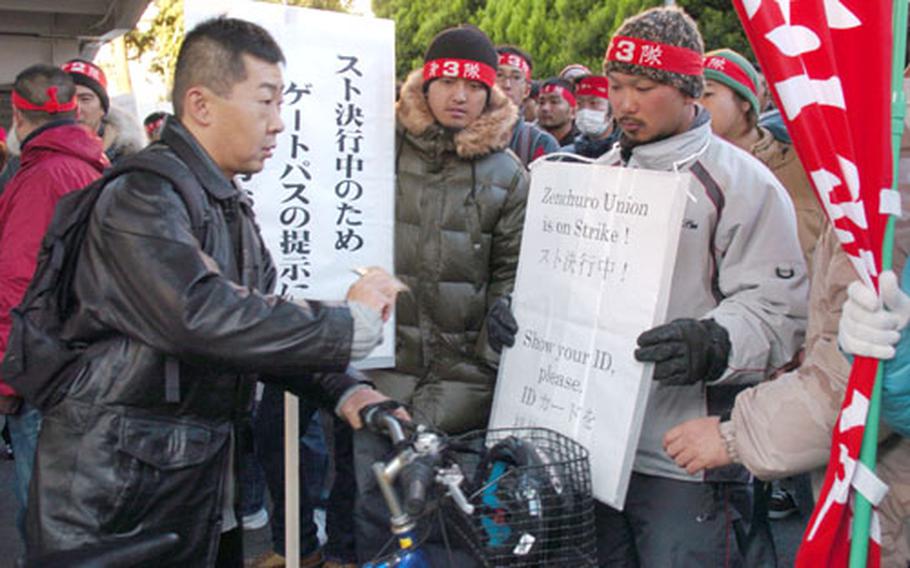 A Japanese base worker shows his identification card to pass through picket lines manned by Zenchuro labor unionists in front of the Yokosuka Naval Base Main Gate. Essential members such as security forces, firemen and hospital workers were allowed on base in spite of the strike. (Christopher B. Stoltz / S&S) 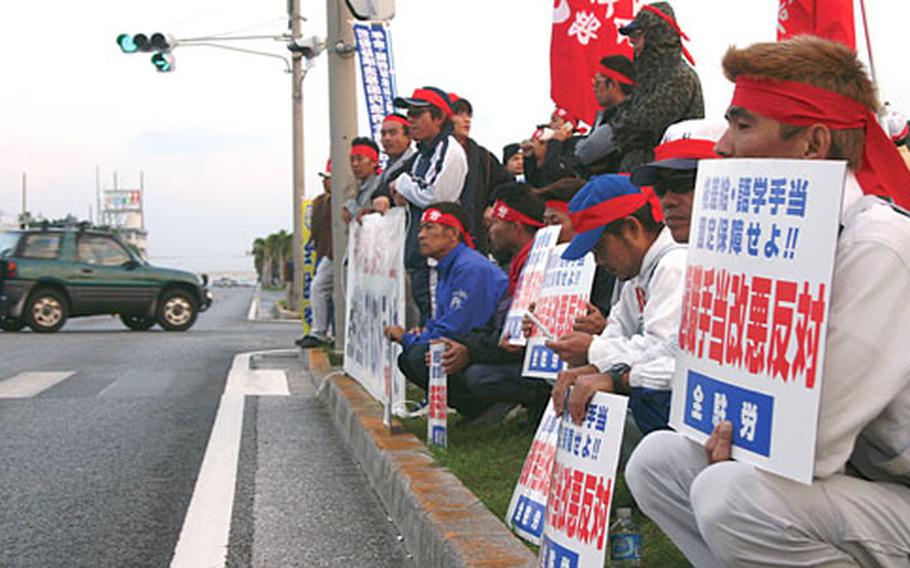 Japanese employees of U.S. military bases line the side of Highway 58 in front of Kadena Air Base&#39;s Gate 1 on Wednesday. The strikers turned north toward Tokyo with their backs to Kadena to show that they weren&#39;t against the U.S. military, but were protesting the Japanese defense ministry, according to some strike partcipants. (Cindy Fisher / S&S)

Wednesday&#8217;s half-day strike by Japanese base workers to protest their government&#8217;s plan to cut their salaries involved a little shoving and yelling at base gates, but mostly remained calm.

The strike, called by Zenchuro &#8212; or the Japan Garrison Forces Labor Union &#8212; lasted four hours and began at the start of the workday of each worker.

At most bases, union members picketed outside the gates, urging Japanese workers to join the strike and sometimes blocking them from reporting to work.

U.S. personnel and contractors were able to enter the bases. Mission-essential Japanese workers, such as guards and firefighters, worked as usual on Wednesday.

At Yokosuka Naval Base, union members checked IDs of those walking toward the base. Some workers turned around and walked away, after being told by union members that they shouldn&#8217;t enter the base.

At Kadena Air Base, Okinawa, union members made attempts to stop cars that bore Japanese license plates from entering the gate, but no vehicles were seen making U-turns. Cars traveling the highway occasionally tooted their horns in support of the strike.

During one instance, protesters turned on their heels toward the north (in the direction of Tokyo) when a union leader told them through a loud speaker: &#8220;This protest is not toward the military but toward (the Japanese) Ministry of Defense.&#8221;

Teruya said more than 5,000 union members took part in picket lines at 90 base gates nationwide, but he did not have the total number of workers who participated in the strike.

Last month, the Ministry of Defense proposed to abolish Japanese workers&#8217; allowances, which make up about 10 percent of monthly paychecks. The allowances are pay incentives built into each worker&#8217;s salary. The extra pay is meant to compensate individuals for working in a different cultural environment and to reward people for using English on the job.

The decision to abolish allowances &#8212; an $88.8 million annual cost &#8212; came amid the streamlining of government spending, ministry officials said.

Many on strike expressed their concerns over potential cuts of a big chunk of their paychecks at once.

Many also contested the ministry&#8217;s assertion that salaries of base workers exceed those of government workers.

&#8220;It is a dirty trick the ministry uses,&#8221; said Morikatsu Inamine, chairman of the union&#8217;s Air Force branch on Okinawa. &#8220;They presented erroneous information to major media outlets to make it look as if the salaries of base workers were higher than those of government workers.&#8221;

The labor union argued that base worker salaries were, in fact, 20 percent lower than those of Japanese civil service employees.

&#8220;The government high-handedly decided to cut our paychecks,&#8221; said a 42-year-old housing maintenance crew worker on Kadena. &#8220;We should never yield to their demand, because once we give in, I know more and more cuts are coming in future.&#8221;

Ministry of Defense officials declined to comment on the strike.

The Japanese government and union are scheduled to resume negotiations on Tuesday, Teruya said. But if no progress is made, the union plans an eight-hour strike Nov. 30 and to conduct a third walkout in mid-December, he said.

&#8220;We hope the Japanese government will consider the issue seriously and show their stance as we are prepared to strike again,&#8221; Teruya said. He said they are willing to talk with the government at any time.

The last nationwide strike was conducted 16 years ago, according to Zenchuro.

As of September, 25,530 Japanese were employed at 55 U.S. military installations throughout the country.