Japanese base worker compensated for mistreatment at Camp Zama 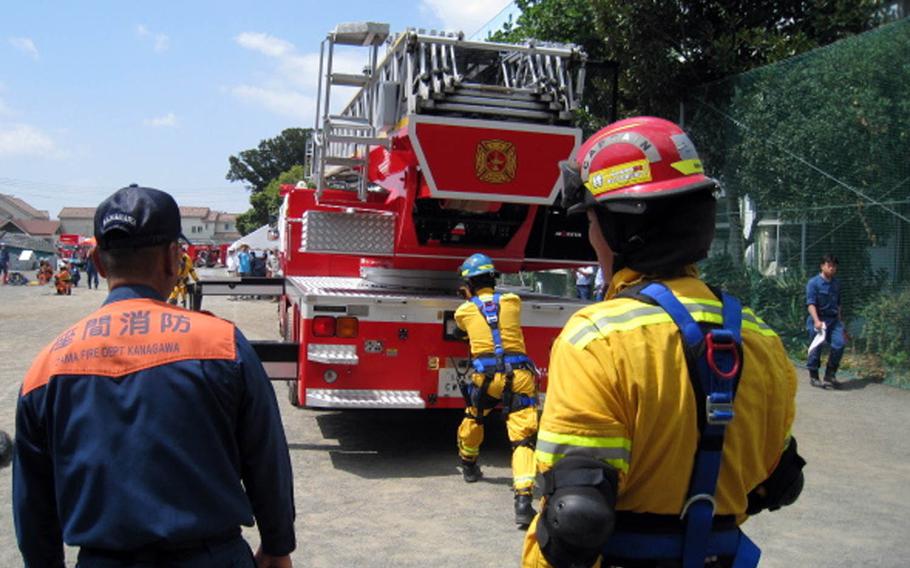 Camp Zama firefighters work with a Japanese unit from Zama City during disaster-response training in 2013. (Courtesy of U.S. Army Japan)

The 44-year-old worker’s pay was cut by 40 percent during the suspension, which began in December 2015, and he wasn’t given a chance to defend himself, Tokyo Shimbun reported.

The man — diagnosed with several mental disorders, including depression — filed for workers’ compensation with the Japanese Labor Standards Office in March 2016.

The worker, who was accused of saying bad things about a supervisor, was cleared of all wrongdoing and returned to his job last July, said Otogawa, who added the man also received back wages to make up for the pay cut.

The Atsugi Labor Standards Office investigated the claim and approved compensation. Investigators concluded the man was treated unfairly based on unproven claims and that this caused his disorders, Tokyo Shimbun reported.

Japanese base workers are employed by the Japanese government but work for the U.S. military.

“The United States Army in Japan treats all of its employees with dignity and respect regardless of the employees’ nationality or country of origin,” U.S. Army Garrison Japan officials said in a statement. “Allegations of mistreatment of any kind are not tolerated at Camp Zama, or anywhere else in the U.S. Army.”

No one was punished in the case, the labor union official said.

The compensation will be paid out of government-administered insurance, which all employers must have for their employees in case of work-related injuries, illnesses and deaths, according to the Zama Defense Office.

“Although those working with the fire department and security may be treated just like service members or civilians, they are Japanese workers and are subject to Japanese laws even on base,” Otogawa said.

It is often difficult for Japanese inspectors to respond to base workers’ claims since the inspectors can’t freely enter U.S. bases to conduct investigations, he said.

In 2013, the commander of U.S. Army Japan, then Maj. Gen. Michael T. Harrison, was suspended and later retired at a reduced rank after a Japanese base worker complained she’d been unfairly moved to another office and that her allegations of sexual assault against another officer had been covered up.