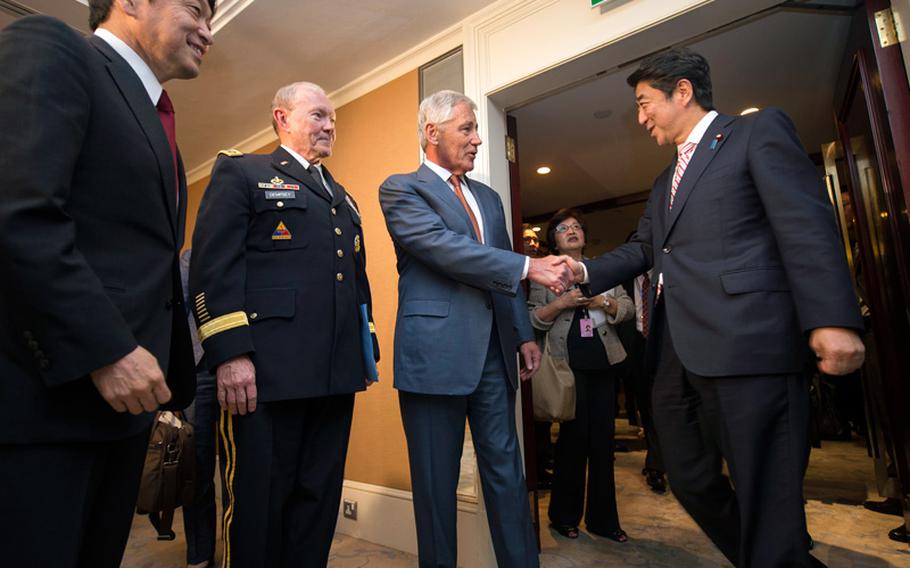 Editor's Note: This story has been updated.

TOKYO — Japan’s coalition government did not agree by the end of the nation’s legislative session on a resolution that would have allowed its forces to defend the United States in combat, government officials said Friday.

The impasse represents a setback — at least temporarily — to Prime Minister Shinzo Abe’s push to reinterpret the nation’s pacifist constitution and allow Japan to engage in collective self-defense with its closest allies.

Ending the ban on collective self-defense would allow Japan to engage in several activities it cannot undertake under the current interpretation of the constitution, according to advocates among Abe’s ruling Liberal Democratic Party. For example, Japan’s Self-Defense Forces cannot legally rescue the country’s citizens when they are held hostage in a foreign country; defend a U.S. ship under attack on the high seas when Japan is not directly attacked; or participate in international mine-sweeping operations, say LDP officials.

Leaders within New Komeito, the junior partner in Abe’s majority coalition, have, during the past month’s talks, voiced opposition to several of the scenarios brought up by the LDP as either unnecessary or feasible under current law.

Opinions vary within the party, which made it impossible for an agreement to be reached during the parlimentary session that ended on Sunday, said New Komeito leader Natsuo Yamaguchi, according to party spokesman Masaaki Nishimura.

New Komeito’s voter base comes substantially from the Soka Gakkai Buddhist organization, whose membership opposes ending the collective self-defense ban. However, New Komeito leaders have also stated that they will not leave the governing coalition over the issue, leaving little choice but an eventual compromise.

Party officials have told Japanese media outlets privately that they hope to delay any agreement on collective self-defense until after local elections scheduled for next spring.

“The New Komeito party fully understands the significance of collective self-defense,” said Kazuya Sakamoto, a professor at Osaka University who specializes in international politics and U.S.-Japan relations. “However, as the party that advocates for pacifism, they want to be as prudent as possible on the use of force.

“Although an agreement was not made within the current Diet session, I believe it will happen in the not-so-distant future,” Sakamoto said.

U.S. officials have qualified their language to avoid the appearance of meddling in domestic affairs, but they have long supported Japanese participation in international operations. President Barack Obama said during an April visit to Japan that he supported the government’s consideration to allow collective self-defense.

Japanese officials have confirmed that they’d talked with U.S. officials in Washington about how ending the ban might affect the U.S.-Japan security alliance. However, Abe still faces opposition from those concerned that easing Japan’s pacifist restraints would lead it down a slippery slope and into a war in which the nation is not directly threatened.

Meanwhile, Abe’s method of reinterpreting the constitution, rather than amending it, continues to draw criticism from some academics, as well as the fragmented opposition within the Diet. Amending the constitution, which was written largely by the United States after World War II, would require two-thirds’ approval by both Diet houses and majority approval by referendum.

Instead, Abe has asked his cabinet to sign off on reinterpretation through a resolution, which would be followed by changes to several laws through majority Diet votes.

On May 15, a government panel of legal experts filed a report that laid the groundwork for a reinterpretation, relying on close examination of the constitution’s wording, supreme court decisions from the 1950s and other precedents.