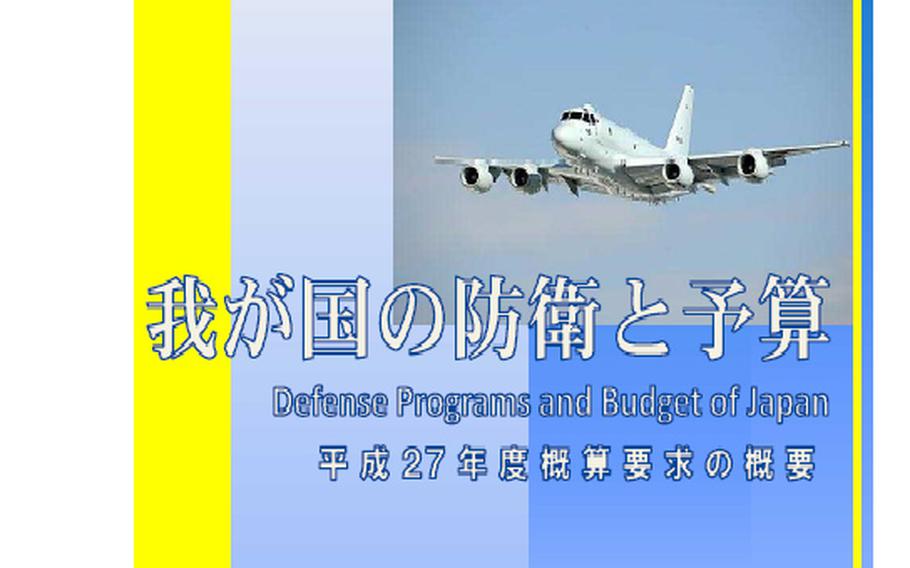 The 2015 Japan defense budget proposal, released on Aug. 29, 2014, calls for a 3.5 percent spending increase over last year. (Courtesy of Japan Ministry of Defense)

YOKOSUKA NAVAL BASE, Japan — Japan is seeking a 3.5 percent defense budget increase as it manages ongoing tensions with China and a realignment of U.S. forces, according to documents released Friday.

The P-1 is a replacement for the P-3 Orion, an anti-submarine and surveillance plane used by Japan since the 1970s.

Surveillance by a similar plane drew international attention this week when it was revealed that a Chinese fighter jet on Aug. 19 staged a mid-air intercept of a Poseidon P-8, the U.S Navy’s P-3 replacement.

Japan, the United States and most other nations consider the 200-mile Exclusive Economic Zone extending from a nation’s shores to be open to surveillance under international law, while China and about 20 other nations do not.

Japan is focusing its resources largely on the East China Sea, where the Japanese-administered Senkaku Islands are claimed by China. Last year, China declared an air defense identification zone directly over the uninhabited islands, which China calls the Diaoyutai.

In an August white paper, Japan accused China of attempting to gain its territorial claims through coercion.

“China has intruded into Japanese territorial waters frequently and violated Japan’s airspace by its government ships and aircraft,” according to the white paper.

The budget proposal also includes $1.1 billion for the realignment of U.S. forces in Japan.

Those plans include the eventual transfer of thousands of Okinawa-based Marines to Guam. The funding also includes the relocation of Marine Corps Air Station Futenma on Okinawa, where site work has begun despite local protests.

Japan will also help fund the relocation of Carrier Air Wing 5 from Naval Air Facility Atsugi to Marine Corps Air Station Iwakuni. The transfer was once planned for this year but is now targeted for 2017.