Japan, US train on island where WWII atomic bomb runs once took off 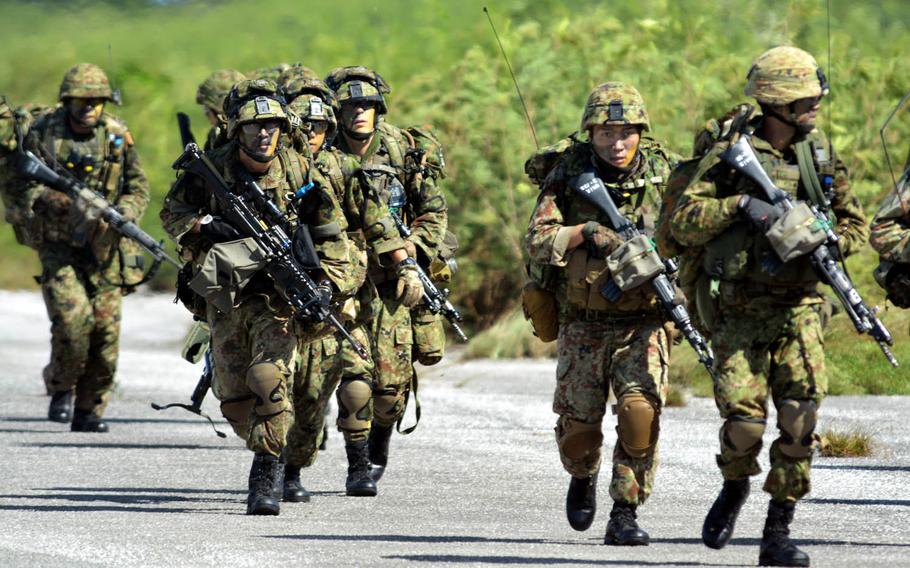 Japanese troops hit the ground after leaving a helicopter during a scenario to retake an island on Tinian in the Northern Marianas, Tuesday, Nov. 8, 2016. The drill was part of the U.S.-Japan Keen Sword exercise. (Erik Slavin/Stars and Stripes)

Japanese troops hit the ground after leaving a helicopter during a scenario to retake an island on Tinian in the Northern Marianas, Tuesday, Nov. 8, 2016. The drill was part of the U.S.-Japan Keen Sword exercise. (Erik Slavin/Stars and Stripes) 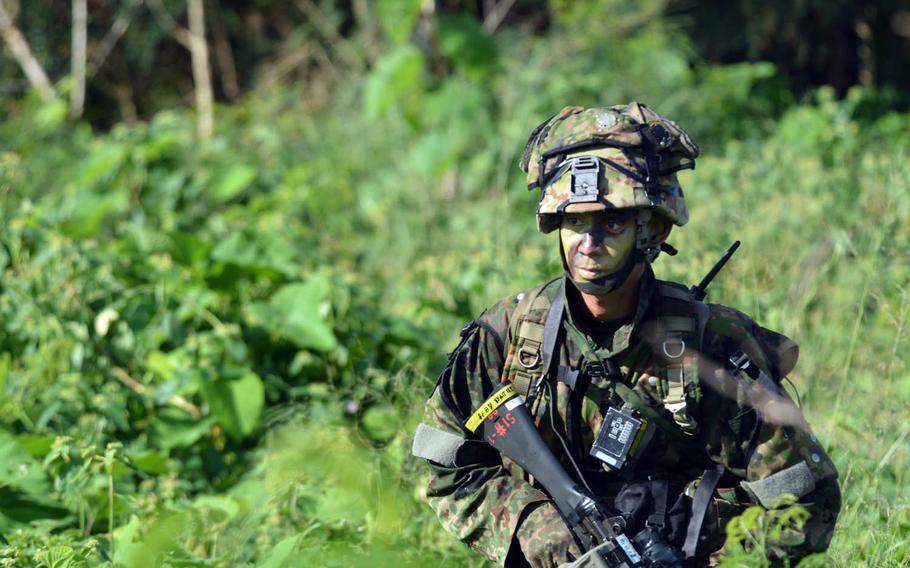 A Japanese fighter pops out of the jungle on Tinian, in the U.S. Commonwealth of the Northern Mariana Islands, Tuesday, Nov. 8, 2016. U.S. servicemembers assisted Japanese troops during a scenario requiring them to retake an island, as part of the bilateral Keen Sword exercise. (Erik Slavin/Stars and Stripes) 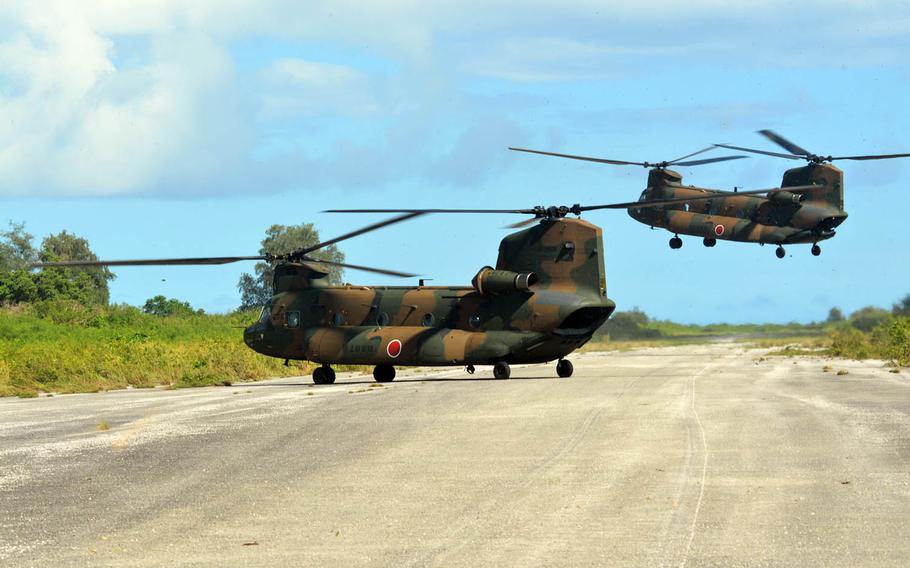 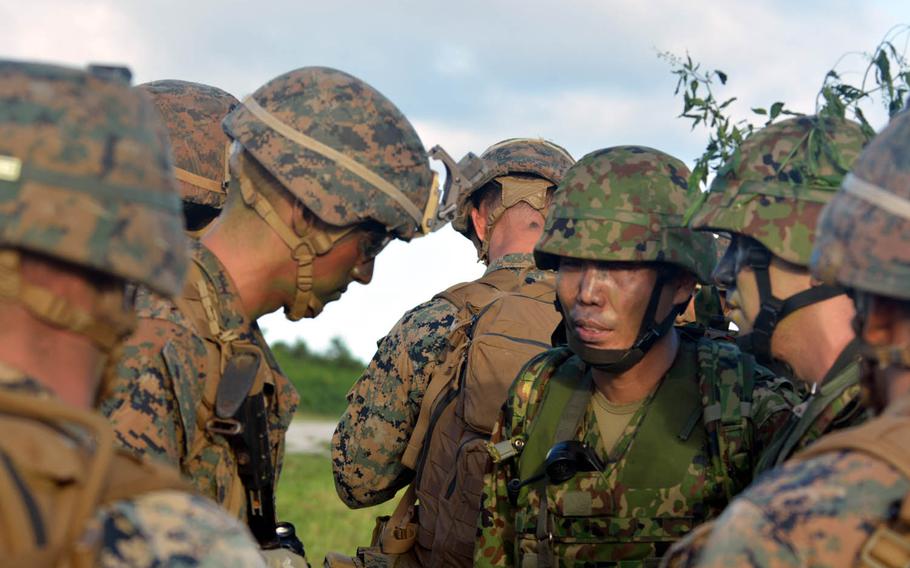 Marines discuss tactics with Japan Self-Defense Forces troops during a scenario to retake a captured island on Tinian, in the Northern Marianas, Tuesday, Nov.8, 2016. The scenario came as part of the bilateral Keen Sword exercise. (Erik Slavin/Stars and Stripes)

Ground troops from the two security allies landed aboard helicopters on the U.S. commonwealth island of Tinian, site of a major 1944 World War II battle where U.S. forces defeated a 9,000-strong Japanese garrison, consolidating their hold on islands within striking distance of the Japanese mainland.

On Tuesday, servicemembers from both sides hiked into a tropical jungle to mop up against a mock opposition force. In one case, they marched just a few feet past pits where the atomic bombs headed to Hiroshima and Nagasaki were loaded onto planes 71 years ago.

The U.S. military offered its amphibious operations experience throughout the event, which began Nov. 4. However, the U.S. forces on the ground Tuesday mostly asked the Japanese troops questions and followed their lead.

“This is definitely a JSDF-planned and -executed exercise,” Rear Adm. Marc Dalton, commander of Amphibious Force 7th Fleet, said Tuesday while observing the scenario on Tinian.

Not everything went as planned during the event, which ended Wednesday. The amphibious landing was canceled due to high surf offshore, according to U.S. and Japanese officials.

Troops continued the scenario as if the landing happened successfully. After troops took positions, the plan continued with helicopter assaults, F-2 fighter-jet flyovers and jungle ambushes.

Marines from the 3rd Battalion, 3rd Marine Regiment based out of Kaneohe Bay, Hawaii, embarked on the JS Osumi with Japanese ground troops — many of whom had never spent days on a ship.

After a few days of upset stomachs, the Japanese troops generally found their sea legs, officials said. More Japanese troops will go through the same experience as Japan prepares to stand up a Marine Corps-like brigade by early 2018.

Analysts and former Japanese defense officials have told Stars and Stripes that the planned brigade of 2,100 troops represents a significant change in strategy for Japan, which traditionally has focused on land-based strategy centered on protecting the country’s north from attack.

Chinese claims on the Japan-administered Senkaku Islands, as well as other parts of the East and South China seas, have raised security concerns among Japan and its allies in recent years.

The U.S. is obligated to help defend Japan if another country invades its recognized territory under the terms of the U.S.-Japan security alliance.

However, until last year, Japan had no recourse to join the fight under its restrictive self-defense laws if U.S. forces were attacked without Japan being attacked as well.

The Tinian scenario was part of the Keen Sword exercise, which includes 25,000 Japanese servicemembers and is scheduled to last through Friday.

The allies also held a large-scale missile-defense training scenario near Okinawa as part of the drills, Japanese officials said.

About 11,000 U.S. servicemembers are taking part in the exercise. Most of them are assigned to U.S. Forces Japan, 5th Air Force, Naval Forces Japan, U.S. Army Japan, 3rd Marine Expeditionary Force and the 7th Fleet.