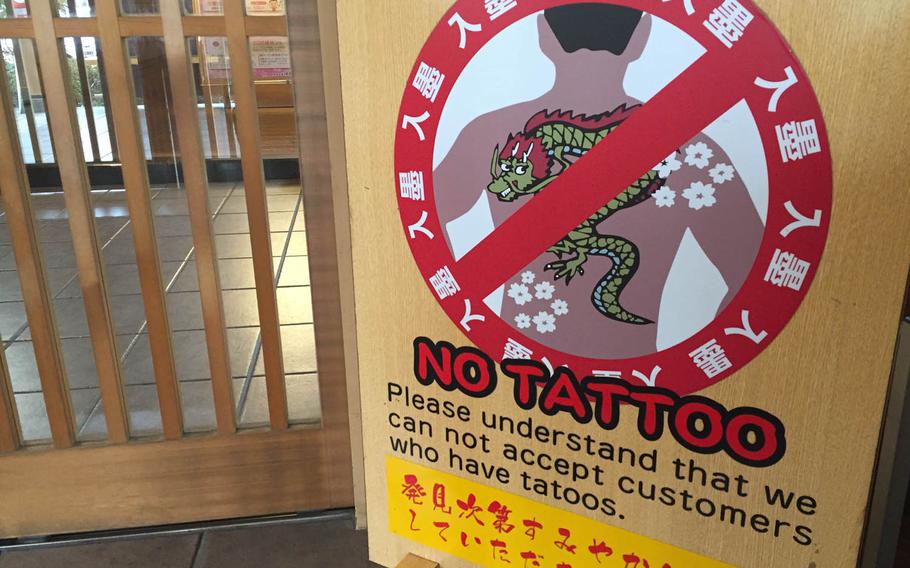 A sign at the entrance of an onsen near Yokota Air Base, Japan, warns that tattooed guests are not allowed inside the public bath, Wednesday, March 23, 2016. The Japan Tourism Agency is urging the popular traditional hot springs spas to relax their tattoo policies for foreign guests as the country attracts a record number of overseas visitors. (Aaron Kidd/Stars and Stripes)

A sign at the entrance of an onsen near Yokota Air Base, Japan, warns that tattooed guests are not allowed inside the public bath, Wednesday, March 23, 2016. The Japan Tourism Agency is urging the popular traditional hot springs spas to relax their tattoo policies for foreign guests as the country attracts a record number of overseas visitors. (Aaron Kidd/Stars and Stripes) 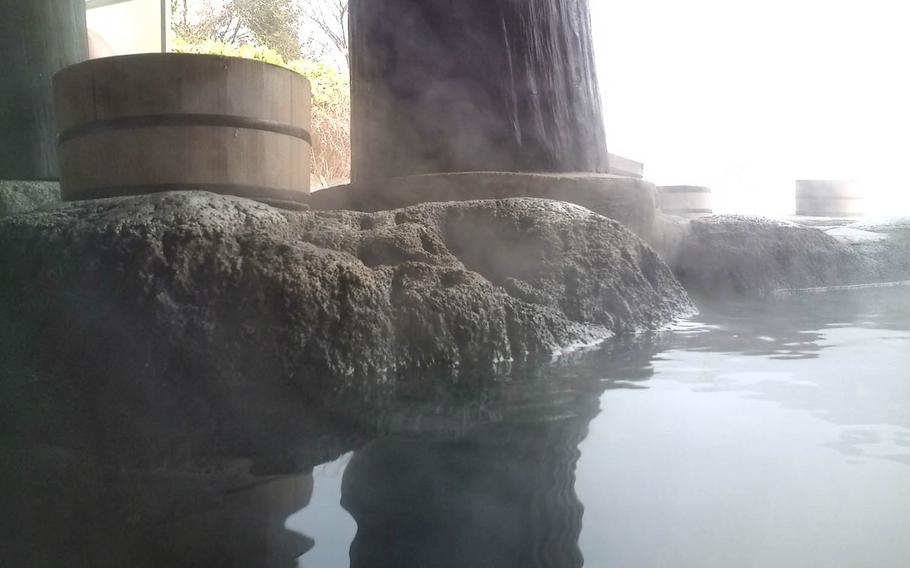 An outdoor hotsprings bath at a tourist hotel in Yufu, Japan. The public baths, admired for their reputed health and beauty benefits, have a history of denying entry to inked visitors because of an association between tattoos and yakuza, the Japanese organized-crime syndicate. (Courtesy of Wikicommons)

Public baths, including onsens, are admired for their reputed health and beauty benefits but have a history of denying entry to inked visitors because of an association between tattoos and yakuza, the Japanese organized-crime syndicate.

Japan Tourism Agency officials are asking public-bath operators to consider that many people have tattoos for religious, cultural or fashion reasons, and that tattoos themselves pose no sanitation problems.

The agency is also providing the spas with solutions for accepting tattooed guests, such as covering the ink with skin-toned tape, offering special bathing times or providing separate facilities for those with body art.

“It is difficult to institute standards that will satisfy everyone since there are cultural differences in the mindset of foreigners and Japanese toward tattoos,” the agency said in a statement last week. “However, it is necessary to encourage the way in which friction between spa facilities and foreign tourists with tattoos can be avoided as the number of foreign tourists increase.”

In 2013, a 60-year-old Maori woman visiting from New Zealand was barred from a Hokkaido onsen because of her cultural facial tattoos. The highly publicized incident led luxury hotel chain Hoshino Resort Co. to announce that it would allow tattooed guests at its spas as long as their ink is covered.

The effect of no-tattoo policies isn’t limited to tourists. U.S. servicemembers in Japan often reach out to one another on the Internet in search of public baths that are OK with body art.

WhitneyMarie Hedgepeth, the spouse of a servicemember stationed at Yokota Air Base in western Tokyo, said recent plans to take a friend visiting from Oklahoma to an onsen near Mount Takao were thwarted by the spa’s no-tattoo policy.

“When we got there, there were two to three separate signs saying in English and Japanese that tattooed people would not be allowed inside,” she said. “They even went so far as to say they couldn’t be covered up with a bandage or anything.”

Hedgepeth said she has the word “always” tattooed on her wrist and a flower on her foot, and her friend has a butterfly on her shoulder.

“We didn’t end up going in because we didn’t want to feel embarrassed about being kicked out, and we especially didn’t want to feel embarrassed because we have tattoos,” she said. “It really felt like we were being discriminated against, but it also felt like it was a cultural thing we couldn’t do anything about. Now my friend is back in Oklahoma, and she didn’t get to experience an onsen, which is unfortunate.”

Last year, in an effort to draw more tourists to Japan, Prime Minister Shinzo Abe asked his cabinet to review restrictions faced by foreign travelers. The tourism agency responded by sending surveys to 3,700 facilities that house public baths, asking questions such as: “Do you refuse admittance to people with tattoos?” “Would you accept someone with tattoos if they cover them with stickers?” and “Do you know the reason for the custom of barring people with tattoos?”

Only about 600 facilities responded, the agency said. Fifty-six percent said they rejected people with tattoos, while 31 percent allowed them. Thirteen percent said they admitted guests who agreed to cover their body art.

Asked why foreigners with tattoos were rejected, most said their policy was based on “moral hygiene aspects,” while others said the decision was part of an industry agreement or because of a request or guidance from outside organizations, such as police or local governments.

The majority of respondents said they’ve had no trouble with tattooed visitors using their bathing facilities; however, just under half said they had received complaints about guests with tattoos.