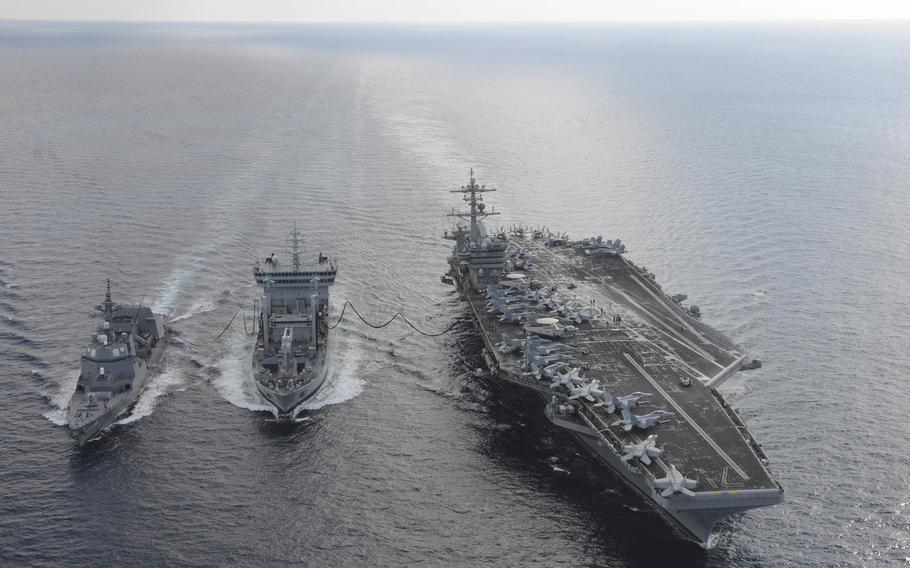 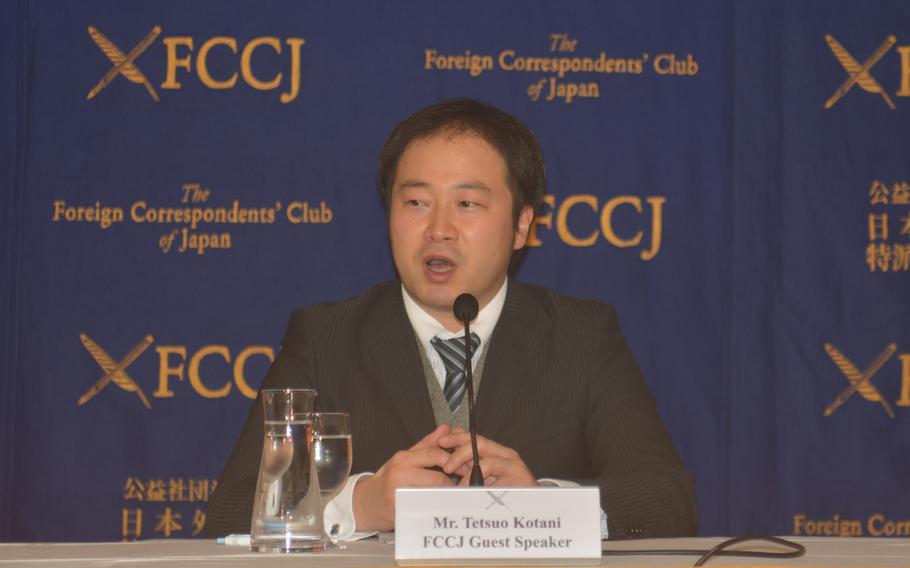 Tetsuo Kotani, a senior fellow at The Japan Institute of International Affairs, says Japan should join the U.S. and other nations in conducting freedom-of-navigation patrols in the South China Sea. (Seth Robson/Stars and Stripes)

TOKYO, Japan — Japan and other nations should join the U.S. and conduct freedom-of-navigation patrols in the South China Sea, a Japanese defense expert said Thursday.

U.S. patrols and surveillance flights in a region where China been reclaiming land and building military facilities have put Washington at odds with Beijing, which maintains an ambiguous claim to about 90 percent of the South China Sea.

Japan is already helping allies in the region boost their militaries, Tetsuo Kotani, a senior fellow at The Japan Institute of International Affairs, told reporters at the Foreign Correspondents’ Club of Japan. For example, Japan has provided Vietnam with six coastal patrol boats and it is sending 10 more to the Philippines. Just this week, Tokyo agreed to lease five aircraft to the Philippines to help patrol the disputed waters it has with China.

Japan’s strategy should be to help those nations establish a “mini Japan Coast Guard” and a “mini Japan Maritime Self Defense Force” to patrol the South China Sea, he said.

“If other international partners join it will provide more legitimacy for the U.S. action,” Kotani said. “The more partners join, the better the leverage.”

The call echoes comments by the U.S. Navy Vice Adm. Joseph P. Aucoin, U.S. 7th Fleet commander, who told reporters in Australia last month that it would be in the region’s “best interests” if Australia and other nations sent warships within 12 nautical miles of disputed territory, according to the Sydney Morning Herald.

An international freedom-of-navigation effort would put pressure on China to abide by the U.N. Convention on the Law of the Sea, which sets rules for resolving maritime disputes, Kotani said.

A Law of the Sea challenge by the Philippines to China’s island-building currently is being considered by an international tribunal in The Hague. But, even if tribunal rules in favor of the Philippines, Kotani said he doesn’t expect China to comply.

China’s island-building is part of an effort, including the deployment of strategic submarines from Hainan Island, to turn the South China Sea into “a Chinese lake” — something that would undermine U.S. deterrence and Japanese security, Kotani said.

“Japan’s prosperity and security relies heavily on regional and global security. For Japan the number one challenge is the rise of Chinese power,” he said.

The moves being made by the U.S. and other nations to prop up smaller countries in the region is not sitting well with China. Chinese officials on Thursday expressed alarm of the increased cooperation between Japan and the Philippines, for example.

“If the Philippines’ actions are to challenge China’s sovereignty and security interests, China is resolutely opposed,” Chinese Foreign Ministry spokesman Hong Lei told a daily news briefing according to a Reuters report.

“I also want to point out that Japan is not a party to the South China Sea issue, and we are on high guard against its moves, Hong said in the Reuters report. “We demand that Japan speak and act cautiously and not do anything to harm regional peace and stability.”

However, Kotani said he doesn’t expect Japan to quickly escalate its efforts to help allies in the region.

Japan’s recently revised defense guidelines, which give more freedom to the military to work with the U.S. and its allies, are a pragmatic response to the rise of China, Kotani said. The new guidelines strengthen the integration of U.S. and Japanese forces and allow for greater cooperation with other important partners such as Australia and India.

On the Korean Peninsula, the revised defense guidelines allow Japan to better assist U.S. and South Korean forces in the event of conflict, he said.

“Japan can provide logistical support for other countries’ forces working with the U.S. to include the South Korean military,” he said.

That could include sending ammunition, fuel, water or medical support or providing commercial facilities for other forces to use, he said.