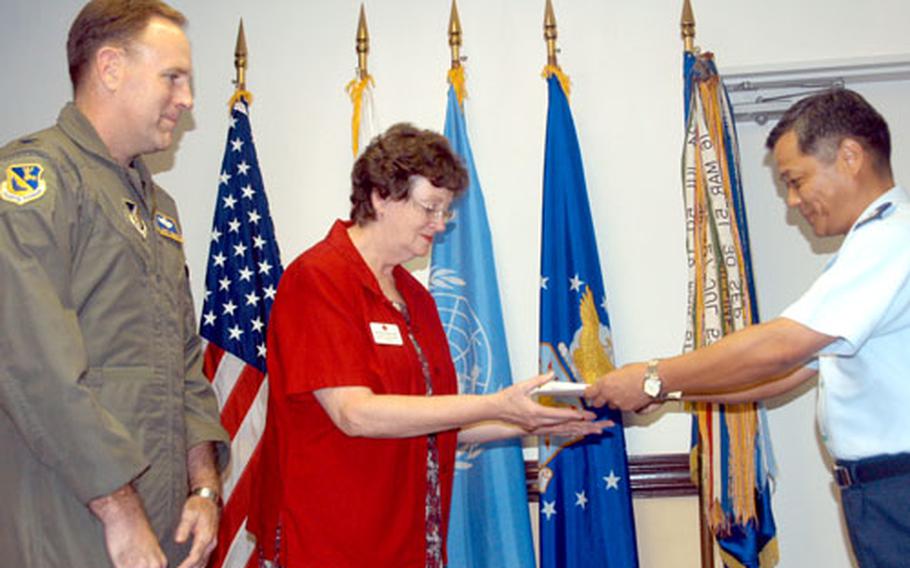 YOKOTA AIR BASE, Japan &#8212; Troops from Iruma, a Japan Air Self-Defense Force base in nearby Saitama prefecture, have donated almost $3,800 in cash to benefit Hurricane Katrina victims.

Goodwin, 374th Airlift Wing commander, said the storm that ripped into the Gulf Coast region in late August had a &#8220;personal impact&#8221; on Yokota community members, with many wondering about the fate of family and friends in Katrina&#8217;s aftermath.

&#8220;It fills my heart with joy to know we have such good friends here who are more than willing to come to the aid of the American people,&#8221; he said. &#8220;This is just another example of the great relationship between our two nations. We&#8217;re willing to help each other in times of disaster. That only strengthens the alliance we have together.

&#8220;On behalf of the American people, I personally thank them for their generous donation to assist and help the victims of Hurricane Katrina.&#8221;

The money, raised solely from personal contributions at Iruma, will be exchanged for dollars at Yokota&#8217;s Community Bank and go into the Red Cross disaster-relief fund, Dustman said. The organization is helping storm victims get re-established through donations such as food, clothing and some household furnishings.

&#8220;Our commander (Maj. Gen. Mitsumasa Ishii) said it&#8217;s really a big tragedy,&#8221; Tomita said through a translator. &#8220;We have a good relationship with Yokota Air Base. &#8230; I personally heard that their friends and relatives all suffered. We felt we needed to do something to help those victims. Then, we asked everyone for help.&#8221;

According to Dustman, September is American Red Cross Preparedness Month.