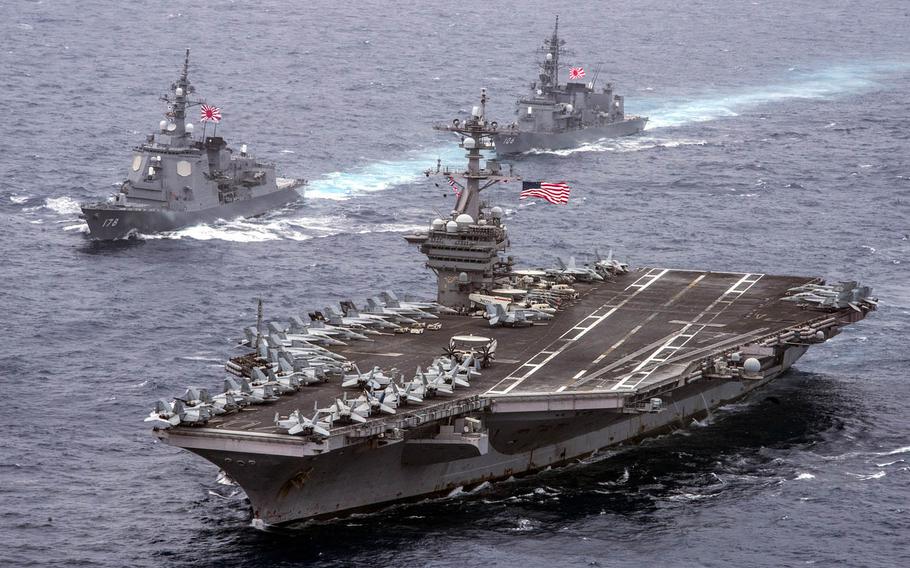 Adm. Katsutoshi Kawano called North Korea’s recent missile launches a serious and imminent threat that requires close trilateral cooperation between the U.S. and South Korea. The communist state’s tests and work on building a launch-capable nuclear warhead signal “a new stage” in that threat, he said.

“The issue is whether [nuclear devices] have been miniaturized to the extent to which they could be loaded on [to a ballistic mis-sile],” Kawano told reporters. “I believe we cannot say clearly whether this is a fact at this stage; however, I also believe this is something we cannot be optimistic about.”

Japanese ships and aircraft have been conducting exercises in recent weeks with the USS Carl Vinson strike group and other U.S. forces in the region, as they continue to watch for signs of a potential North Korean nuclear test.

“As the security environment becomes more severe, we believe strengthening the U.S.-Japan alliance will become even more important than it has to date,” Kawano said.

Kawano acknowledged concerns in Japan about the bilateral military relationship prior to the change in presidential administrations. President Donald Trump questioned the value of several of America’s alliances during campaign speeches.

However, Kawano said there has been no change in defense cooperation between the counties since Trump assumed office.

“Rather, it has continued to progress,” Kawano said.

To guard against North Korea’s advances, Japan is upgrading its Pac-3 Patriot missile defense and its Aegis ship missile-defense systems, he said.

Kawano added that tensions over China’s rapid military modernization and its “lack of transparency” are a continuing source of security tension for Japan and the region.

Japan scrambled its aircraft a post-World War II-record 1,168 times last year in response to potential incursions by foreign military aircraft into Japanese territory. Of those, 871 were Chinese, Kawano said.

China considers the Japan-administered Senkaku Islands its own and has declared an air defense identification zone over them. The U.S. has said it would defend Japan if any other nation at-tacked the islands under the terms of the bilateral security alliance.

Japan will have a Marine Corps-like amphibious brigade ready next March, Kawano said, in a bid to shore up its island defense.

Kawano declined to comment on Prime Minister Shinzo Abe’s plans for amending the Japanese constitution. Abe, whose ruling coalition commands a large majority in the nation’s Diet, is seeking to clarify the Self-Defense Forces’ role.

Since the constitution’s adoption 70 years ago, it has never been successfully amended. Any constitutional changes would require two-thirds assent in both the upper and lower houses of the Diet, as well as majority approval in a referendum.

Although Abe’s Liberal Democratic Party-led coalition holds a two-thirds majority, he will have to convince various factions within the coalition to back his proposal.

Meanwhile, recent polls show anything from support to strong op-position, depending on phrasing, for changing Article 9, which pledges Japan to “forever renounce war as a sovereign right of the nation and the threat or use of force as means of settling international disputes.”

The article also bars Japan from maintaining land, sea and air forces. The Self-Defense Forces, which at 250,000 personnel is among the largest forces in the world, is viewed as constitution-al by Abe because of its defense orientation.

“But, unfortunately as many as 70 or 80 percent of constitutional scholars say it isn’t,” Abe said during Diet discussions earlier this month, according to Bloomberg News. “It’s our responsibility to change that situation in our generation.”

A 2015 reinterpretation of the constitution that allowed Japan to defend its close allies in combat in narrow circumstances drew majority opposition for the same reason. However, Abe and his co-alition increased their majority last year on the strength of economic programs and a lack of a cohesive political opposition.