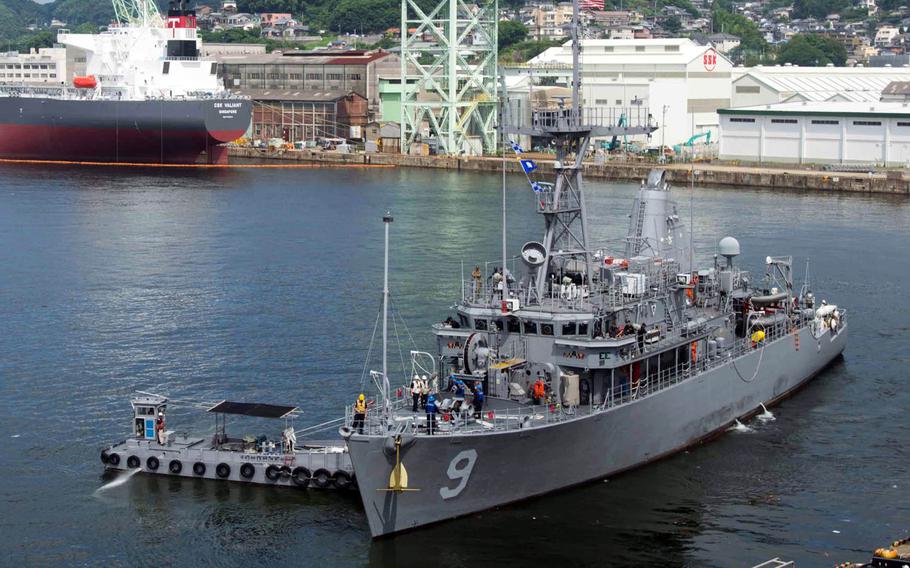 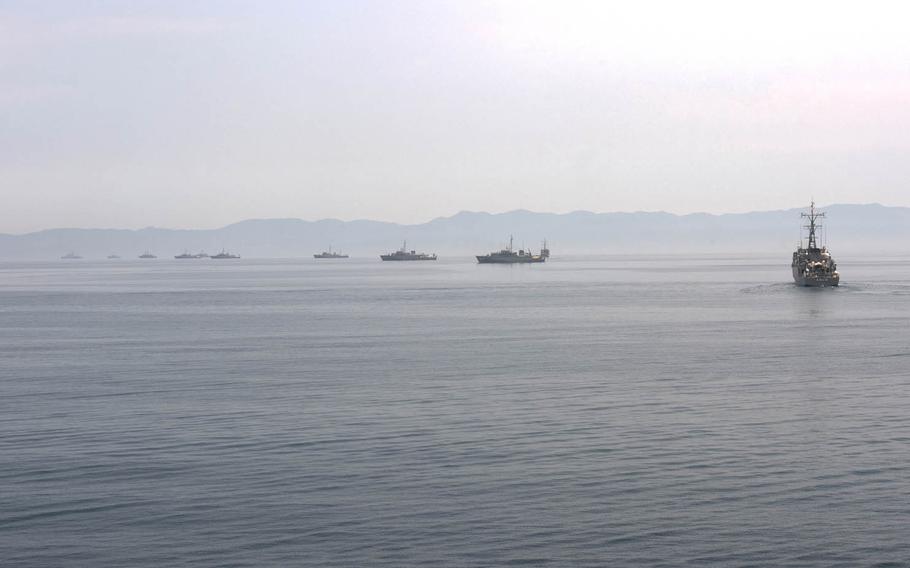 Ships from the Japan Maritime Self-Defense Force stand by during a mine countermeasures exercise at Mutsu Bay in northern Japan, July 20, 2017. (William McCann/U.S. Navy)

YOKOSUKA NAVAL BASE, Japan — The U.S. and Japan trained together recently to improve the Japan Maritime Self-Defense Force’s ability to protect Navy vessels.

The mine countermeasures ships USS Pioneer and JS Bungo took part in the drill Wednesday at Mutsu Bay in northern Japan, a JMSDF spokesman told Stars and Stripes. The vessels practiced communications procedures to prepare for situations where Japan’s navy is called upon to help the United States.

“[The drill] aims to improve the tactical skills of the maritime self-defense forces as well as to strengthen the relationship with the U.S. Navy,” a JMSDF statement said.

The communications drill was separate from a mine countermeasures exercise both ships had been conducting since July 19. Units practiced minesweeping techniques and searching for mines using sonar, a Navy statement said. The exercise ended Friday with a drill in which U.S. and Japanese ships work together to ensure a route is clear of naval mines.

Wednesday’s drill marked the first time the JMSDF has taken part in such training since Japan enacted security legislation last year allowing its Self-Defense Forces to aid the U.S. while under attack, the JMSDF spokesman said. In the past, Japanese warships could use force only when directly under fire.

Japan first protected an allied vessel in May when the helicopter carrier JS Izumo escorted the USNS Richard E. Byrd on a mission in Japanese waters to resupply an unnamed Navy warship that was helping to defend against North Korean missiles.

Prime Minister Shinzo Abe’s approval rating, which dipped after the security legislation was enacted, is expected to sink further after Defense Minister Tomomi Inada resigned Thursday amid allegations she helped cover up details of a Japan Ground Self-Defense Force deployment to South Sudan that was enabled by the legislation.

Opposition parties are expected to question Abe’s responsibility in appointing Inada, which could be another blow to an administration that saw its lowest approval rating since he took office in 2012, Mainichi Shimbun reported. Abe’s latest approval rating was just 26 percent, according to a poll conducted by the newspaper July 22-23. That’s 10 points lower than the previous month.