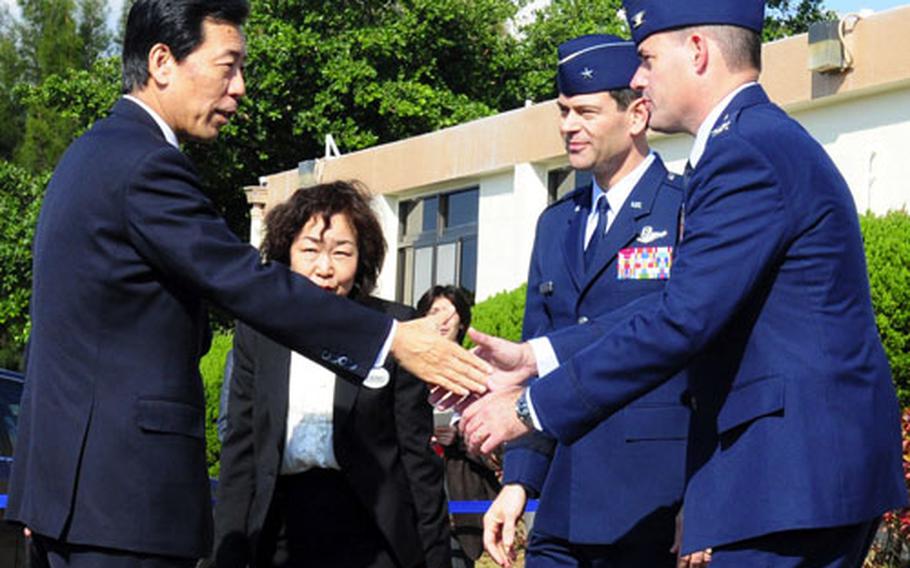 &#8220;What people here hope for is to move the operations outside Okinawa,&#8221; Nakaima said during a meeting with Hirofumi Hirano.

Hirano, who heads a committee tasked with finding a settlement on the relocation issue, flew to Okinawa on Friday to meet local and U.S. military officials.

&#8220;Please make a decision by giving consideration to the call of the Okinawan people,&#8221; Nakaima urged Hirano during their meeting at his office.

Hirano said the committee is working hard to find a solution acceptable to both the U.S. and Japanese governments by May.

&#8220;As the chairman of the committee, I am here to see for myself the situation (of the military presence) and hear voices directly,&#8221; he said.

While Japan&#8217;s center-left government is mulling over a 2006 bilateral agreement to move the Futenma operations to Camp Schwab along Okinawa&#8217;s rural northeast coast, the United States has maintained that the planned airfield at Schwab is the only viable plan.

Following the meeting, Hirano said the committee would review every possible proposal.

Kadena Air Base.Nagasaki, where Japan&#8217;s Maritime Self-Defense Force Omura base and the Ground Self-Defense Force Ainoura post in Sasebo are located.Ie-shima Island, where a Marine Corps auxiliary airfield is located.Shimoji Island, about 180 miles south of Naha, where an idle training runway for a commercial airlines is located.Before leaving Okinawa on Sunday, Hirano was scheduled to visit Kadena Air Base and Camp Schwab and to fly over Ie-shima, Shimoji and Yonaguni, Japan&#8217;s westernmost island near Taiwan. The visit was the cabinet secretary&#8217;s first since assuming office in September.

Meanwhile, U.S. Secretary of State Hillary Rodham Clinton will meet Tuesday in Hawaii with Japan&#8217;s foreign minister. Clinton and Katsuya Okada are scheduled to hold talks that will include discussions about the relocation of Okinawa-based Marines.