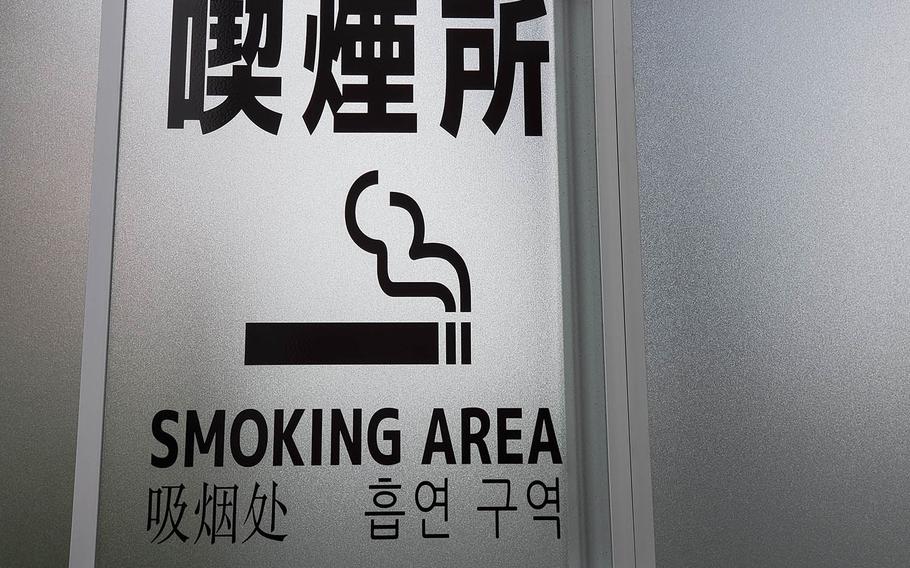 Smoking in many restaurants and bars across Japan will be banned starting Wednesday, April 1, 2020. (Theron Godbold/Stars and Stripes)

TOKYO — People will no longer be allowed to smoke in most restaurants and bars in Japan starting Wednesday, according to the Ministry of Health, Labour and Welfare.

The ban, which includes heated tobacco like cigarettes and cigars but not e-cigarettes, protects people “who want to avoid getting exposed to secondhand tobacco smoke,” according to a health ministry document explaining the law.

It’s part of a revised Health Promotion Law passed in 2018. It applies to all restaurants and bars across Japan but exempts establishments that sell tobacco, such as cigar bars, and some small bars and restaurants that meet conditions set by the law.

Exempted establishments are required to put up signs at the entrance to indicate that smoking is allowed.

Local governments will issue warnings to businesses that fail to comply with the new regulations. After several warnings, they could face fines up to $4,600, Nagahama said.

About 45% of all businesses across Japan will go non-smoking, according to figures compiled in 2018 by the health ministry.

“Perhaps this is still a small step, but setting a regulation like this, it will give more power to the manager to ask customers not to smoke in the restaurant,” Nagahama said.

For example, restaurants and bars in Tokyo are exempt only if they are run by the owner or the owner and his or her family, he said. “It has been proven that passive smoking has health risks. The ordinance aims to protect children and employees, who are in a difficult position to stop passive smoking,” Miyakawa said.

About 84% percent of some 160,000 restaurants and bars in Tokyo should become non-smoking after Wednesday, he said.