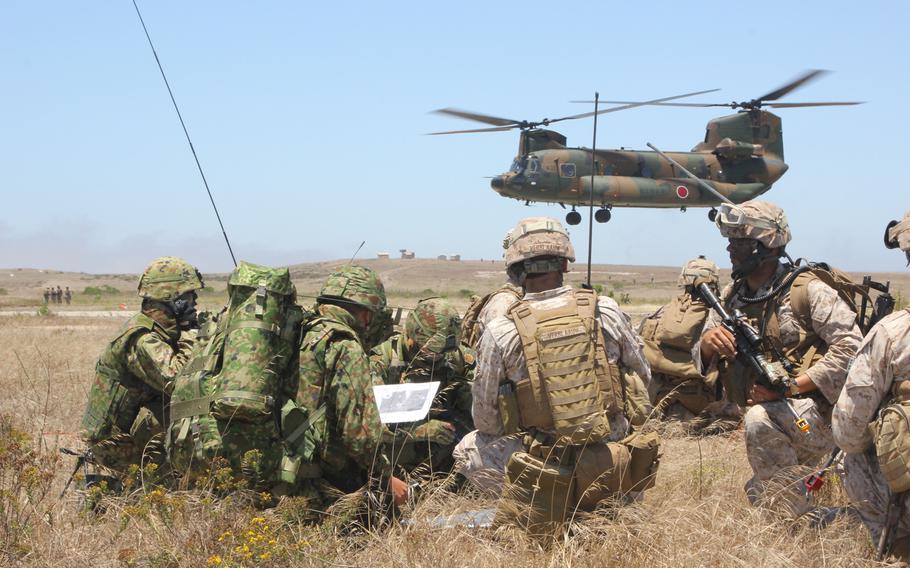 U.S. Marines and Japanese Self-Defense Force soldiers go over maneuver tactics while conducting amphibious assault operations on San Clemente Island on June 17, 2013. Japanese Prime Minister Shinzo Abe has been pushing for ''collective self defense,'' which would allow his country's military to defend its allies in the event of an attack. (U.S. Marine Corps photo)

In a July 5 Yomiuri Shimbun poll, 80 percent said the government hadn’t properly explained the proposed changes that, among other things, would allow the Japanese military to legally defend U.S. forces in combat.

Earlier, a Kyodo News poll found that 63 percent of Japanese citizens did not think the security bills should pass during the current legislative session, which ends in September. Only 25 percent favored passage of the changes, with the remainder undecided.

Abe now risks either alienating voters, or conceding that his pledge — in an April 29 speech before both houses of the U.S. Congress — to pass the bills this summer was an overreach.

The United States favors a stronger regional security role for Japan in light of North Korea’s continuing nuclear program and China’s growing assertiveness over claims to 90 percent of the South China Sea.

The current law allows Japan only to defend itself. For example, Japan couldn’t shoot down a North Korean missile headed for Hawaii, nor could a Japan Self-Defense Forces ship fire on a vessel attacking the U.S. Navy, unless Japan were also under attack.

“Legally, the SDF is an extension of the police,” said Kenji Isezaki, professor of peace and conflict studies at the Tokyo University of Foreign Studies. Isezaki is part of an 11-member advisory panel for the government’s security legislation.

While abroad, the SDF has no more authority to kill than U.S. police officers would while in a foreign country, even if it happened while rescuing Japanese hostages in a combat zone. SDF servicemembers would face manslaughter charges in Japan if they did fight abroad, Isezaki said.

Had the government focused on scenarios, such as keeping its forces from facing criminal charges during rescues, or even supporting a U.S. ship under fire, past polls indicate they might have gained popular support.

Instead, Abe began talking about how Japan would need to protect access to energy supplies if Iran ever mined the Strait of Hormuz. That gave the Diet’s relatively weak opposition parties an opening to stoke popular concern that Abe could get Japan embroiled in a foreign war.

“I think [Abe] went wrong by really insisting on including minesweeping as a specific example of exercising collective self-defense,” said James Schoff, senior associate with the Carnegie Endowment, a global think tank.

Abe’s Liberal Democratic Party has compounded its errors in recent weeks. It suspended four junior lawmakers after they called for several popular newspapers to be shut down or boycotted by businesses, due to their critical coverage of the security bills.

The LDP also hand-picked its own constitutional expert, as did two opposition parties, to testify to the Diet on the security bills’ legality. All three, including the LDP’s choice, said the bills violated the constitution’s anti-war clause.

Isezaki agreed that the legislation does little to address the constitutional dilemma.

“The bills would not change where Japan stands today, because it all goes back to the constitution,” Isezaki said. “The legislation is not enough for SDF to supplement U.S. military operations.”

Japan would need a constitutional amendment — something that has never passed in Japan’s post-WWII history — to allow collective self-defense, according to Isezaki and other scholars.

Abe’s cabinet instead chose to “reinterpret” the constitution last year, which cleared the way for the current legislation.

Under the cabinet’s interpretation of the constitution, which was written during the U.S. occupation in 1947, the right to “life, liberty and the pursuit of happiness” supersedes all else. A threat to a key alliance, such as the U.S. alliance, would threaten those rights, and thereby require collective self-defense.

Japan would join in if an armed attack on a country “in a close relationship with Japan occurs and as a result threatens Japan’s survival,” but only with minimal use of force and if no other alternatives are available, according to the Ministry of Defense.

Opponents say this language gives future governments too much leeway to go to war.

Despite disagreement among constitutional scholars, Japan’s Supreme Court is unlikely to weigh in anytime soon. It has no automatic right to legal review, meaning a lawsuit would likely require an aggrieved party and years of appeals. The court has been largely silent on defense issues since its postwar inception.

On July 13, a security committee in the Diet’s lower house will review the bills, which could bring them closer to a floor vote. LDP lawmakers have indicated they’ll listen to revision proposals from the opposition Japan Innovation Party, though no promises have been made.

The end product could be something more restrictive than Abe had in mind, but which still allows Japan to follow through on expanding its planning and training opportunities with the U.S., Schoff said. The final proposal must also be strong enough to counter a North Korean threat, he added.

“The danger is that it gets rolled back a little bit more, and essentially the whole idea of collective self-defense doesn’t get expanded at all,” Schoff said.