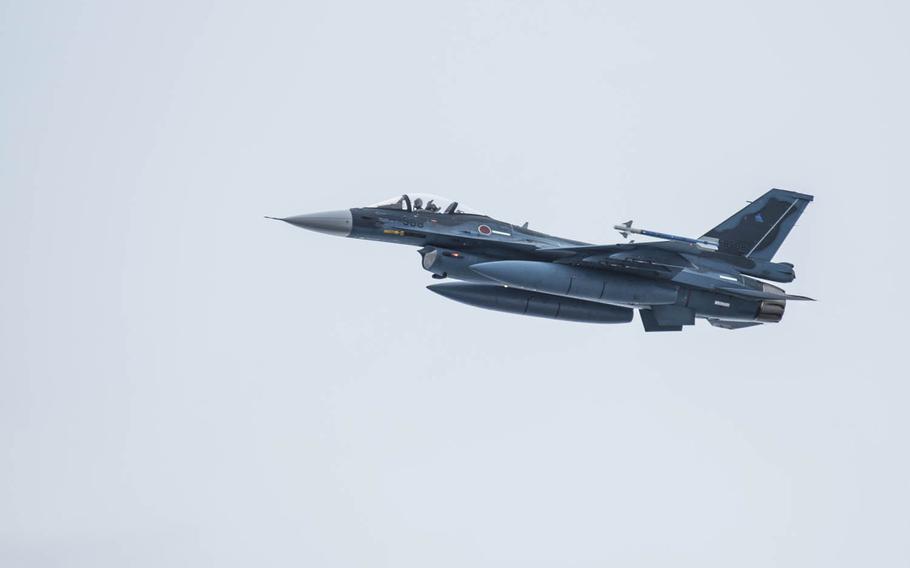 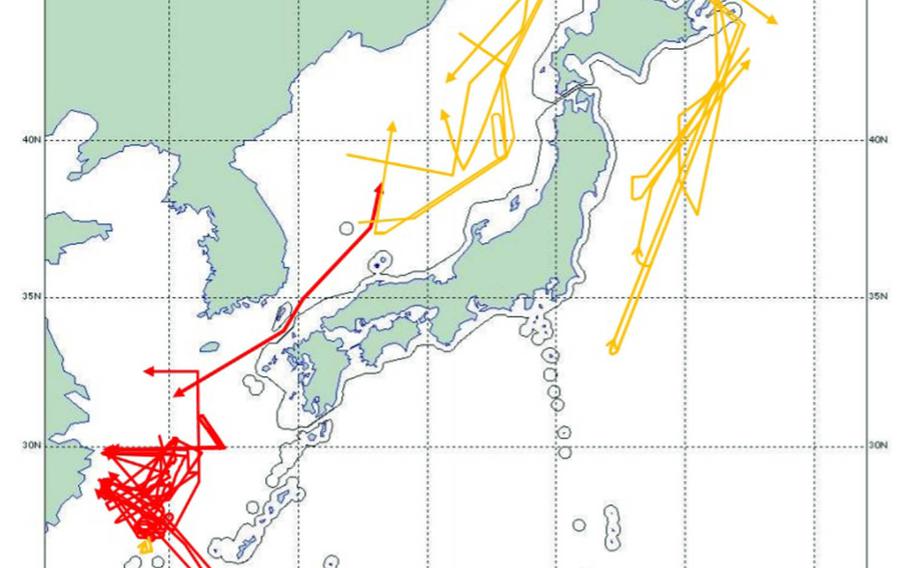 Chinese, red, and Russian, yellow, aircraft that approached Japanese airspace during the past fiscal year are represented in this graphic released by Japan's Ministry of Defense, Thursday, April 13, 2017. (Courtesy of Ministry of Defense)

The Japan Air Self-Defense Force sortied 1,168 times between April 2016 and March 2017, an increase of 295 from the previous year — the highest number of sorties since Japan started scrambling aircraft to counter airspace invasions in 1958.

The scrambles were mostly in response to Chinese and Russian aircraft, including fighter jets, bombers, helicopters and surveillance planes.

While there were no airspace intrusions in 2016, sorties countering Chinese aircraft rose by nearly 50 percent from the previous fiscal year, a troubling trend for Japan as China drives toward a greater regional military presence.

“Generally speaking, an increase [of sorties] against Chinese planes is a reflection of the modernization of Chinese military air power,” a spokesman for the ministry’s Joint Staff said. “They are intensifying intelligence gathering, reconnaissance and expanding their sphere of training activities. From the perspective of our national security, it is necessary for us to keep a watchful eye.”

Among the flight intercepts in 2016, 26 were in response to Chinese aircraft flying between two Japanese territories: fighter jets flying between Okinawa’s main island and Miyako Island and bombers flying over the Tsushima Strait.

Intercepts for Russian aircraft were only up 13 from the previous year, to 301; however, Japanese pilots flew nine sorties to intercept them near their southern Senkaku island chain, a string of uninhabited islands also claimed by China.

Russian aircraft generally fly farther north, where they administer islands near Hokkaido that are also claimed by Japan.

Only 1 percent of the scrambles were in response to aircraft that did not belong to China or Russia.

The number of Chinese aircraft approaching Japanese airspace is expected to grow, the ministry spokesman said. Japan has been trying to get China to agree to establish a maritime- and air-communication hotline.

“We should not, however, unnecessarily raise tensions,” the spokesman said. “Meanwhile, we are resolved to respond appropriately to protect our air space.”