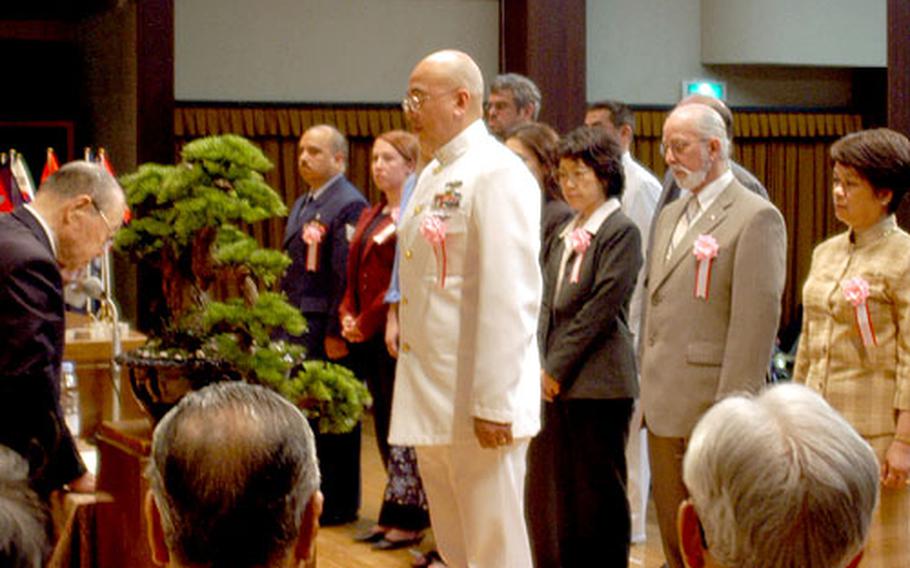 Master Chief Petty Officer Nolly Dizon steps up to receive a certificate as a representative of all non-Japanese awardees during the 54th Zenkokai "Good Conduct" Award ceremony Saturday at Meiji Shrine in Tokyo. (Hana Kusumoto / S&S)

TOKYO &#8212; Eight base residents, a base committee and a command were recognized Saturday for good deeds they have done for their communities.

During the 54th annual Zenkokai &#8220;Good Conduct&#8221; Award ceremony at Tokyo&#8217;s Meiji Shrine, 11 non-Japanese individuals and two non-Japanese groups were among the 308 people and organizations &#8212; mostly Japanese &#8212; recognized in the presentation.

Each year, Zenkokai or The Good Conduct Association of Japan, gives awards to people and organizations that have done good deeds for the community. The non-profit organization is controlled by the Japanese prime minister&#8217;s office.

&#8220;We feel very honored to be recognized,&#8221; said Senior Airman Christina Manuel, the president of 374th Contracting Squadron Orphanage Outreach Committee. The committee was recognized for contributing to public life, guiding youth and children and supporting social welfare. The committee has adopted a local orphanage and has held activities involving the children.

All recipients were called onto the stage by groups and were recognized by the association chairman. All received medals and certificates.

&#8220;I wasn&#8217;t expecting to win ... it was very surprising,&#8221; said Tech. Sgt Robert Flores, nominated by his flight commander. He was recognized for helping Japanese children learn English. &#8220;It&#8217;s something that my wife and I wanted for our children, more just to get the exposure to the Japanese culture,&#8221; he said, &#8220;and how they do things in schools and how interested they are in learning the American culture and the English language.&#8221;

L. Paul Teasley, director of Misawa Naval Air Facility&#8217;s Environmental Department, represented his command in the ceremony. &#8220;It&#8217;s very important for those of us representing the American government, living here, to be good neighbors but it&#8217;s also important for Japanese people to recognize us for being here,&#8221; he said. &#8220;Zenkokai is good organization.&#8221; Misawa was recognized for its environment beautification projects and support of social welfare.

Founded in 1951, the association gave out the awards originally to Japanese only. But due to huge increases in the number of foreign residents in Japan, and Japan&#8217;s closer relationships with other nations, the association began acknowledging foreigners in 1955. Since then, the awards program has recognized a total of 634 non-Japanese individuals and 236 groups headed by non-Japanese.

Tech. Sgt. Robert Flores: He, his wife, Elizabeth, and children Victoria and Xavier have taught English to Japanese children in a Tama City school and have inviting them to their home for parties and dinners.

Orphanage Outreach Committee: The committee sponsored an Ome City orphanage and hosted parties for its children. It also has conducted a summer home-stay program, inviting the orphans to stay in committee members&#8217; homes.

Staff Sgt. Jesse Pendergrass: He volunteered to coach the Yokota High School wrestling team, played a major role in the team&#8217;s success and in winning their first Far East championship. He also was cited as a positive role model for the athletes.

Misawa Naval Air Facility: The facility has fostered friendly U.S.-Japanese relations through acts such as taking part in the Sapporo Snow Festival, striving to help an orphanage in Misawa City and helping with beautification of beaches and parks in neighboring towns.

Master Chief Petty Officer Nolly Dizon and his wife Belinda: They coordinated and ran a program to feed the homeless in Minowa, Tokyo, and were involved in a disco dance party for disabled children.

Chief Petty Officer Alfred Gravina: He initiated a fund-raiser to collect money for St. Joseph Children&#8217;s Home in Tokyo and has worked at beautification and maintenance efforts for the orphanage.

D&#8217;Juana Cephus: She conducted culture exchanges with the Japanese by inviting them to her home and introducing them to American customs and culture. She also has taught English at Sagamidai Elementary School.