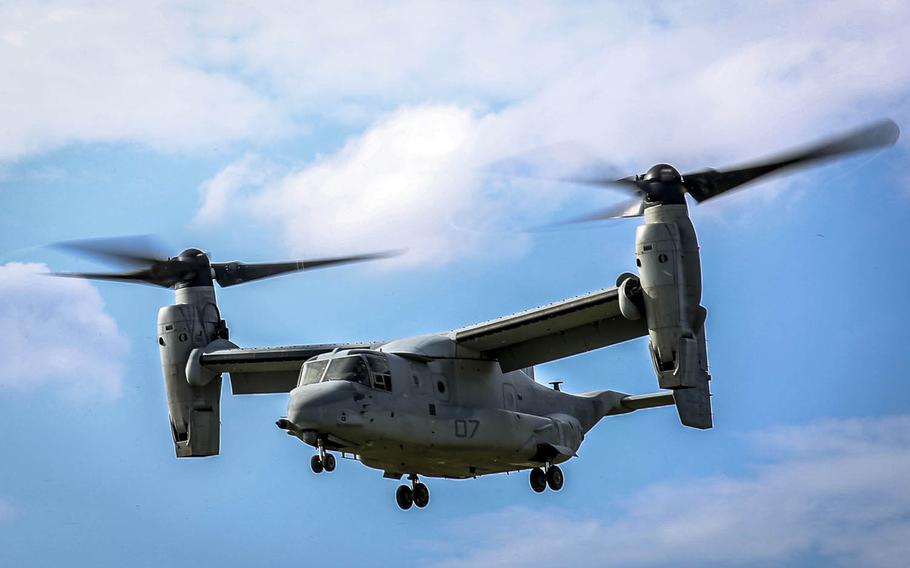 TOKYO — A Japanese contractor is ready to maintain the Marine Corps’ Osprey fleet in Chiba Prefecture, far from the political tensions that surround the aircraft’s operations on the island of Okinawa.

Fuji Heavy Industries was scheduled to hold a ribbon-cutting ceremony Thursday to open the maintenance hangars at the Japan Ground Self-Defense Force’s Camp Kisarazu, about an hour’s drive from central Tokyo on the Chiba peninsula.

The Ospreys are expected to receive overhauls lasting up to four months, said a spokesman for the Defense Ministry’s Acquisition, Technology and Logistics Agency.

Both the Marines and Japan — which plans to acquire 17 Ospreys beginning in 2018 — value the aircraft’s range and lift capabilities. It can carry Marines “twice as fast and five times farther than previous helicopters,” said a service fact sheet.

However, concerns over the safety of the Osprey, which can be flown as a helicopter with its tilt rotors or as a fixed-wing plane, have made it a symbol for demonstrators protesting the U.S. military presence in Okinawa.

In December, a Marine pilot ditched an Osprey off Okinawa’s shore after sustaining damage during aerial-refueling training. The pilot didn’t want to pose a risk to residential areas by attempting to get back to base, Marine Corps officials said.

The incident reminded some Okinawans of a 2004 Sea Stallion helicopter crash at a college near Marine Corps Air Station Futenma, which prompted strong protests.

The Marines and the Japanese are still coordinating a date for receiving the first Osprey, but a spokesman said work could begin later this month.

Ospreys will receive maintenance overhauls once every five years by Fuji Heavy Industries. They also receive daily inspections by Marine flights crews and preventive inspections by maintenance personnel, according to the documents.

While the Marines chose Fuji to perform the maintenance, the Defense Ministry wanted a Japanese company involved to help them learn more about fielding their own Osprey fleet.

“Establishing technical infrastructure domestically will help in the stable operation of Ospreys in Japan,” the acquisition agency said in a document.