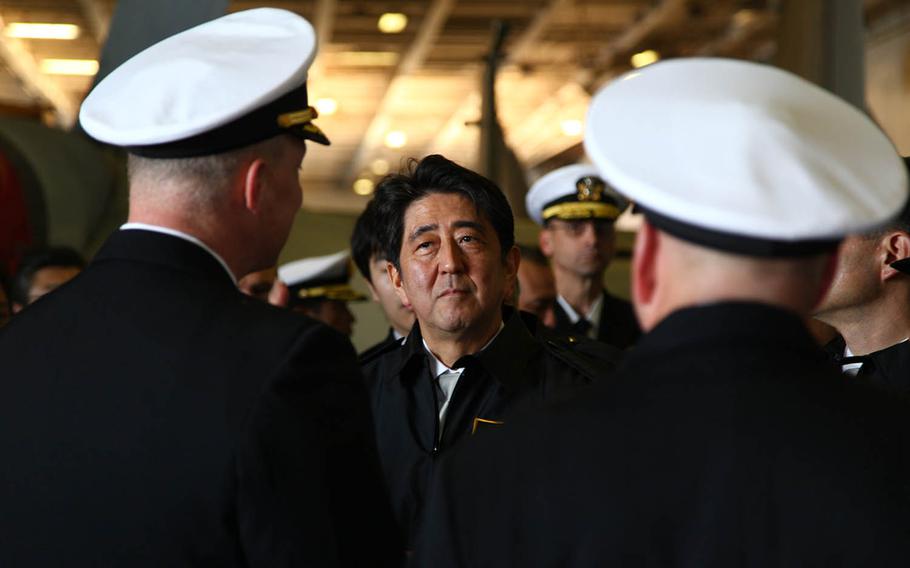 TOKYO — Japan Prime Minister Shinzo Abe defended the necessity of his nation’s security alliance with the United States and spoke out Tuesday against “naked nationalism” amid the U.S. presidential campaign’s often-contentious rhetoric.

Abe credited the security pact for helping to keep the world’s most populous region at peace during a one-hour interview with the Wall Street Journal.

“I cannot conceive of any situation within the foreseeable future when the U.S. presence wouldn’t be necessary,” Abe said following a question regarding whether the U.S. military should leave Japan.

He added that new legislation allowing Japan to defend close allies for the first time would give Japan a greater hand in security efforts.

“By strengthening the Japan-U.S. alliance, we’ll strengthen deterrence, and that will contribute to peace and stability in the region, not just Japan,” Abe said.

Abe’s comments come in light of U.S. presidential candidate Donald Trump’s assertion that the U.S. should be prepared to withdraw its forces from Japan and South Korea if those nations don’t pay more to support them.

“If we say to Japan we need help, you have to help us, because we can’t continue to lose a fortune defending you — you have to be prepared to walk,” Trump said at an April 2 Wisconsin campaign rally, according to Britain’s Independent newspaper.

Japan will contribute an annualized average of 189.3 billion yen ($1.7 billion) over the next five years to support the U.S. military, according to a December deal that took effect this month.

Japan has borne a portion of the costs of maintaining the U.S. military in its country since 1987.

About 50,000 U.S. troops support Japan’s force of approximately 250,000, according to U.S. and Japanese government figures.

South Korea has a similar deal to pay for basing the roughly 28,500 U.S. troops tasked with fighting alongside 650,000 active-duty South Koreans in the event of hostilities with North Korea.

Trump also suggested the possibility of Japan and South Korea arming themselves with nuclear weapons — an idea counter to the world’s broader attempts to minimize nuclear proliferation, and one that both nations immediately dismissed.

Trump and some among both major U.S. political parties question whether the U.S. can afford to maintain its military strength abroad.

Helping U.S. allies to build their own security forces must be a primary goal in the Asia-Pacific, but that is no substitute for U.S. presence, the Center for Strategic and International Studies wrote in an independent January 2016 report commissioned by the Pentagon.

“Diversification of U.S. military posture remains critical not simply for resilience against challenges in Northeast Asia, but also to contend with the growing importance of Southeast Asia and the Indian Ocean region,” the report stated. “We reject the option of withdrawal from the Western Pacific because of these new challenges. Such a withdrawal would lead to rapid deterioration of the security environment and render operations more difficult rather than easier.”

Abe also promoted the May G7 economic summit in Japan during the Wall Street Journal interview, which the prime minister labeled as “a forum to show leadership against actions displaying ‘naked nationalism.’”

Although Abe did not single out any one presidential candidate, Trump has repeatedly bashed U.S. policy for trade imbalances with Asian nations.

Trump has also repeatedly made comments about getting jobs back from Japan, though given Japan’s decades-long economic malaise and labor costs comparable to that of the U.S., any specifics remain unclear.