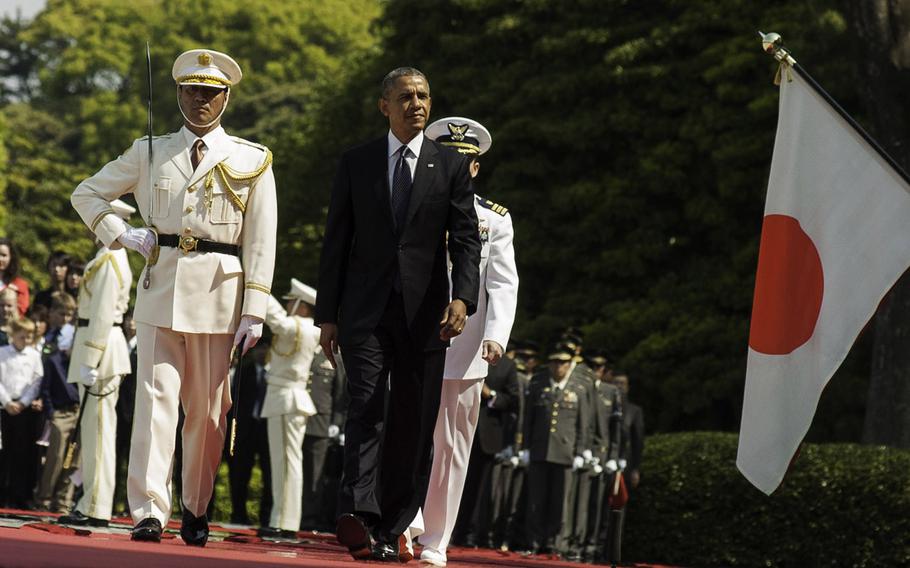 TOKYO — Japan got the security guarantee it sought from President Barack Obama, even if other aspects of his visit with Prime Minister Shinzo Abe didn’t follow the anticipated script.

Obama said little that Defense Secretary Chuck Hagel, Secretary of State John Kerry and other top officials hadn’t already said during the past year about the U.S.-Japan security alliance.

Nevertheless, analysts said Obama’s statements helped reassure those in Japan and the Asia-Pacific region who have doubted his stated commitment to a “rebalance” toward Asia amid U.S. defense budget cuts and pressing challenges in other regions.

The president told reporters Thursday that the Japan-administered Senkaku Islands fall under a provision of the security alliance calling on the U.S. to “act to meet the common danger” if involved in an attack.

Obama’s statement provoked a reaction from China, which claims the islands as an “indisputable” part of its territory and has declared an air defense identification zone directly over them that has been generally ignored. The islands are small and uninhabited, but nearby waters are considered potentially rich in energy and natural resources.

Chinese Foreign Ministry spokesman Qin Gang’s comparatively understated riposte to Obama’s comments concluded the U.S. should “think twice before saying or doing anything” about the islands.

The ministry accused Hillary Clinton of being “ignorant of facts and indiscriminate of rights and wrongs” when she said the same thing in 2013.

Though he did not take a position on the Senkakus’ future sovereignty, Obama’s statement supporting the islands’ defense was designed to please Abe and reassure the Japanese public, said Sheila Smith, senior fellow for Japan studies at the Council on Foreign Relations, a nonpartisan think tank.

“Its absence would have been interpreted in a way that would have cast more doubt on the question of whether the U.S. is really serious on the Senkakus,” Smith said.

Obama’s comments also were followed with interest from five other Asian nations and Taiwan, all of whom have territorial disputes with China.

“The Senkaku issue, despite that they are tiny islands, is now becoming a decisive test in China’s expansionism in the region,” said Kazuya Sakamoto, professor of international politics and Japan-U.S. relations at Osaka University. “There was a need for the United States to make its stance clear.”

The U.S. also gave Abe some help with some of his cherished but unpopular security policies, by backing them in a joint bilateral statement released Friday.

The statement praised Japan’s passage of a secrecy law that “will facilitate enhanced policy and intelligence coordination between the two countries.” The lack of clear standards had led the U.S. to share information more cautiously with Japan than with its most trusted allies, U.S. officials have told Stars and Stripes.

But a December Kyodo news poll found that 82 percent of the public backed revision or repeal of the law, based on fears that its broad language could keep government malfeasance from public scrutiny.

The United States also “welcomes and supports” Japan’s consideration of reinterpreting its pacifist constitution to allow its servicemembers to defend allies in collective self-defense, according to the joint statement. That Abe-backed measure also faces majority opposition in national polls, though it gains support when it comes to specific measures like defending a U.S. ship or rescuing Japanese nationals taken hostage abroad. Under the current constitution, such measures are illegal.

While the Japanese government clearly got what it wanted from a security perspective, the goals shared by Tokyo and Washington on economic issues clearly fell short.

Many analysts had expected a bilateral agreement on the Trans-Pacific Partnership, a 12-nation accord that addresses a broad range of trade sectors ranging from agriculture and automobiles to intellectual property.

The Obama administration has stated that the agreement will lower trade barriers, boost exports and create jobs. However, the agreement faces opposition in various countries over concerns as diverse as internet privacy rights, medicine prices and cattle imports.

As a group, the TPP countries are the largest goods and services export market of the United States, according to government data.

“A thin momentum was lost when the two biggest economies in the ‘TPP 12’ could not deliver at this time,” Asano said.

However, Asano said he does not believe that difficulties in resolving the trade agreement will have much effect on overall bilateral relations. The two countries will have further opportunities to reach an accord in the coming months, Asano added.