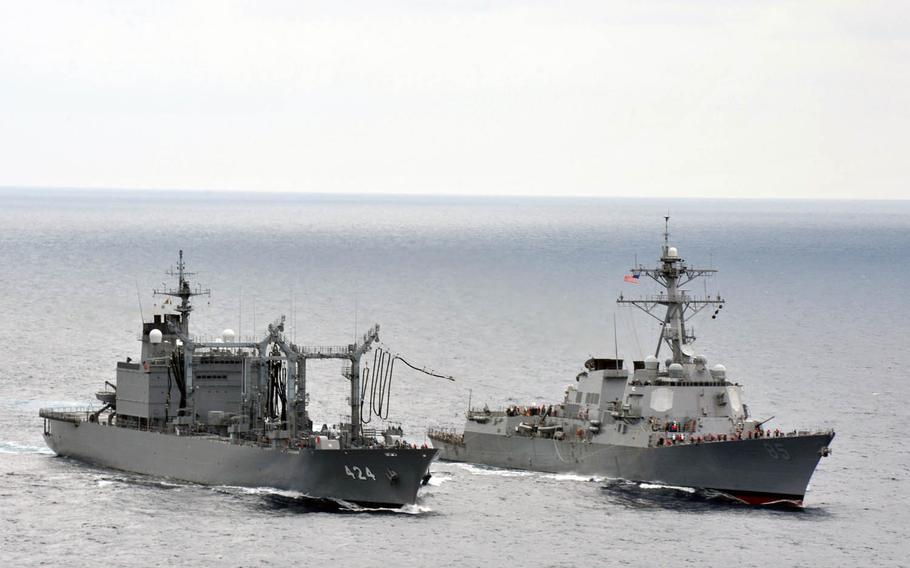 Japan Maritime Self-Defense Force fast-combat support ship JS Hamana, left, conducts a replenishment at sea with the guided-missile destroyer USS McCampbell, June 7, 2012, in the East China Sea. Japan has decided to develop and deploy a land-to-sea missile system designed to enhance defense in the East China Sea at the same time it is embroiled in a tense standoff with China over the disputed Senkaku island chain. (Declan Barnes/U.S. Navy)

CAMP FOSTER, Okinawa — Japan has decided to develop and deploy a land-to-sea missile system designed to enhance defense in the East China Sea at the same time it is embroiled in a tense standoff with China over the disputed Senkaku island chain, according to Japanese media reports.

Vehicle-mounted, GPS-guided missiles with a range of about 186 miles will be deployed to major southern islands such as Miyako in Okinawa Prefecture, the Yomiuri Shimbun reported Sunday, citing unnamed sources, which is customary in Japan. The system’s cost will be proposed in the fiscal 2017 defense budget request slated for release in mid-September.

The Ministry of Defense, which would not deny the move to procure the system when reached Monday, aims to deploy the missiles around 2023.

“Generally speaking, the policy of upgrading capabilities of remote island defense has been authorized in our defense guidelines,” a Defense Ministry spokesman said Monday. “In light of the policy, the ministry is currently in the process of briefing local municipalities of Miyako and Ishigaki of Okinawa and Amami of Kagoshima on deployment of units for land-to-sea guided missiles.”

The missile system is aimed at enhancing Japanese deterrence by upgrading long-distance offensive capabilities, said the Yomiuri Shimbun, which added in a statement clearly aimed at China that the missiles could be trained on foreign vessels in the East China Sea if activities expand in that area.

News of the move comes at a precarious time in the Asia-Pacific, with China repeatedly challenging Japanese sovereignty in the area surrounding the resource-rich Senkaku island chain. Last week, Japan summoned the Chinese ambassador to protest as a standoff involving Chinese government ships in waters claimed by Japan entered its second week. China disputes Japan’s claims to the islands, called Diaoyu by the Chinese.

The standoff continued Monday, with four Chinese ships remaining in the disputed area.

Meanwhile, the joint staff office of Japan’s Defense Ministry declined to confirm or deny that a Japan Air Self-Defense Force jet was scrambled in response to Chinese military fighters flying within 30 miles of Japan’s territorial airspace near the Senkakus.