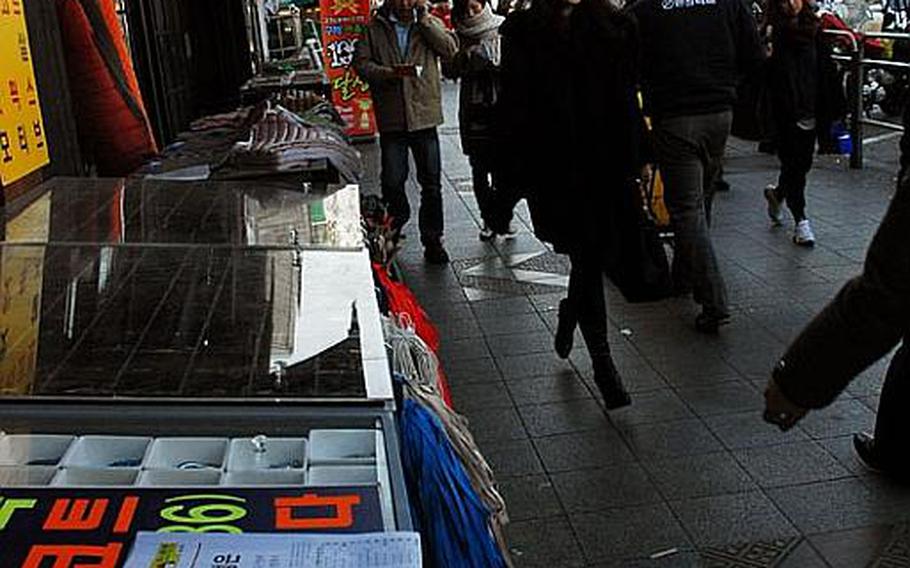 Buy Photo
South Koreans go about their daily business Dec. 20, 2011, a day after news broke that North Korean leader Kim Jong Il was dead. Life appeared to go on as normal for most residents of the South, despite international fears that North Korean internal problems could lead to problems for South Korea. (Alfredo Jimenez/Stars and Stripes)

Prime Minister Yoshihiko Noda has ordered Japanese defense forces to be on alert for any possible dangers from the reclusive communist country, which has a history of launching long-range missiles in the region.

Japan said it hopes to maintain calm and also jump-start talks aimed at getting North Korea to abandon its nuclear ambitions following a meeting earlier this week with Foreign Minister Koichiro Gemba and Secretary of State Hillary Clinton in Washington.

Japanese experts on North Korea said the missile strikes and a mass exodus of refugees would pose a more immediate threat as the hermit kingdom enters a period of potential instability and attempts to shift power to Kim&rsquo;s young son, Kim Jong Un.

&ldquo;We are also in agreement that all sides want stability and calmness during this period,&rdquo; Gemba said on Tuesday, according to Reuters. &ldquo;In addition, we also confirmed that we should maintain our close coordination among Japan, the United States and the Republic of Korea on the efforts toward denuclearization of North Korea, in particular to ensure concrete actions taken by North Korea.&rdquo;

The hopeful note comes after nearly a decade of failed nuclear talks with the rogue nation.

Japan sees a nuclear North Korea as a grave threat in the region and began direct nuclear dialogue with Kim in 2002. The dictator vowed to abide by its agreement with the U.S. to abandon research but immediately restarted the country&rsquo;s weapons program.

It&rsquo;s not believed that Pyongyang has produced a nuclear weapon, but it has built a reputation for being provocative and unpredictable.

In 2009, it fired a Taepodong-2 missile over northern Japan into the Pacific Ocean, which alarmed Japan and the United States. Kim&rsquo;s regime has also admitted to abducting Japanese citizens in the 1970s and 1980s to train its spies and is accused of bombing a Korean Air flight that killed 115 people in 1987.

Following Noda&rsquo;s order on Monday for the country to &ldquo;prepare for any contingencies,&rdquo; the Japanese coast guard has set up five emergency regional headquarters along the Sea of Japan that stretches from Hokkaido in the north to Kyushu in the southwest, coast guard spokeswoman Sanae Tanaka said.

It has also increased surveillance along the coast and security at coastal nuclear facilities, she said.

Hajime Izumi, professor of international relations at the University of Shizuoka, said military tensions might now rise, and the North Koreans might be tempted to engage in provocative military activities, such as new missile launches.

The U.S. has helped Japan create a defense against the Taepodong as well as other missiles by sharing its Aegis missile defense system, which is now deployed on Japanese navy destroyers.

If the death of Kim causes a breakdown of government control, North Koreans could flood across the borders or trek into the Sea of Japan in hopes of escaping an ailing economy and years of oppression, Hiraiwa said.

&ldquo;There is a high possibility that defectors, refugees or those posing as refugees could flood into Japan,&rdquo; he said.

A large number of defections from a country of about 20 million could create a security and humanitarian crisis for Japan and the entire region, Hiraiwa said.

&ldquo;When we think about North Korea, we tend to focus on its aggressive and destructive side, such as launching missiles or abductions, but we need to turn our attention to their weak side as well,&rdquo; he said.