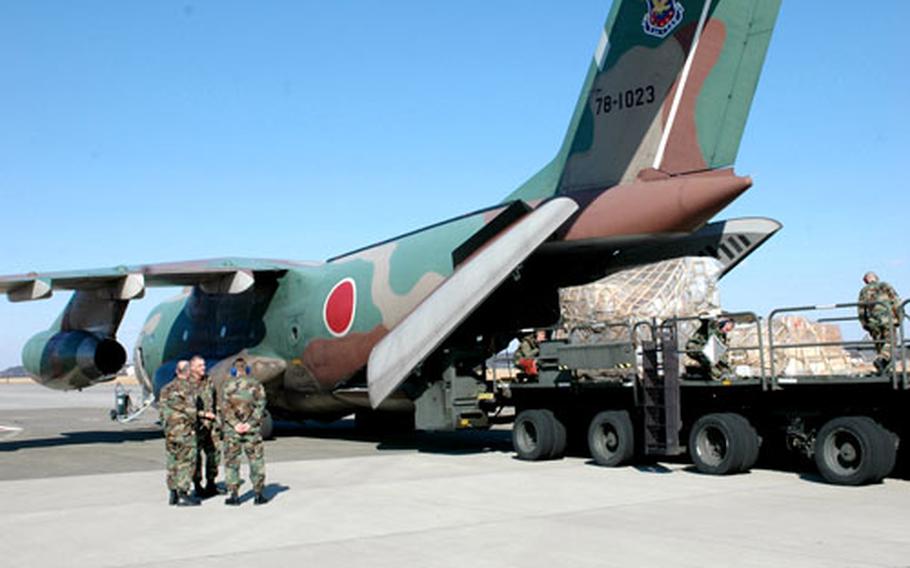 A Japanese C-1 from Iruma Air Base in Saitama prefecture is loaded with cargo Thursday at Yokota Air Base, Japan, during the Japan Air Self-Defense Force’s 300th mission in support of Operation Freedom Lift. The 5th Air Force staged a small ceremony to mark the milestone. (Warren Comer / U.S. Air Force)

YOKOTA AIR BASE, Japan &#8212; The Japan Air Self-Defense Force on Thursday wrapped up its 300th mission in support of Operation Freedom Lift, an effort to haul needed supplies to U.S. personnel stationed in Japan and Guam.

A Japanese C-1 aircraft and crew from Iruma Air Base in nearby Saitama prefecture landed at Yokota, picked up cargo and took off as part of a small ceremony staged by the 5th Air Force to mark the milestone.

The Associated Press reported this week that Japan plans to withdraw its 600 troops from southern Iraq within the next several months.

If such a move transpires, it shouldn&#8217;t affect the JASDF role in Operation Freedom Lift, Reheiser said Thursday. The airlifts are permitted under Japan&#8217;s Anti-terrorism Special Measures Law.

The JASDF began taking part in OFL in November 2001, airlifting supplies and personnel for coalition forces in the war on terrorism. Previous flights traveled to Guam but the current route &#8212; completed once a week &#8212; originates from Iruma and hits Kadena Air Base, Okinawa; Marine Corps Air Station Iwakuni and Yokota.

Reheiser, a C-130 pilot here in the early 1980s, said the Iruma and Yokota bases did virtually nothing together when he first left Japan.