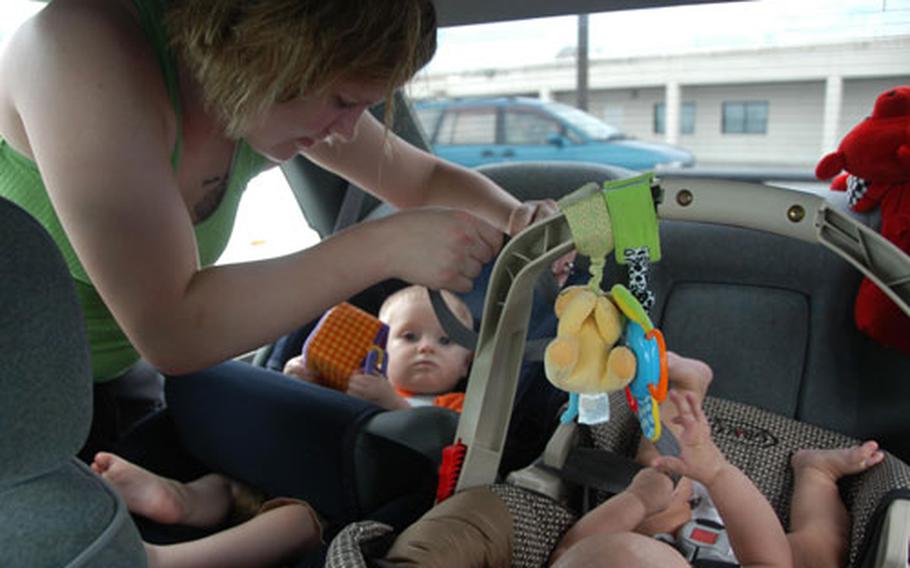 Elizabeth Dickson, left, helps snap in the baby carrier of her friend’s five-month-old daughter, Nasiah Mimms, center, after shopping at the Kadena exchange Monday. Her son, Chandler, 10 months, is ready to ride. Although military bases require all passengers to buckle up on base, a new Japanese law now requires back seat passengers to wear seat belts in town. (Natasha Lee / S&S)

Back-seat passengers now must buckle up under a revised Japanese law put into effect Sunday.

The U.S. military in Japan already requires all passengers in vehicles to wear seat belts on bases. The Japanese law means they now must be buckled off base, too.

Japanese police have increased the number of officers on expressways to send a message to motorists about the new safety law and reminders are posted on roads, said a spokesman for the Okinawa Prefectural Police in Naha.

"It is always desirable to wear a seat belt," the spokesman said.

Pregnant women are exempt from the law because, the spokesman said Monday, cases have shown that sudden seat-belt constriction can cause birth defects or miscarriages. People with stomach injuries and morbidly obese passengers also are excluded.

Previously only drivers and front-seat passengers were required to use belts. The Japan Times, citing National Police Agency statistics, recently reported that fatalities among back-seat passengers not wearing seat belts in a crash is four times higher than for those wearing them.

For now, unbuckled passengers are subject to warnings, with penalties to come after an awareness period, according to the NPA. Police, however, couldn&#8217;t say when penalties would start to be issued. Penalties will call for drivers to lose a point on their record if their passengers are not belted. Tour bus and taxi drivers also face penalties, police said.

Angelique Mimms, whose husband is an airman at Kadena Air Base, Okinawa, said she welcomes the new law, particularly for child safety.

Another revision under the law requires drivers 75 and older to display a momiji sticker on the back of their car. The orange and yellow leaf-shaped sticker helps notify other drivers that an elderly person is behind the wheel.

Other revised laws include one that will allow bicycle riders younger than 13 and older than 70 to ride on the sidewalk, which was previously prohibited. The law also urges child riders to wear helmets, and riders, in general, are discouraged from using cell phones and umbrellas while on bikes.