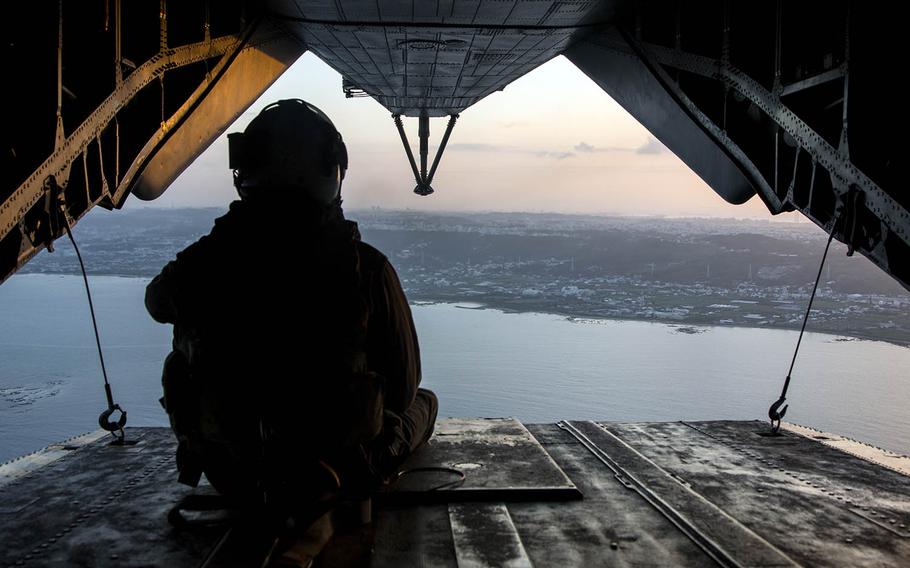 A Marine Corps CH-53 Super Stallion flies off the coast of Okinawa, Japan, July 31, 2017. The Japanese government is reportedly considering the deployment of surface-to-ship missiles on Okinawa's main island in response to Chinese aggression in the area. (Christian Robertson/U.S. Marine Corps)

Japan is already moving forward with plans for anti-ship missiles on Miyako and Ishigaki islands, which are part of Okinawa prefecture, as well as Amami Island in Kagoshima Prefecture.

There have been calls in Tokyo to install the missiles in response to China’s navy transiting the 180-mile strait between Okinawa and Miyako in the East China Sea.

Chinese warships first entered the strait in November 2008 and, since then, there has been a steady stream of repeat visits. The incidents haven’t infringed Japanese sovereignty but have led to military sorties and diplomatic protests.

In January, for example, Japanese officials complained to China’s ambassador after a Chinese nuclear submarine and frigate were spotted near Miyako and the Senkaku Islands.

On Tuesday, Defense Minister Itsunori Onodera denied the reports published by the Asahi newspaper and Kyodo news service about placing missiles on Okinawa.

“Nothing has been decided on the specific direction of the deployment,” Onodera said, according to a Defense Ministry spokesman.

The anti-ship missiles slated for Miyako has a range of about 125 miles. The same type would be stationed on Okinawa if the plan is ultimately approved, Asahi reported.

This would allow for complete coverage of the seas between Miyoko and Okinawa, Kyodo reported.

The Japanese government has budgeted for the Miyako deployment; however, the first missiles won’t arrive until March 2020, a spokesman from Japan’s Ministry of Defense said.

No details or timeline have been provided for the Ishigaki and Amami deployments, the spokesman added.

All of the islands are near the Senkakus, which China calls Diaoyu and also claims. The area surrounding the islands has been the scene of numerous confrontations and disputes in recent years.

Missile deployments to Okinawa’s main island could anger locals. The prefecture hosts more than half of the approximately 50,000 U.S. troops stationed in Japan. A small but passionate protest movement has been fighting for decades to reduce the military footprint on the island.