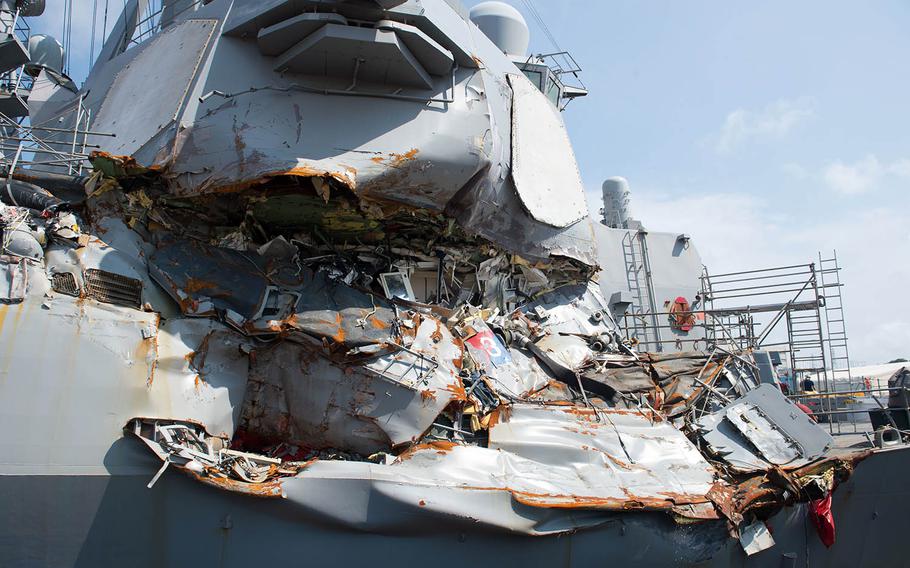 YOKOSUKA NAVAL BASE, Japan — The Japan Coast Guard has recommended negligent homicide charges for the USS Fitzgerald’s officer of the deck and the ACX Crystal’s second officer after a deadly collision last year.

The guidance, announced Thursday, comes after the conclusion of an investigation that determined both officers were responsible for the June 17 incident that killed seven Fitzgerald sailors after the destroyer crashed into the cargo ship about 60 miles southwest of Yokosuka.

He said the coast guard would not identify the ACX Crystal’s second officer out of fairness, because the Navy has refused to name the Fitzgerald officer. Nakamura said the Fitzgerald crew is at fault because the Crystal was traveling on its right side in accordance to Preventing Collisions at Sea regulations. However, the ACX Crystal is also to blame because it failed to take any action to avoid the incident, he added.

U.S. Forces Japan told Stars and Stripes in a statement Thursday that it is aware of Japan’s intent to pursue legal action.

“The sailors involved in the collision were performing their official duties at the time,” the statement said. “Pursuant to the Status of Forces Agreement between the U.S. and Japan, the U.S. has the primary right to exercise jurisdiction for offenses arising out of any act or omission done in the performance of official duties.”

Japanese media are speculating that prosecutors will drop the case against the Fitzgerald sailor because of this caveat.

A Navy report released last year said the Fitzgerald’s officer of the deck “exhibited poor seamanship by failing to maneuver as required, failing to sound the danger signal and failing to attempt to contact [the ACX Crystal] on Bridge to Bridge radio.”

The unnamed sailor also “did not call the commanding officer as appropriate and prescribed by Navy procedures to allow him to exercise more senior oversight and judgment of the situation,” the report said.

The officer of the deck and bridge team also “failed to comply with the International Rules of the Nautical Road,” the report said, adding that the destroyer was traveling at an unsafe speed and failed to maneuver early, notify other ships of danger and take proper actions.

The Navy announced in January that Cmdr. Bryce Benson — who helmed the Fitzgerald during the incident and was injured in the crash — had been charged with dereliction of duty, hazarding a vessel and negligent homicide.

Articles 32 hearings for sailors involved in both the Fitzgerald incident and a later collision that killed 10 USS John S. McCain sailors near Singapore were scheduled to begin earlier this month. However, those have been postponed to an unspecified date after defense attorneys asked for more time.

Cmdr. Alfredo Sanchez, former commander of the McCain, faces the same charges as Benson. Both leaders were relieved of their duties last year.

A chief petty officer from the McCain is facing one charge of dereliction of duty. The executive officers of both ships and a slew of sailors from the Fitzgerald were also relieved of their duties due to “poor seamanship and flawed teamwork,” a Navy statement said.