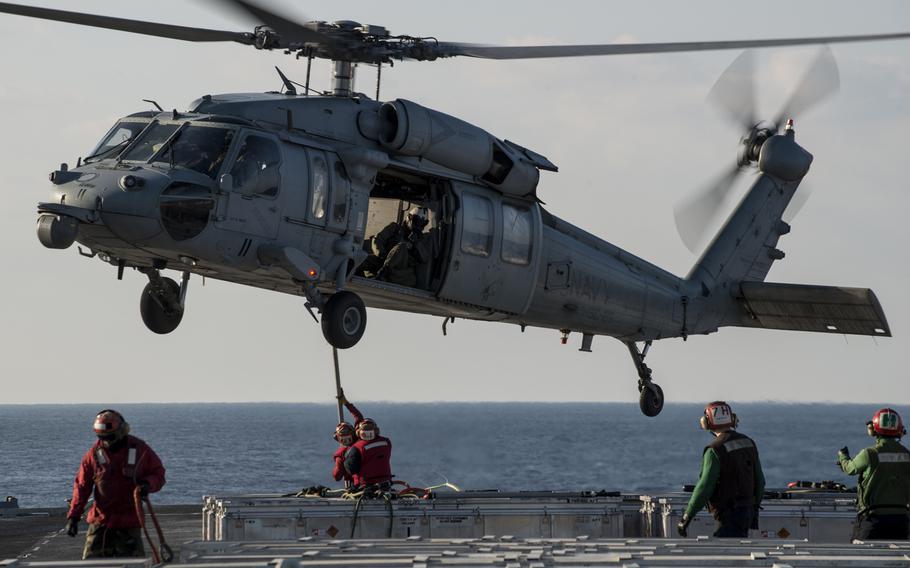 Sailors connect a cargo pendant to an MH-60S Seahawk assigned to Carrier Air Wing 5 while aboard the USS Ronald Reagan in waters south of Japan on Dec. 1, 2015. Japanese lawmakers authorized funding on Dec. 18, 2015, for the air wing's transfer from Naval Air Facility Atsugi, to Marine Corps Air Station Iwakuni, as early as 2017. (Courtesy of Ryan McFarlane/U.S. Navy)

The move of the wing from Naval Air Facility Atsugi, which was delayed three years after an initial 2014 target date, is now progressing rapidly, Japanese officials said.

“Additional cost is budgeted ahead of the schedule based on the progress of facility development at Iwakuni,” a Japan Defense Ministry official spokesman told reporters on condition of anonymity.

The spending package approved Friday also includes 900 million yen ($7.4 million) for restoring 128 acres of land transferred in March to the Japanese government from Camp Foster, Okinawa. Another 300 million yen ($2.5 million) will be spent on the U.S. Navy tarmac within Kadena Air Base in Okinawa, Japanese officials said.

The Japan Self-Defense Forces will also receive funding for disaster relief and anti-terrorism equipment, according to the budget package.

Navy officials in Japan were not immediately available for comment on the Atsugi-to-Iwakuni transfer Friday afternoon. Marine public affairs officials at Iwakuni referred questions to the Japanese government.

Japanese officials have come under political pressure in recent years over aircraft noise coming from NAF Atsugi, which is also home to Japanese Self-Defense Forces aircraft. In July, a Tokyo High Court ruling upheld a lawsuit filed by thousands of nearby residents that would pay out $76 million in compensation for the noise.

Carrier Air Wing 5, which serves as the Yokosuka-based aircraft carrier USS Ronald Reagan’s air component, is part of the wider realignment of U.S. forces in the Asia-Pacific region.

The changes include more advanced ships and other hardware being transferred to the region, as well as reassignment of thousands of Okinawa-based Marines to Guam sometime during the next decade.

In 2013, U.S. Forces Japan told Stars and Stripes that delays in moving support facilities, securing land rights, and building on- and off-base housing at Iwakuni forced Japanese and U.S. officials to revise the Iwakuni transfer to 2017.

The move is expected to roughly double the Iwakuni Marine base’s population to about 10,000 people.

The cabinet will submit its revised defense budget to the Diet next month.