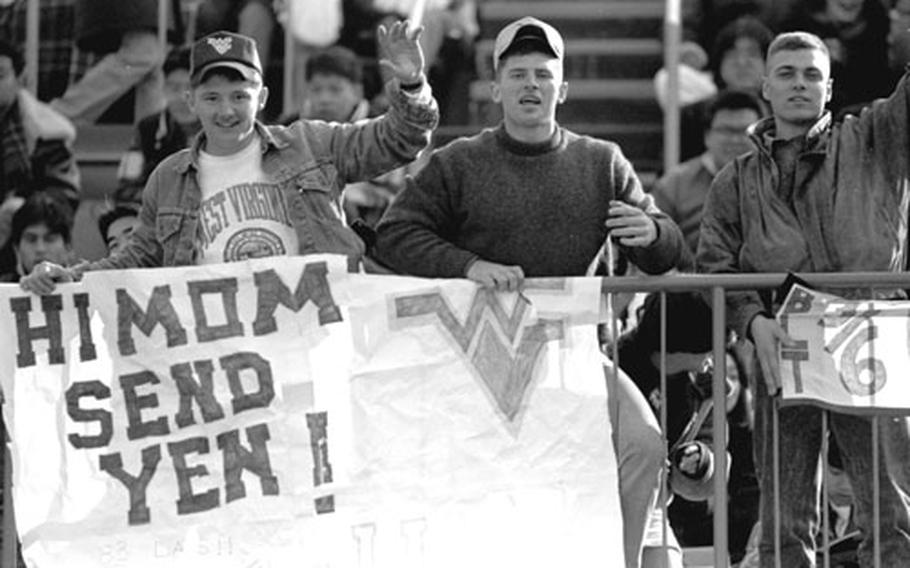 YOKOHAMA, Japan — The Marines had landed, along with more than 29,000 screaming, yellow-and-white streamer-waving Japanese and American fans, on Monday to take in the annual East vs. West college All-Star football matchup in the 1989 Ricoh-Japan Bowl.

The East trounced the West 30-7, the fourth time in 14 tries that the East emerged victorious.

Fans were filled with mixed feelings about the game, since many felt it was one-sided. Others merely enjoyed the hoopla, beer, hot dogs and cheering that go with American football.

Marines Jack Bejo of West Virginia, Harold Loving of Bradford, Va., Gregg Devolpe of Chicago, Eric Barlett of Dearborn, Mich., Andy Link of Richmond, Va., and James Anderson, all assigned to the 3rd Battalion, 6th Marines, descended from their Camp Fuji retreat to take in a bit of extracurricular activity.

"WE'RE HERE TO ROOT for the East," Bejo said, as the others joined in with a hearty cheer for their team. "We're having a great time," Anderson added.

What do you think of the Japanese fans?

"I don't think they understand most of the game," Link said.

"I think they appreciate it, though," Anderson replied quickly. "They seem pretty enthusiastic."

Watching his first American football game, Fujimaki said, speaking through an interpreter, that he was "excited about the players and all of the action going on down there."

Hidaki Yoko, a resident of the Tokyo area, had noticed Sanders' absence, but that did not stop him from coming to the game with his wife, and mother and father, Kiyoshi and Yoko.

As halftime approached, with the East leading 21-7, Yoko expressed disappointment with the way the game was progressing.

"It's pretty boring score-wise," Yoko said. "It's so one-sided. We don't have a star player like we did last year ... maybe it would be a little better game, if we did."

Miho Harai and Bikako Fujimoto didn't really care for the score as much as they enjoyed the fun they were having.

Both residents of Yokohama, the two young women just wanted to come out and enjoy an American sport.

"We really like the way everyone gets involved with the players," Miho said, waving her white streamers for the East team as they advanced downfield.

Akira Horiuchi, 76, also of Yokohama, said, "It's my first time to see an American football game ... it's great."

Commenting on the players and the people, Horiuchi felt that it was just one big "get together" to have a good time.

Many of the fans, Japanese and American alike, felt the game was exciting but "uneven."

But no one argued that the feeling they had was the best score of all.