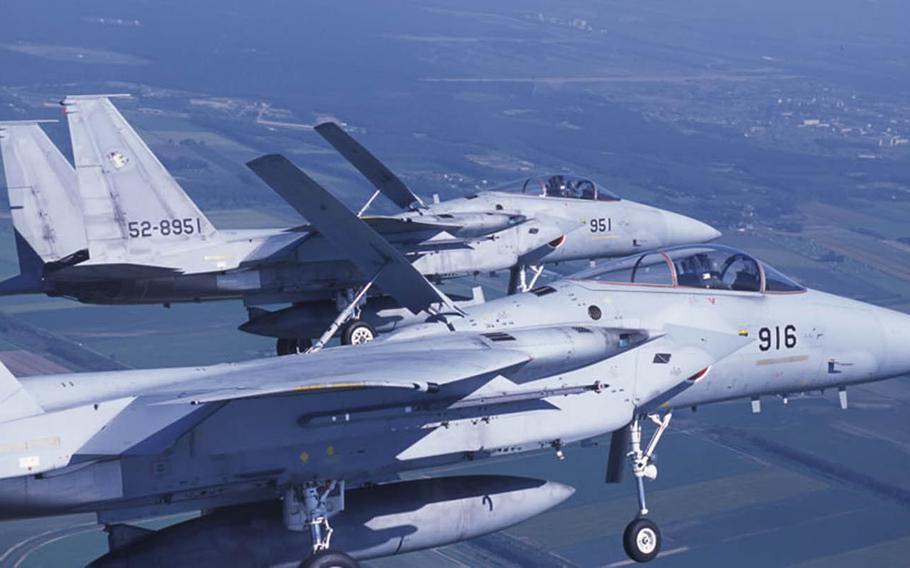 Japan plans to double the number of F-15 fighter jets based in southern Okinawa and establish a new Ground Self-Defense Force base on its western-most island, Yonaguni, in an effort to strengthen its southwestern defenses. (Courtesy of the Japan Self-Defense)

CAMP FOSTER, Okinawa — Japan plans to double the number of F-15 fighter jets based in southern Okinawa and establish a new Ground Self-Defense Force base on its westernmost island, Yonaguni, in an effort to strengthen its defenses in the face of an aggressive China.

The announcement was made Tuesday by Defense Minister Gen Nakatani at a time when China is challenging Japan and its American allies for supremacy in the East and South China seas, most notably for Japan’s resource-rich southern island chain, called the Senkakus by Japan and Diaoyu by China.

Japan’s air force has approximately 20 F-15 fighters at an air base in Naha, an Air Self-Defense Force spokesman said Thursday. Another 20 will arrive from the 304th Air Squadron at ASDF Tuiki in Fukuoka, on the island of Kyushu, bringing the total in two 9th Air Wing squadrons to about 40 with 1,500 personnel.

The new posture will be assumed Sunday. The GSDF base at Yonaguni will be established March 28.

“Both are intended to strengthen the defense architecture in southwestern Japan in a visible manner,” Nakatani told a news conference.

In addition to seaborne threats, the Japanese air force scrambled fighter jets 567 times between April and December in response to incursions into its air space, said a spokesman for the Joint Staff of Japan’s Self-Defense Forces. While it was down 177 sorties from the year before, the trend has increased in recent years. Of the 567 sorties, the majority were in Japan’s southern area of operations, and approximately 66 percent were due to Chinese aircraft.

Russian incursions into Japanese air space decreased dramatically last year from 2014; however, its aircraft still forced 183 Japanese sorties. The U.S. has a mutual defense treaty with Japan and would be required to come to its aid in the event of a confrontation.