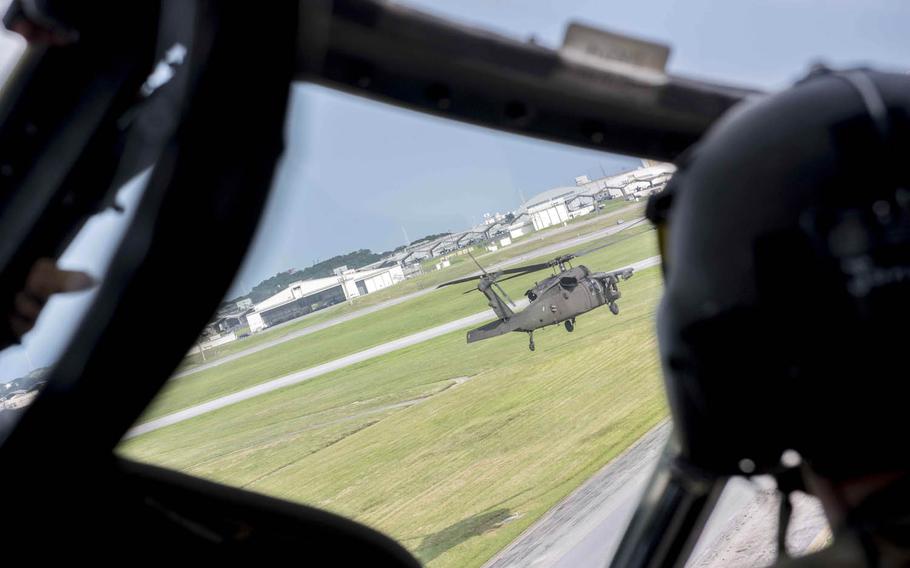 CAMP FOSTER, Okinawa — Pilot error was to blame for the 2015 crash-landing of an Army MH-60 Black Hawk helicopter onto a Military Sealift Command ship off Okinawa’s coast, according to a report by Japan’s Ministry of Defense.

“The U.S. military took this accident seriously,” said the report released last week. “It could not be confirmed that the accident had anything to do with the MH-60 helicopter itself.”

The incident happened during rope-descent drills onto the deck of the USNS Red Cloud. Army investigators concluded that the hard landing, which injured seven and caused $33.6 million in damage, occurred when pilots tried to adjust the Black Hawk’s position and clipped the ship’s bow mast with the helicopter’s main rotor blade, the report said.

The U.S. military provided Japan’s Ministry of Defense with a copy of its report in April, but the government of Japan just released its findings. Ministry officials declined to comment on the report and why it took so long to release it publicly. U.S. Forces Japan officials did not immediately respond to requests for comment.

The helicopter, from 4th Battalion, 160th Special Operations Aviation Regiment, based out of Joint Base Lewis-McChord, Wash., took off from Kadena Air Base carrying 17 personnel on Aug. 12, 2015. Pre-flight inspections had been performed on it and two other Black Hawks participating in the drills, the report said. The Red Cloud — which was steaming at 5 knots per hour about 8 miles east of Ukibaru Island when the incident occurred — had positioned an air-safety management officer on its deck.

Two helicopters successfully performed their mission of roping personnel to the deck of the ship before the third helicopter encountered a problem, the report said. The crash-landing happened at 1:38 p.m. when the helicopter flew from the left side of the vessel to the bow. That is when the Black Hawk’s main rotor blade hit the Red Cloud’s mast about 20 feet up, sending the aircraft to the deck.

Five American and two Japanese servicemembers were injured in the incident, USFJ officials said at the time. The injured were taken to U.S. Naval Hospital Okinawa at Camp Foster.

The Black Hawk’s pilots were suspended from flying pending a retraining program, and were subjected to regular reviews conducted by the Army, the report said. The two other Black Hawks that had participated in the exercise were grounded for four days. A maintenance evaluation was performed, as were test flights to confirm aircraft safety.

Each member of the unit involved was retrained on the proper procedures for pre-flight safety checks as well as safety checks when conducting the same type of rope-descent training, the report said. Unit members were also briefed on the investigation results.

The pilots of the downed aircraft had 2,602 flight hours and 2,017 flight hours respectively at the time, the report said. The helicopter had 671 flight hours until the day before the incident.