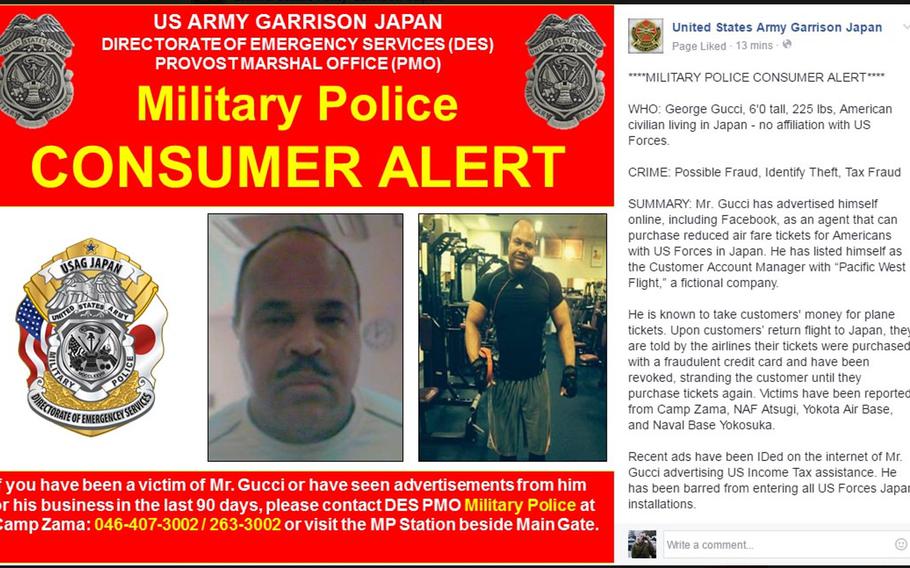 Suspected con artist George Gucci is pictured in this alert posted to Facebook by United States Army Garrison Japan. Gucci is alleged to have bilked U.S. military families in Japan out of more than $20,000 for airline tickets that were never provided. (Web screenshot)

YOKOTA AIR BASE, Japan — Military police say an alleged con artist appears to have bilked U.S. military families on four bases in Japan out of more than $20,000 for airline tickets that were never provided.

George Gucci, a 6-foot, 225-pound weightlifter who sometimes worked out at Yokota’s on-base gym and had a concession to sell furniture at Yokota Air Base last year, has been barred from all U.S. military facilities in Japan, according to a fraud alert released by Camp Zama officials this week that asks people to keep a lookout for him.

“Mr. Gucci has advertised himself online, including Facebook, as an agent that can purchase reduced air fare tickets for Americans with U.S. Forces in Japan. He has listed himself as the Customer Account Manager with `Pacific West Flight,’ a fictional company,” the alert states.

Alleged victims at Yokota, Camp Zama, Atsugi and Yokosuka have been posting warnings about Gucci in online forums since last summer.

Lt. Col. Darrell Sides, the U.S. Army Japan provost marshal, said personnel at Zama complained about Gucci last summer, but that it wasn’t until June this year that authorities became aware of similar airline ticket scams at the other three bases. However, the matter is outside U.S. jurisdiction since Gucci isn’t affiliated with U.S. forces, and Japanese police didn’t initially investigate because the only evidence provided by the first victims were email exchanges, Sides said.

Now security forces from the Army, Navy and Air Force have launched a joint probe with Japanese police, immigration and customs officials to track down Gucci, Sides said.

So far they’ve identified nine alleged victims who claim combined losses of more than $20,000 and say there may be more.

“With this type of crime a lot of (victims) are embarrassed to come forward,” he said.

Jaime Lee, 29, said she was hoping to visit her parents in the states last summer while her husband, an Atsugi-based aircraft mechanic, was deployed aboard the USS George Washington aircraft carrier.

“My son and I were going home for the first time in two years to see family back in America,” she said.

Lee said she met Gucci outside Atsugi’s front gate, after getting his contact details from a friend, and handed him cash for the tickets. They never arrived, and she was forced to buy another set of tickets for $1,900 on her credit card, she said.

Lee said she complained to the base legal office and unsuccessfully tried to track down security camera footage that might have showed her handing over the money to Gucci.

Susan Preston, 53, a substitute teacher at Zama American Middle School, accused Gucci of swindling her family out of even more money last year. He was recommended by other teachers at Camp Zama who had bought airline tickets from him.

“He said he liked to do it for military families and it was a service he provided. We said, ‘OK, we’ll use him,’” she said.

She said her husband met Gucci at an off-base coffee shop and provided their personal details, desired travel dates and more than $4,000 to fly their family of five home to Atlanta to visit relatives.

They began to worry as their departure date neared with no sign of tickets and Gucci not answering calls or emails, she said. Preston’s friends reassured her, saying they got their tickets at the last minute.

Finally, it was too late.

“We were going home to see family so you can imagine how upset we were,” she said.

In the end, the Prestons took space available military flights home and paid another $5,000 to fly back on commercial jets, she said.