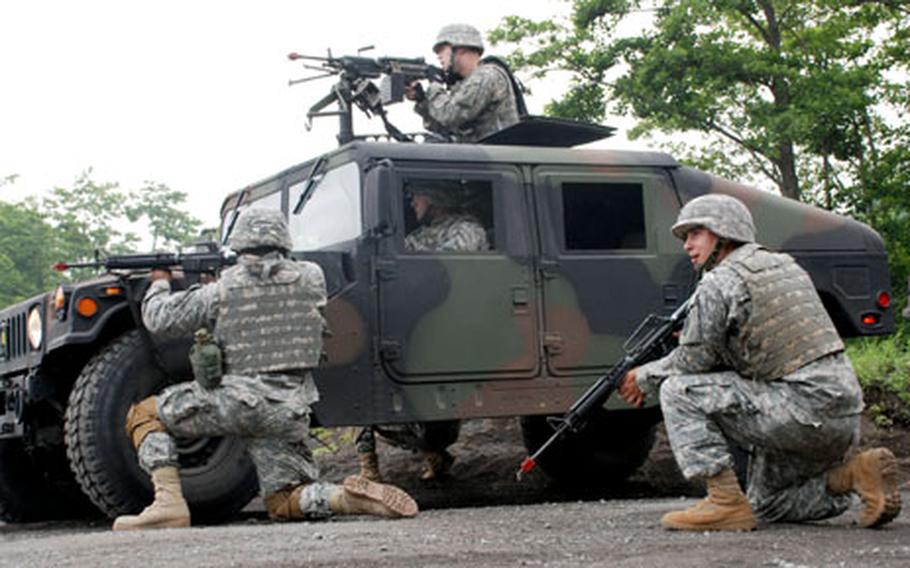 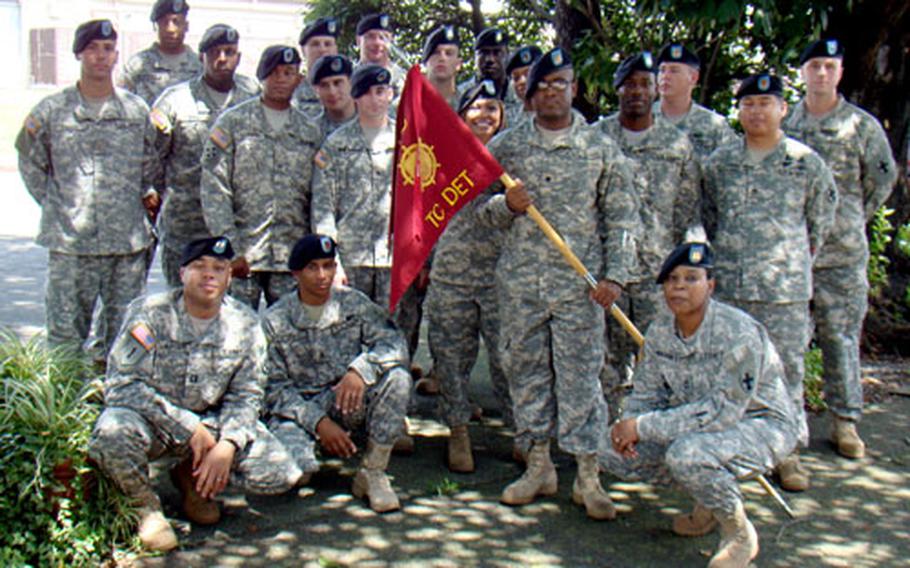 Members of the 623rd Movement Control Team of the 35th Combat Sustainment Support Battalion pose for a group picture at their farewell party on Aug. 15. (Photo courtesy of U.S. Army)

SAGAMI DEPOT, Japan &#8212; It&#8217;s somewhat of an unspoken truth, but for U.S. soldiers in Japan the chances of getting deployed to the Middle East are generally pretty slim.

So on Monday, when the 35th Combat Sustainment Support Battalion&#8217;s 623rd Movement Control Team said goodbye to their families and boarded a bus for the airport, it wasn&#8217;t just another deployment, it was a bit of history as well.

While most wouldn&#8217;t consider the deployment of a 20-member team to Kuwait a major troop movement, it marked the first time a Japan-based U.S. Army unit has deployed to support the war on terror.

The 623rd, for the next 12 months, will be serving at Khabari Alawazem Crossing, also known as "K-Crossing," along the Kuwait-Iraq border.

K-Crossing is where all military traffic must pass through on the way to and from Iraq, said Capt. Joseph Batiste, the 623rd&#8217;s commander. The soldiers will serve with a civilian team to track convoys, check paperwork and work with Kuwaiti customs to keep traffic moving smoothly.

They also will provide convoy commanders with information about potential threats and road conditions that may await.

The 623rd was originally located in the Netherlands but was deactivated and then reactivated with new personnel in Japan in July 2007, said Batiste.

The relatively short time from reactivation to deployment helped foster unit cohesion and gave the junior officers and non-commissioned officers a chance to step into their leadership roles, he said.

"Everyone really came together when it came to doing their mission," said Staff Sgt. Clyde McClendon, a transportation management supervisor. "A lot of us who have deployed before used our experiences to help the younger guys."

However, with time on the training ranges at Camp Fuji and a trip Fort Eustis, Va., to train with the actual battalion they will be under in Kuwait, they were able to make it work, she said.

Watson said many of the soldiers are eager to carry out their mission, "although, it is bittersweet for those leaving families behind."

She added that the deployment did sneak up on some soldiers.

Sgt. Jason Hawthorne said he learned of the deployment the first day he arrived in Japan.

After working to obtain command sponsorship for his wife so she could join him in Japan, Hawthorne said that it&#8217;s a little frustrating to now have to leave her for a year.

"She&#8217;s not too excited about the deployment," he said. "But she knew what she was getting into when she married me."