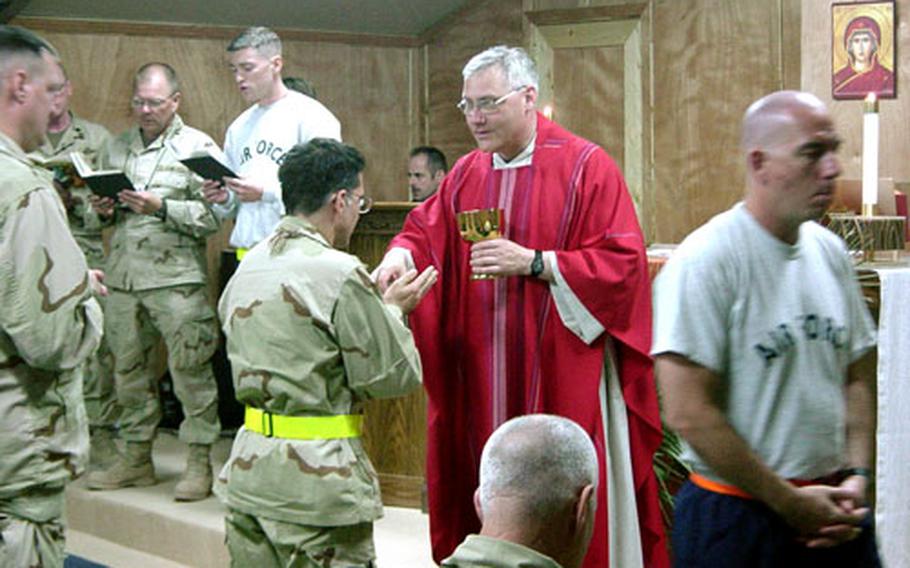 MISAWA AIR BASE, Japan &#8212; The Rev. Jose L. Del Toro, a Roman Catholic chaplain assigned to Misawa Air Base, saw the heartbreaking and the horrific while deployed to Kirkuk Air Base in northern Iraq for 4&#189; months.

He held the hand of an airman with a gunshot wound to the leg, writhing in pain on a hospital bed. He reached for a hand no longer there of a young female soldier who lost her arm and life in a mortar grenade attack. He counseled grief-stricken doctors and nurses who couldn&#8217;t save all their patients.

Death and tears, like the desert&#8217;s dust and grit, were inescapable.

But the 40-year-old military captain said he also saw many people grow closer to God and find comfort in the power of prayer.

&#8220;I had more people question their faith in terms of wanting to deepen their faith and wanting to make a commitment to God again,&#8221; he said in January after returning from Iraq. &#8220;People are alone, they&#8217;re without their spouse and children; they have time to think. They see something lacking in their lives. There&#8217;s ample opportunity to look into your soul.&#8221;

Del Toro was one of two Air Force chaplains at Kirkuk. The 900 or so airmen deployed with him were responsible for supporting about 3,000 soldiers and protecting the base &#8220;so the Army can go home and &#8230; put their guns down for a little bit,&#8221; Del Toro said.

He was the only Roman Catholic priest in addition to the half-dozen Army chaplains at Kirkuk but denomination often was unimportant.

Del Toro said most of his time was spent visiting with troops on base because most Air Force personnel were not allowed off base. He counseled airmen and soldiers, helping them with issues such as depression, adjustment, conflict with a superior, loneliness, mourning the loss of a grandparent and missing friends, family and even the comfort of their sofas back home.

Prayer was an oft-used tool.

Prayer as a retreat from war

The Rev. Gary Linsky, a lieutenant colonel and the command chaplain for U.S. Forces Japan, was the 332nd Air Expeditionary Wing chaplain and for a period the only Roman Catholic priest for about 30,000 people while deployed to Balad Air Base from December 2004 to May 2005.

Del Toro and his troops prayed for peace and for fellow soldiers not so fortunate.

Mass was celebrated daily in a clamshell tent with a concrete floor and small cushioned pews.

The chapel tent also was a retreat from war.

&#8220;When the soldiers came into Mass, they took off their guns, and many times they would bend their knees and just pray,&#8221; Del Toro said.

&#8220;Sometimes you find your faith grows stronger as you witness the faith of those you serve,&#8221; he said.

Many injured troops told their stories to Linsky.

Faith can be vulnerable in war.

&#8220;Sometimes people will see awful things and wonder where is God in the midst of all this?&#8221; Linsky said. &#8220;To question is OK. Some may accept faith because they were given a wonderful gift by their parents but at some point, they have to make it their own.&#8221;

Linsky and Del Toro each performed the anointing of the sick, formerly known as last rites. The prayer usually is reserved for the living &#8212; &#8220;Catholics believe the sacrament is there to aid those who are sick, not necessarily who are dying,&#8221; Linsky said. Del Toro, however, said a prayer of healing for the first Filipino-American to die in Operation Iraqi Freedom, to comfort the living and her family. The 23-year-old woman, who wanted to be a nun, was killed Christmas Eve when her Humvee was attacked by mortar grenades. She died en route to the hospital.

Such tragedy, however, did not shake the priest&#8217;s faith.