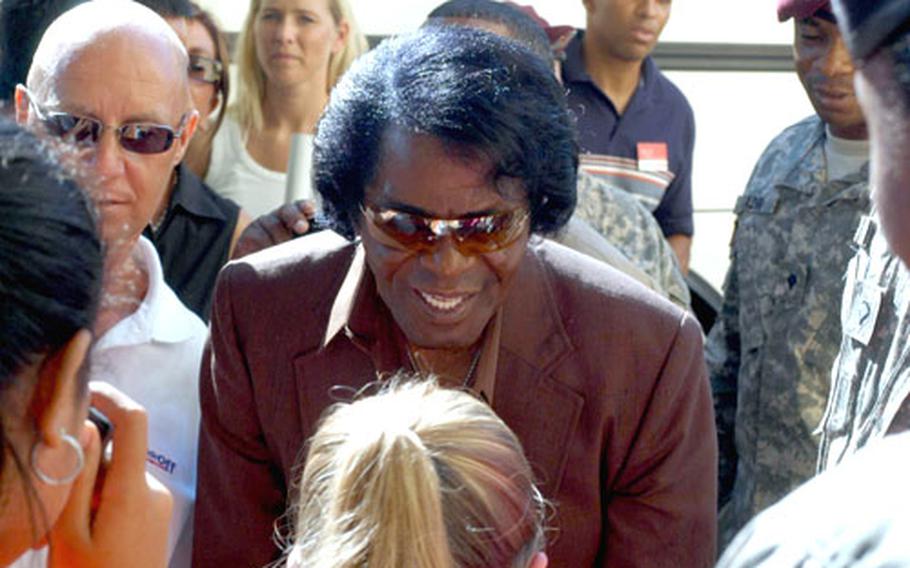 VICENZA, Italy &#8212; Many of those gathered in the post theater Wednesday afternoon weren&#8217;t even alive when James Brown had his first hit.

But the man known as &#8220;the Godfather of Soul&#8221; and &#8220;the Hardest-Working Man in Show Business&#8221; is still going strong at 73, 50 years after recording his first professional success. He&#8217;s currently on a quick concert swing through Europe and was running on a tight schedule Wednesday. But he took time to talk to hundreds gathered, some of them soldiers who have served in Iraq and Afghanistan in the last three years.

And he looked pretty good as well, according to Maj. Gen. Frank Helmick, commander of the Southern European Task Force (Airborne).

Brown answered a few questions from the audience after saying he didn&#8217;t want to talk politics or business.

Brown said he knew servicemembers don&#8217;t debate the merits of their assignments, but are just supposed to follow orders.

Brown told the dozens of children gathered to focus on their education. His father had only a second-grade education, but served his country and is one of the singer&#8217;s inspirations.

Many of those in the audience planned to attend Brown&#8217;s concert in downtown Vicenza later Wednesday. The United Service Organizations sold 129 tickets to the show. Not all of those who wanted to talk to him or get an autograph had their wishes granted as the singer ran out of time. But dozens of people did get in a word or two.

Brown&#8217;s wife, who has reportedly been ill for some time, was treated by Italian medical authorities while he was making his appearance. Base officials said they couldn&#8217;t comment on her condition.