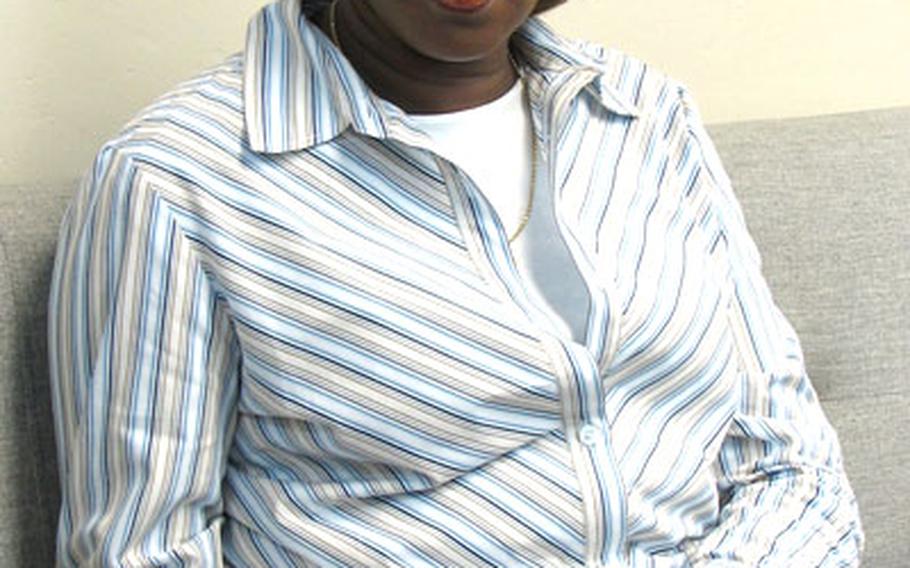 Jacqueline Avinger, the wife of a Marine sergeant awating trial in a Japanese court for robbing and slashing another man&#39;s throat, says she’s been abandoned by friends and the Marine Corps and has just two dimes to her name. (David Allen / S&S)

CAMP FOSTER, Okinawa &#8212; Confused and shaken by her husband&#8217;s arrest on suspicion of slashing another man&#8217;s throat during a robbery, Jacqueline Avinger says she&#8217;s been abandoned by the Marine Corps.

She says no one will offer any assistance for her to remain on Okinawa so she can offer support to her husband while he sits in a Japanese detention center awaiting trial.

Her case highlights what can happen to the families of servicemembers accused of crimes overseas.

Citing privacy concerns, Marine officials would not speak specifically about Avinger&#8217;s case. They say their hands are tied by regulations. In general, there&#8217;s little they can do for the family of a Marine arrested by Japanese police.

&#8220;Once a Marine is in custody of foreign civilian authorities, pay is automatically stopped,&#8221; 1st Lt. Garron Garn, a Marine spokesman, wrote in response to a Stripes query, citing Department of Defense Financial Management Regulation 7A.

&#8220;The Marine is considered to be in a no-pay status and is entitled to two months of Overseas Housing Allowance,&#8221; he wrote.

&#8220;However, if a Marine is in custody of civilian authorities and is not formally charged with a crime and returns to his unit, the unit&#8217;s commanding officer has the option to excuse the absence as unavoidable and the Marine will receive back pay.&#8221;

Just before her husband, Sgt. Michael Avinger, 30, was arrested in the Oct. 25 robbery of Bryant White, Avinger, 45, quit her job at the NCO Club on Camp Courtney in preparation for a three-month vacation to visit her family back in Florida.

The money she had saved for that trip has been spent in the month her husband&#8217;s been in jail.

And to make matters worse, her husband apparently had been renting an apartment near Camp Schwab without her knowledge, and the money from his Overseas Housing Allowance has to go to pay that landlord.

She reached into her purse and extracted two dimes.

Avinger said she was advised by her husband&#8217;s command to sell their furniture if she needed money.

Garn said there are several ways to get emergency assistance in cases like hers.

&#8220;A servicemember or dependent can also apply for assistance from numerous programs and services while living overseas,&#8221; he said.

&#8220;The Navy-Marine Corps Relief Society can provide financial support and guidance, the Chaplain Corps is available for spiritual support, and the Personal Services Center offers many family support programs.&#8221;

On Tuesday, Jacqueline Avinger was given ERD papers by her husband&#8217;s command, and she is making arrangements to have her belongings shipped back to the States.

She said she plans to leave Okinawa on Jan. 6.

She said she also was given a $60 food voucher to spend at the commissary.

Avinger&#8217;s husband was named by White as the man who grabbed him from behind, cut his throat and threw him to the ground in an attack that took place on Hamahiga Island.

White, 22, a former airman, said he was lured to the island on the promise of meeting up with some women and was attacked by Avinger and Darian Preston Daniels, 29, the husband of a sailor.

Daniels also is being held in the Naha Detention Center awaiting trial on a charge of robbery resulting in bodily injury.

Jacqueline Avinger said she knows nothing of the incident.

She said her husband has had few visitors since his arrest and soon he will be without her.

&#8220;At first, I was told I had to stay here for the Japanese police to speak to me and, while I waited to see what that was all about, his pay was stopped and I started running out of my own money.

His command said there was nothing they could do to help me and didn&#8217;t offer me a dime for food or anything.

What the Marines can do for a suspect

Marine Capt. Dennis Hager, the Japanese jurisdiction attorney for the Office of the Judge Advocate, Marine Corps Bases Japan, said people arrested by Japanese authorities are given various other levels of assistance.

&#8220;We help with the gomen nasai process, which is the traditional symbol of remorse, by presenting money in an envelope &#8212; or just flowers or pizza in minor crimes &#8212; to the victims,&#8221; he said. &#8220;The Japanese jurisdiction officer also visits the accused and gives him a status of forces briefing.&#8221;

He said the command usually supplies the accused with a change of clothes and reading materials. Also, a military attorney and translator attend all hearings to ensure the defendant&#8217;s rights are protected. The Marine Corps will also provide the defendant with a list of approved Japanese civilian attorneys and pays their fees, Hager said.

While awaiting trial, the only people permitted to visit an incarcerated defendant are his family, a command representative and the Japan jurisdiction officer, he added.