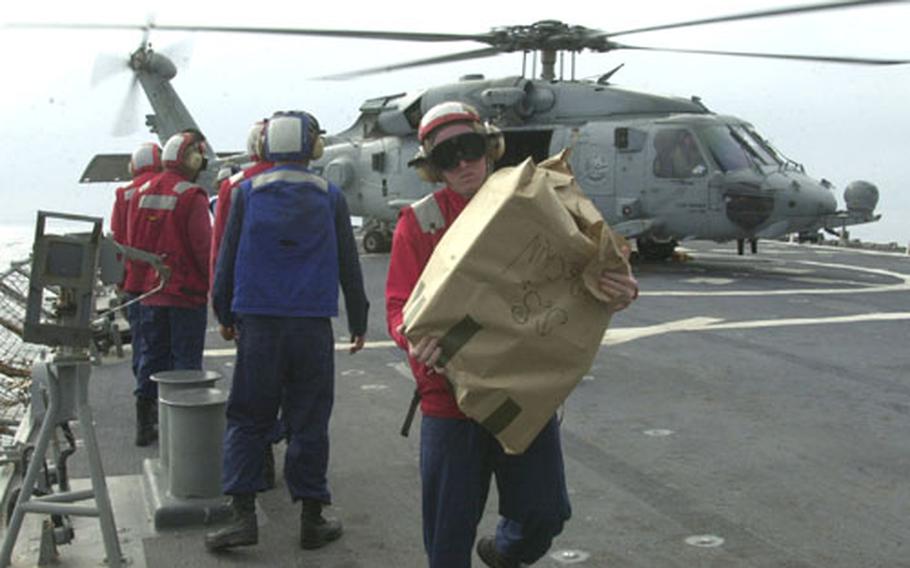 Sailors from the USS John S. McCain carry in spare parts brought on board by helicopter. The McCain returned to Yokosuka on May 6 after a long deployment to the Persian Gulf. (Joseph Giordono / S&S)

Sailors from the USS John S. McCain carry in spare parts brought on board by helicopter. The McCain returned to Yokosuka on May 6 after a long deployment to the Persian Gulf. (Joseph Giordono / S&S)

Ensign William Carr (foreground) takes a sextant reading as the USS John S. McCain approaches a Navy fueler off the coast of Japan. The McCain returned from the Persian Gulf on May 6. (Joseph Giordono / S&S)

ABOARD THE USS JOHN S. MCCAIN &#8212; When the history of the second Gulf War is written, crewmembers of the destroyer USS John S. McCain could argue they deserve a whole chapter.

They were, in the words of their commanding officer, Cmdr. Kevin Campbell, &#8220;the most sought-after free agent out there.&#8221;

After heading to sea on an emergency deployment Jan. 21, the McCain sailed to the Persian Gulf with the aircraft carrier USS Kitty Hawk and the guided-missile cruiser USS Cowpens. Once it reached the Gulf, though, the McCain was called on for a series of diverse missions.

It would see the Kitty Hawk once before leaving the Gulf via the Straights of Hormuz. On Tuesday, the McCain pulled back into port to a rousing welcome by friends and family.

As the ship traveled up the coast of Japan earlier in the week, sailors recounted a deployment like none other.

The small-boat teams were part of a multinational force clearing the area of mines, protecting humanitarian aid ships headed for Umm Qasr and searching for small Iraqi boats trying to smuggle people or weapons.

The teams faced many threats &#8212; suicide boat squads, floating mines, artillery from the shore. Under the command of an Australian warship, they lived on a Polish navy ship called the Cznernicki Orp.

At one point, one of the McCain teams nearly got lost during a freak storm in the Gulf. On another mission, members discovered Iraqi tugboats towing mine-laden barges.

In all, the small-boat teams spent two weeks on the mission. During the same period, the McCain had another important task: firing Tomahawk cruise missiles at targets deep within Iraq.

The ship originally was designated as a secondary launch platform but circumstances had it firing almost every day for two weeks straight.

All the training and mock launches the crew completed over the past months were nothing compared with the real thing, sailors said.

One launch, however, was even more memorable than the first. On the second night of launches, one of the Tomahawks malfunctioned shortly after being fired.

&#8220;Normally, the sound is like someone put a shotgun next to your ear and fired. Then you hear it fly off,&#8221; said Petty Officer 3rd Class Christopher Langteau, who escorted news crews onto the ship to film the launch.

The missile spiraled several times directly over the ship, dipped its nose downward and crashed into the sea just a hundred feet from where it was launched.

The missile narrowly missed the ship, providing everyone aboard with an impressive war story. Videotapes of the haywire launch, recorded both by the news crews and sailors with personal video cameras, are on almost constant rerun aboard the ship.

Now the McCain sailors are home, and they can share those stories with their families and friends. They are expecting a three-week stand-down. Then it&#8217;s back to work.

&#8220;I think we counted 256 days under way last year, and we&#8217;ve already racked up 100 for this year,&#8221; said Petty Officer 2nd Class Travis Peterson, whose wife won the First Kiss raffle and was waiting for him on the pier with their twin 4-year-old daughters.