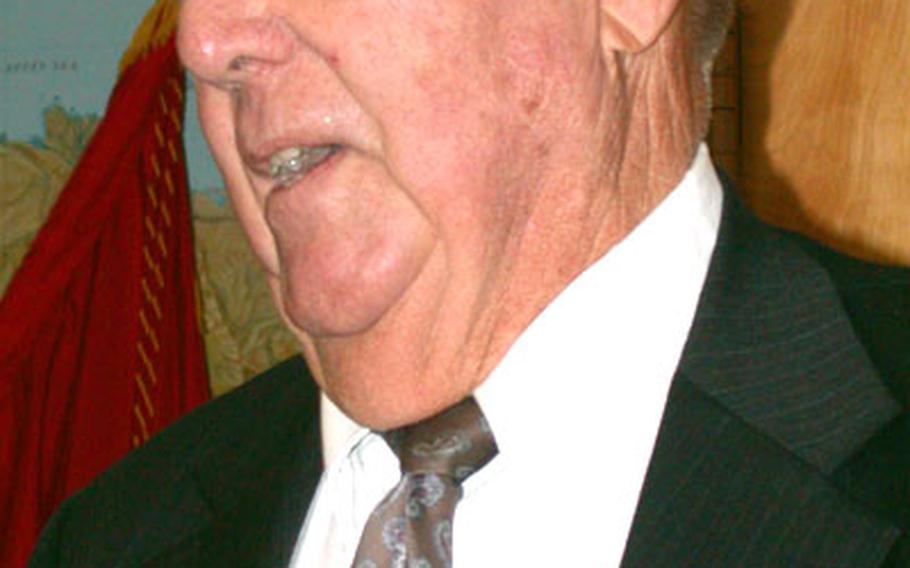 Tom Porter, 77, thanks his family, friends and the Marine Corps for all the “fuss” made over a ceremony in which the former Marine Corps private was awarded the Purple Heart — 58 years after Porter was injured while fighting with the Corps’ 3rd Marine Division on Iwo Jima. (Sandra Jontz / S&S)

Porter, now 77, was wounded as he fought with Marines of the 3rd Division in the battle to capture the Japanese island of Iwo Jima.

On Tuesday, he shifted uncomfortably in his seat as Lt. Gen. Robert Magnus, deputy commandant for Programs and Resources, took center stage of the commandant&#8217;s theater at Marine Corps Headquarters in Arlington.

Porter on occasion reached to squeeze the hand of his wife of 51 years, smiling when she squeezed back. She&#8217;s his anchor.

On March 7, 1945, the rifleman, then an 18-year-old private, was carrying a litter loaded with ammunition to gunners manning the frontline when, during heavy combat with the enemy, he was shot.

But Porter never was presented with the Purple Heart, created by George Washington and the first American award given the common warrior.

No one really knows why the Corps never awarded him the medal. And for several reasons, Porter never bothered to pursue getting it, though his service record annotated he merited the award. He thought asking for it was self-promotion, not in his character.

The service record notation allowed him to collect his disability check, &#8220;and I figured I was getting well paid,&#8221; he said. He fought for 10 days on the island, and his treatment for his injury meant leaving behind his comrades. For that, he still feels guilt. In the battle for Iwo Jima, 5,931 Americans were killed and 17,372 wounded.

But bottom line, everyone who needed to know, already did.

Magnus praised the former young private and his fellow Marines.

&#8220;His platoon and rifle company were involved in tremendously personal, intense and violent combat against a determined, and quite frankly, a very professional and dedicated foe,&#8221; Magnus said. &#8220;We didn&#8217;t like the Japanese &#8230; but we certainly came to respect the tremendous dedication of them.

The Corps&#8217; leaders addressed what had been left unfinished for nearly six decades, said Tom Davis, a family friend and former soldier who retired a colonel after 25 years in the Army.

And so, from their Madisonville, Ky., farm, Tom and Kathleen Porter traveled to Virginia for a ceremony attended by some 25 people, and which brought tears to the aging man&#8217;s piercing baby blues.